SYNOPSIS: Selina has worked hard to establish herself as the queen of Alleytown. But in response to Catwoman saving Poison Ivy from extermination at the hands of Saint Industries, Simon Saint has sent in the early stages of a totalitarian force that has left her kingdom shuttered. Catwoman has seen a man take his own life to avoid the consequences of crossing Saint Industries, so she knows there is no telling what they have in store for her and her gang of strays. And to make matters worse, Alleytown’s eerily quiet and empty streets now set the stage for the long-awaited confrontation between Catwoman and Father Valley! 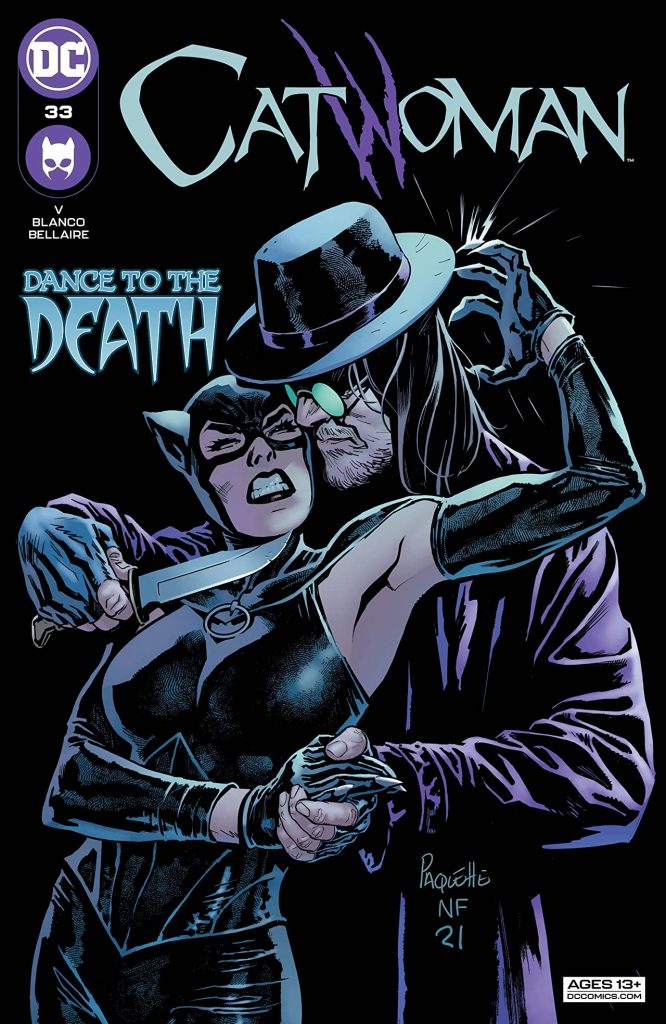 An explosion at a church sets off a series of riots on the streets of Alleytown.  Selina knows that Father Valley is behind the arson and is lurking somewhere close by.  Due to the civil upheaval, the mayor of Gotham has unleashed the Magistrate to set things in order and Selina must get as many of her people out of the city before things go from bad to worse!

So hey, do you remember that experimental thing that DC did earlier this year called Future State?  Do you remember how there were a few titles that were decent, but on the whole, that experiment yielded very lukewarm results?  Yeah, I remember that, too.  This is why I’m confused about the fact that they seem to be adamant about doubling down on that premise in these current titles, including Catwoman.

Over the last couple of issues, this book has turned from excellent to mediocre.  Now, I could simply blame the writing, and I think that’s part of it, but I also believe that there are things going on at DC that are forcing writer Ram V’s hand.  I’m wondering if he actually wants to use the Magistrate in this story – I’m guessing the answer is “no,” because honestly, it feels shoehorned in.  In the first few issues of this new arc, Ram V was building a captivating and complex crime story, and now all of that appears to be dissolving (and I hope not for good).

I wish we could make a clean break from that Future State nonsense and let these books be what they are.  They don’t need to “build” to anything – especially something as weak as what Future State had to offer.

Fernando Blanco and Jordie Bellaire are back on artist duty this month, but there isn’t much visual excitement to be had in this issue.  It’s serviceable stuff, but in no way does it feel inspired.

This is another lackluster issue.  This story would be much better if we could just leave FUTURE STATE in the past. – John Funderburg

SYNOPSIS: Melinda Zucco’s connection to the man who killed Dick Grayson’s parents wasn’t a surprise to the Blüdhaven hero, but what the former Robin discovers about Melinda’s ties to the Flying Graysons leaves the usually upbeat detective speechless. 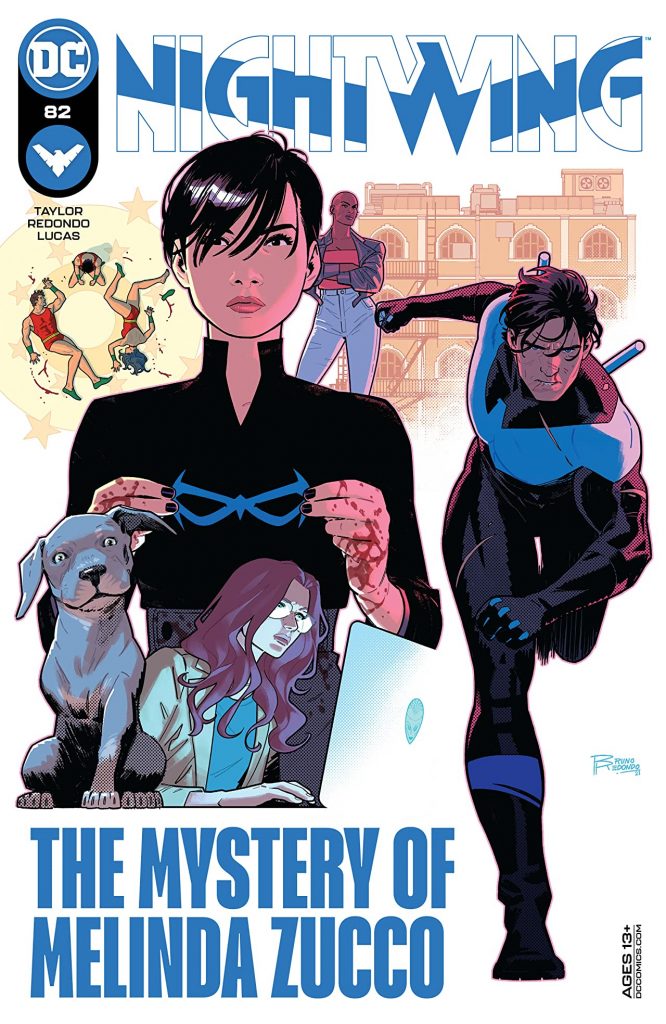 The plot twist in NIGHTWING #81 didn’t work for me. And that’s fine.

But first a rant.

I wanted to wait and read Melinda Zucco’s backstory before passing judgment on it. Now that I know more, I’m still not sold on the necessity of Dick Grayson and having a sister (or in this case a half-sister).

With Grayson’s origin having already been expanded upon in the COURT OF OWLS and the villain Raptor being tied to Grayson’s past when REBIRTH hit, this feels redundant. The well is drying up for new Grayson origin twists.

It also adds a personal element to why Tony Zucco killed Dick’s parents as opposed to it being an act of violence over protection money. It’s my preference that things don’t become too personal which is why — my personal opinion — the “Epilogue” episode of JUSTICE LEAGUE UNLIMITED didn’t gel with me either.

You could take away the sister thing and Melinda’s origin, told by her mother Meili Lin, would still be a compelling story. They could have grown up at Haley’s Circus, been guests at the circus, and knew Dick’s parents, or you could actually make her Zucco’s biological daughter who hates the family business.

When you go the space opera route and pull the father/sister card it doesn’t feel sincere after a while. This is especially true for me when it comes to Batman characters because random acts of violence are more grounded than bloodlines and destiny are.

All that said, I’m not going to take anything away from what is a well-written tragic yet heartfelt story by Tom Taylor.

We learn that Lin was Zucco’s abused wife and a victim of human trafficking. She escaped from Zucco at Haley’s Circus and was protected by John and Mary Grayson. She had a relationship with John (before he and Mary were an item) only to be abducted by Zucco again.

Nightwing comics have had some great flashbacks and NIGHTWING #82 is no different. It’s wonderful to see the Graysons being noble and just as caring as their son. You will get worked up into a rage seeing the way Zucco treats Meili.

Usual tip of the hat to the art by Bruno Redondo, this time with Rick Leonardi and Neil Edwards joining in on the fun. There’s a sense of graininess to the flashback sequences that feel like something you’d see in a 1970s movie. Well done, all!

NIGHTWING #82 may get nitpicked by me but nitpicks should not prevent one from judging the story as a whole. – James Armstrong