SYNOPSIS:  Welcome to hell–a.k.a. Belle Reve, the prison with the highest mortality rate in the US of A. Where the worst Super-Villains are kept and where they will do anything to get out–even join the super-secret, super-shady Task Force X. Today’s do-or-die assignment? Assemble a collection of cons, including Bloodsport, Peacemaker, Captain Boomerang, Ratcatcher 2, Savant, King Shark, Blackguard, Javelin, and everyone’s favorite psycho, Harley Quinn. Then arm them heavily and drop them (literally) on the remote, enemy-infused island of Corto Maltese. Trekking through a jungle teeming with militant adversaries and guerrilla forces at every turn, the Squad is on a search-and-destroy mission with only Colonel Rick Flag on the ground to make them behave…and Amanda Waller’s government techies in their ears, tracking their every movement. And as always, one wrong move and they’re dead (whether at the hands of their opponents, a teammate, or Waller herself). If anyone’s laying down bets, the smart money is against them — all of them. 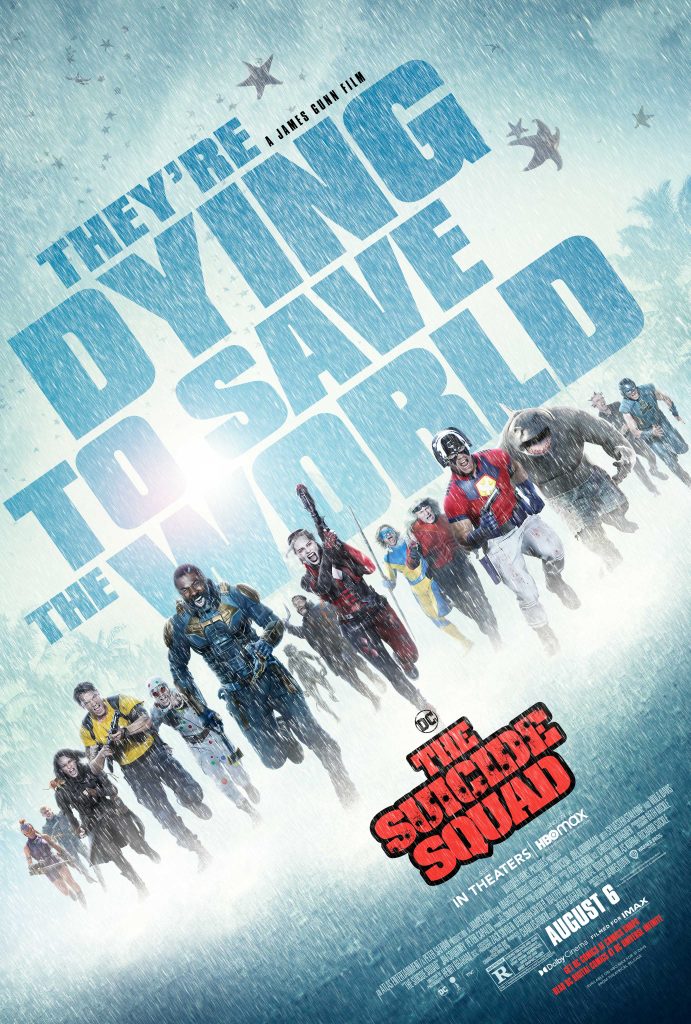 THE SUICIDE SQUAD is one of the best comic book movies to date — no matter which publisher’s characters on which it’s based.

Before I get into the film itself and why I enjoyed it so much, let me put out a disclaimer/FYI: I watched TSS for the first time on HBO Max.  I could not make the local press screening here in Dallas this past Tuesday, so I had to make do by streaming it as soon as it dropped.  I do plan to talk about the big-screen experience on an upcoming BOF Social Hour.  ANYWAY…

It’s not often that a movie that’s not very good or just downright bad gets a sequel…or at least a do-over.  Personally, I didn’t hate the David Ayer-directed SUICIDE SQUAD back in 2016; I found it to be kinda OK.  The main villain and the third act were terrible, but SS‘s had a great cast and their chemistry kept it — for me at least — from being downright terrible.  With all that said, compared to TSS, well, there is no comparison quite frankly.  TSS > SS by MILES.

The premise of James Gunn’s kinda/sorta sequel but really a standalone reboot of a film is straight-up what the Suicide Squad is all about.  Supervillains housed at the Belle Reve Penitentiary under the control of Amanda Waller (Viola Davis) are recruited to be part of “Task Force X” — a black ops program of the U.S. government — when significantly desperate times call for significantly desperate measures.  In exchange for “volunteering” their services, these inmates can get a good chunk of their sentence reduced.  Y’all know the drill.

In TSS, shenanigans on the island of Corto Maltese (Thanks Frank Miller!) require the services of not only one Task Force X, but two of ’em!  The mission?  Take out this secret experiment that’s taking place on the island known as “Project Starfish.”  One team is lead by Col. Rick Flagg (Joel Kinnaman) and the other by Bloodsport (Idris Elba).  When Flagg’s team — which includes holdovers from the 2016 film like Harley Quinn (Margot Robbie) and Captain Boomerang (Jai Courtney) — is hit hard by the Corto Maltese military, the two teams are forced to merge.

Yep, right from the very beginning, Gunn shows that no one — and I mean NO ONE — in Task Force X is safe.  So don’t get too attached to any of these characters!  But therein lies the rub — Gunn makes us care for just about every single one of the characters no matter how weird, goofy, or downright bad they are.  Thus, no matter how violent this movie is — and trust me, it’s violent AF and certainly the goriest and bloodiest “superhero” movie we’ve seen — it’s still funny AF too and has A LOT of heart.

James Gunn must get a lot of credit for taking obscure and silly characters such as Polka-Dot Man (David Dastmalchian), King Shark (Sylvester Stallone), Peacemaker (John Cena), and Ratcatcher II (Daniela Melchior) and make them come off looking, well, not silly at all.  Well, OK, they still are silly and preposterous, but that’s what’s so great about them.  It takes a skilled writer and director to do that, and Gunn pulled it off flawlessly.

I loved this movie, bottom line.  Thinking back, this is probably the first DC movie, period, that I’ve enjoyed this much since THE DARK KNIGHT RISES in 2012.  Of the movies that are part of the “DCEU” that commenced with MAN OF STEEL in 2013, I’m having to move WONDER WOMAN down just a notch and place THE SUICIDE SQUAD at the top of the list.  And frankly, I enjoyed the fact that this was indeed a “James Gunn” film that stands on its own and isn’t beating the audience over the head with, “Hey, it’s all CONNECTED!”

Now, a couple of more things…

The film’s music soundtrack is fantastic!  When you kick off a film with Johnny Cash’s “Folsom Prison Blues,” you sure as hell ain’t doing wrong.  AND…

Stay through the end credits, as there are a couple of post-credits scenes.  And no, they are not MCU’ish, if you will, and are directly related to THE SUICIDE SQUAD and its universe. – Bill “Jett” Ramey

Happy 25th Anniversary to BATMAN: MASK OF THE PHANTASM!