SYNOPSIS: Batgirl sets off on the warpath after she learns Jimmy “The Jazzman” Peake is free and back out on the streets. She’ll do anything to capture him again especially after what Jazzman did to her father, even if it means disobeying Batman. But can she capture the criminal before he’s taken by another mysterious vigilante hitting the scene? 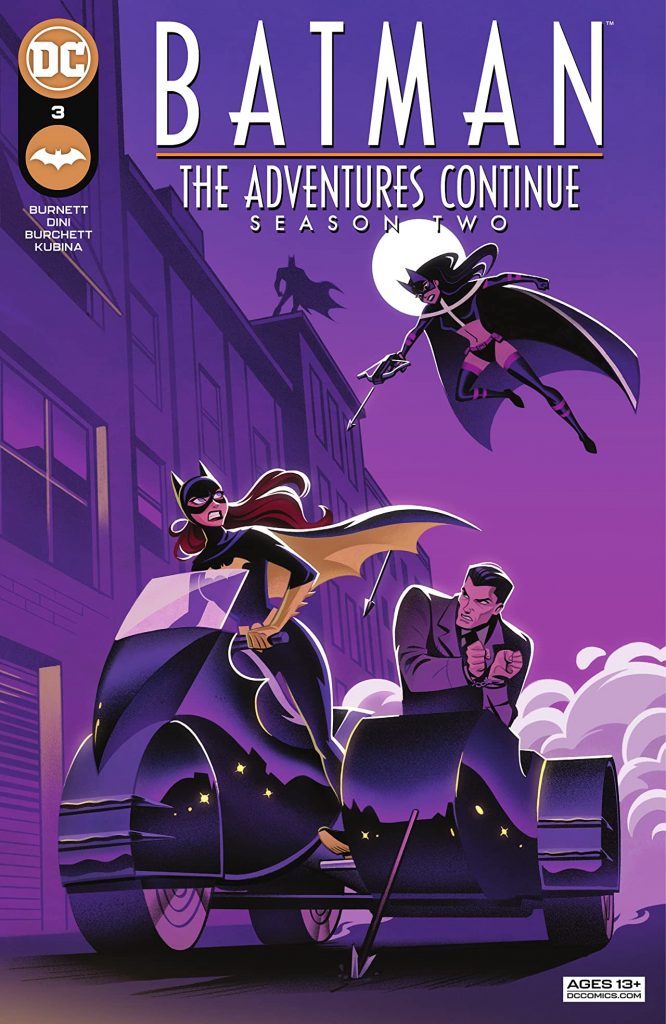 I’ve no shame in admitting that when I reached the end of issue #2 and saw the blurb announcing the return of Jazzman that I let out a confused, “Who???”

So, to the Google I went and I was promptly reminded that we had seen the character before (hence the return part), in the Batman: The Animated Series episode, “I am The Night”. Yes, the episode that spawned the Batman facepalm meme also has another claim to fame!

For those that have forgotten and don’t have their HBO Max subscription handy, the Jazzman in that episode shoots Commissioner Gordon. Much like Victor Zsasz, Jazzman marks his body after his kills with a tattoo of the tune he was whistling at the time of death. Since Gordon didn’t die, the tattoo remains unfinished.

As this issue opens, we learn that Jazzman has not only escaped from Stonegate a month ago, but he is extorting Black Mask. The Batman is hot on his trail, confronting Black Mask for any leads, but gets interrupted by the arrival of Batgirl.

It seems that Batgirl has been sidelined on this case, due to her emotional involvement. When Batman still won’t allow her to join him with his investigation, she strikes out on her own, eventually beating the Dark Knight to their prey.

This is where it gets complicated. Huntress enters the fray. Having been introduced in this universe on Justice League Unlimited, Burnett and Dini provide her backstory for this continuity, and you guessed it, it’s tied in with Jazzman, who in this reality, is connected to the murder of her family.

Batman largely takes the backseat for this issue as Burnett and Dini shine the spotlight on the two heroines who have different objectives when it comes to dishing out justice. This isn’t a team-up in the vein of “Girls Night Out” where it’s a fun, lighthearted romp. There’s an edge to this story that I doubt you’ll find in say, the Scooby-Doo comic. As such, it makes for a very entertaining narrative as these characters are allowed depth and complexity.

The continuity helps make it a worthwhile read for those invested in this universe. It really feels like an adaptation of an episode you never saw. Adding to that feeling is the art of Rick Burchett.

Burchett is no stranger when it comes to the animated line of Batman books. He’s a veteran of several iterations, including winning Eisners for his work on The Batman and Robin Adventures and Batman: The Gotham Adventures. His work is just as synonymous as Ty Templeton’s for me when it comes to the Timmverse. In fact, I didn’t even know he was doing this book and by the second page, I had to flip back to the credits to see who did the inking because I thought Templeton’s line seemed a bit lighter!

However, I was wrong! Burchett has made a triumphant return to this incarnation and dazzles! It’s an amazing juggling act-staying on model, yet having his style shine through, but he does it with aplomb, giving an edge to the art, but still making it feel cohesive with what Templeton has been doing in the proceeding issues. Having Kubina still on colors adds to the consistency, but dare I say she expands the palette? The shades depicted seem more intricate to my eye. Or perhaps Burchett adds just a little bit more detail for her to work with, resulting in more opportunities for color variations?

Seeing “The Jazzman Returns” doesn’t get the pulse-pounding like the hype for B:TAS versions of The Court of Owls or Azrael as Batman, but I was really surprised with how much I enjoyed this issue. It’s so well crafted and delivers on bang-for-your-buck value. As far as done-in-one stories go, this is a very satisfying read, offering solid art and a satisfyingly dark ending. More of this, Burnett & Dini! – Javier E. Trujillo