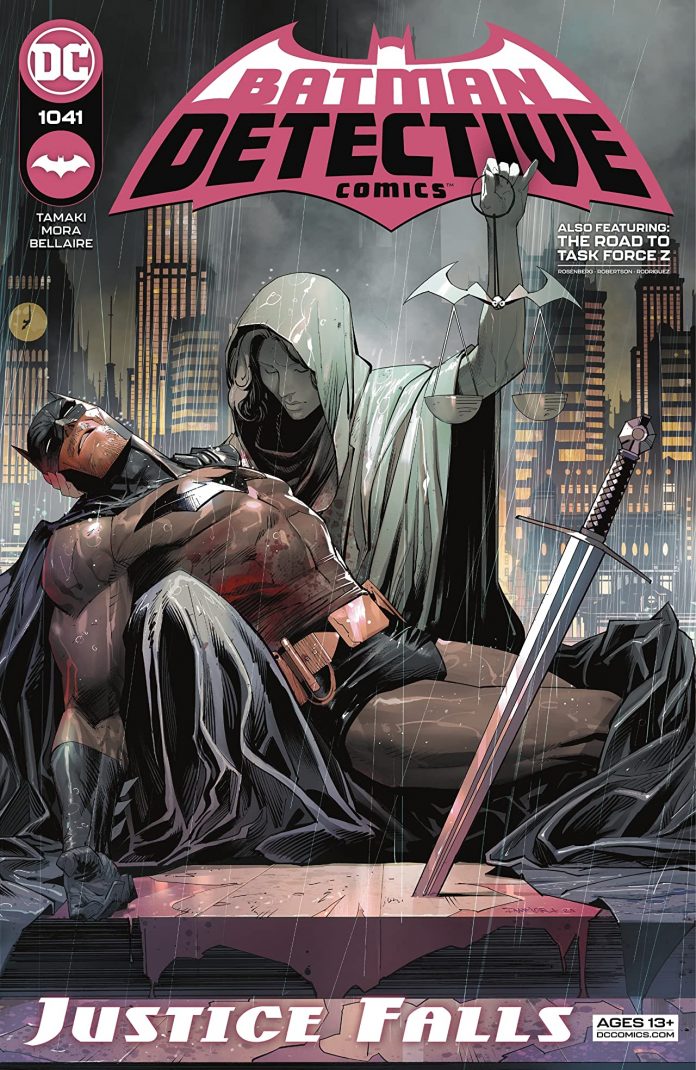 SYNOPSIS: As Gotham’s Dark Knight of vengeance, Batman is seen by many (mostly criminals, let’s be honest) as judge and executioner of the city’s vilest villains. Well, it’s time for him to meet the Jury! In a last-ditch effort to avenge his daughter’s death, Mr. Worth has teamed with the Penguin’s criminal empire, the Party Crashers gang, and the Falcone crime family to form the kind of villain team-up that would leave a Boy Wonder sweating in his booties. Backup: Countdown to Task Force Z: Part One! Deb Donovan is on the trail of some weird happenings in Gotham…missing bodies from the morgue…tales of shady criminal activity the likes of which Gotham has never seen…and the person trying to keep her quiet is…Batman? 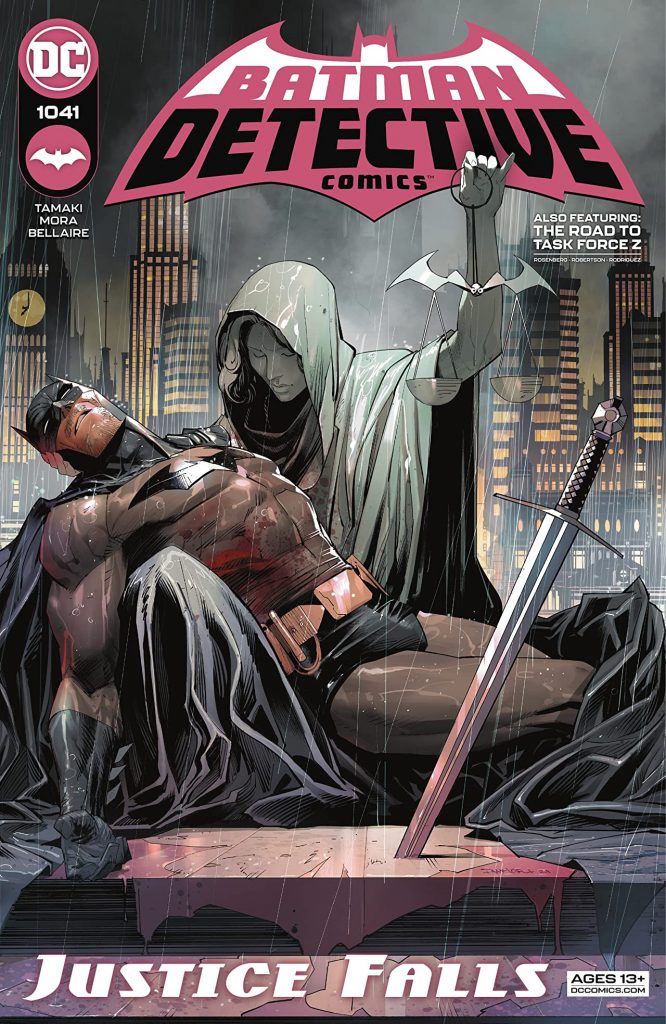 Detective Comics under Mariko Tamaki is a slow burn type of story.   Since issue #1034, Tamaki has brought this TV show drama vibe to the story, featuring a new Bruce Wayne who is down on his luck in a unique brownstone setting.  Gone are the millions of dollars and the privacy of the Gotham Palisades. Now Batman finds himself in constant close quarters sicario not only at night but during the day.  Tamaki guides the reader in this issue across all the significant players’ paths, Mayor Nakano, Roland Worth, his new associates, “the Jury,” and most importantly, our star Bruce Wayne/Batman.

While I have enjoyed Tamaki’s run since taking over writing duties in this title, it’s been eight issues now, and things are starting to feel repetitive.  The storytelling is excellent, and we have a new foe in Roland Worth who might be Batman’s most formidable foe in recent years.  A hulking brute on par physically with Bane combined with the finances surpassing the Wayne’s and now the newest member of the Gotham Underground.  I feel like the last three issues have been a bit been there done that.  We get some excellent exposition with Bruce and Oracle. We learn that Worth has no limits in Gotham as he destroys one of Batman’s micro-caves, but again, it comes down to a bombastic no holds barred finish with Batman, Worth, and “the Jury.”  Tamaki writes one hell of a monologue about Bruce reminiscing the lessons taught to him by his father, and the conversation between Batman and the Jury is fascinating. You will hang on to every word as Batman drops truth bomb after truth bomb.  Tamaki does have a flair for the dramatic and ends the book and an incredible cliffhanger that puts the Dark Knight in a place that we have only seen in Denny O’Neil’s Venom.

Batman fans are going to be talking about this era of Batman artistically for a long time.  Between Jorge Jiménez on Batman and Dan Mora on Detective, this will go down as one of the best periods of Batman’s artistic history.  Mora delivers a full-on splash page extravaganza this issue.   The page with the Batgirl suit in the background and Babs in the clock tower will have fanboys drooling for a second straight issue.  Batman atop of Gotham Square as the Jury taunts him is a lock screen dream.  The panel of Batman surrounded by fire, gunshots, and smoke will bring you back to Batman Forever.

Mora provides stunning fight scenes and action in the most unique panel placement you will see in a comic this week; this is the Mora signature.  Not only can this man draw, but it’s how he displays his artwork. I can only explain it as creativity surrounded by creativity. I will need to ask Paul Herman if he has ever seen an artist pull off something like this.  Paul loves his nine-panel grids.

I must get this out of the way.  IT’S BACK! DAN MORA, YOU SLY DOG!  Oh man, the same week that Batman ‘89 drops, we get double the oval.  That is right, cool kids Dan Mora has brought the yellow oval back to current continuity.  The appearance of the oval is no flashback like the last issue; this is the present, and those extra two wings never looked better!

Tamaki gets Batman, his motives, and what makes him tick, no question. It just feels like this arc is a few issues too long.  Eight issues and no conclusion are a bit much for a story that is not an enormous company event. Dan Mora is once again the headliner of this issue, and his art is utterly breathtaking and daring.  Mora’s art would make for one epic motion comic. This is an excellently written book, so don’t get me wrong, and you pair that with Mora’s art; I still consider this a must-buy on new DC Day. I am just ready for the Sara Worth case to close. – Peter Verra