SYNOPSIS: Step back into the Gotham of Tim Burton’s seminal classic Batman movies! Batman ’89 brings in screenwriter Sam Hamm (Batman, Batman Returns) and artist Joe Quinones (Dial H for Hero) to pull on a number of threads left dangling by the prolific director. Gotham becomes torn in two as citizens dressed as Batman and The Joker duke it out in the streets. As D.A. Harvey Dent tries to keep the city together, he targets the one problem tearing it apart: BATMAN! And he’ll get Bruce Wayne’s help in taking down The Dark Knight! 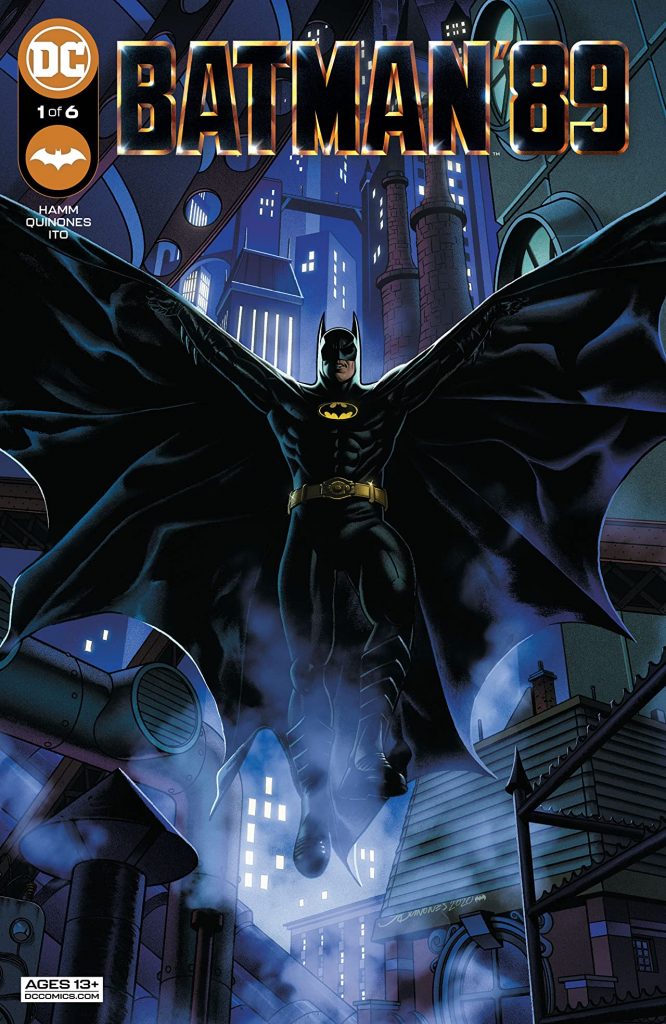 The Tim Burton Batverse is BACK!

Well, in the form of a comic book (and Michael Keaton’s return as Batman/Bruce Wayne in the upcoming film, THE FLASH, notwithstanding), at least.

Thanks to the fine folks at DC Comics, I was able to get an early look at this issue nearly a month ago.  Thus, I’ve had the opportunity to read through it a few times before writing this review.

The creative team of writer Sam Hamm and artist Joe Quinones — along with Leonardo Ito and Clayton Holmes — takes readers back to the world created by director Tim Burton in 1989’s BATMAN and 1992’s BATMAN RETURNS.  In terms of the timeframe for this comic book story, BATMAN ’89 apparently is set after the events of BATMAN RETURNS as we know Catwoman is still out there, somewhere, due to previously released promo artwork.  Bruce Wayne — who really doesn’t look all that much like Michael Keaton (probably a likeness rights issue) is still Batmanning in Gotham and Harvey Dent — who was not seen in BATMAN RETURNS — remains Gotham’s District Attorney.  Commissioner Gordon and Bruce Wayne’s loyal butler/partner Alfred Pennyworth return as well.

In addition, there are some new characters introduced here in B89 #1: Barbara Gordon and a kid that will obviously become Robin (since “The Boy Wonder” has also been previously teased in prom art).

Just read issue #1 of #Batman89 from @Joe_Quinones, @SamuelHamm, and the rest of the crew. If you love the world of BATMAN ’89 (the movie), you’re gonna be happy! And who the hell doesn’t love B89? Stay tuned to BOF’s reviews and podcasts discussing the whole series! pic.twitter.com/Xm6FFjLPTs

This interpretation of Barbara doesn’t seem to have anything in common with her comic book counterpart other than the fact that she’s Jim Gordon’s daughter.  In the B89 world, Babs is depicted as the estranged daughter of the city’s police commissioner who also works as a detective for the GCPD.  As far as Robin is concerned, we don’t know much about him — or his true identity — other than he prowls the streets of one of Gotham’s seedier neighborhoods as its kinda/sorta protector.

In terms of issue #1’s story, it’s basically the Havey Dent show.  We learn a bit about his backstory and where he grew up in Gotham, as well as his girlfriend — it ain’t Gilda!  Also, Harvey’s tired of “freakiness,” if you will, that has descended upon Gotham and is now targeting who he thinks is responsible: The Batman.

Speaking of which, if you’re expecting a lot of Batman in this issue, don’t — he’s in about half of it.  It’s not like The Dark Knight isn’t in it, but as I said, issue #1 focuses more on Harvey Dent while also planting the seeds to the story that will be told over the course of the next 5 issues.

As far as the artwork, Quinones and Ito do a nice job of capturing the vibe of Tim Burton’s films — though I personally got more of a BATMAN ’89 feel as opposed to its sequel.  It’d also say that it also captures the feel of the Batman comics of the 1980s as opposed to those of today.  Whether that was done deliberately, I have no idea.  It’s a nice touch regardless.

My only real gripe with the artwork is that Batman sports big ‘ol white eyes which, in my opinion, didn’t look all that great.  I would have much preferred if we could’ve seen his actual eyes as we did not only in the films but in the comic book adaptations of each.

All in all, other than the nostalgia aspect, BATMAN ’89 didn’t particularly blow me away.  But that’s OK as this first issue’s job, it seems, is to get the reader up to speed on where the Burton Batverse is and set up the story threads for the remaining issues.  Nonetheless, I look forward to seeing how this whole thing plays out. – Bill “Jett” Ramey