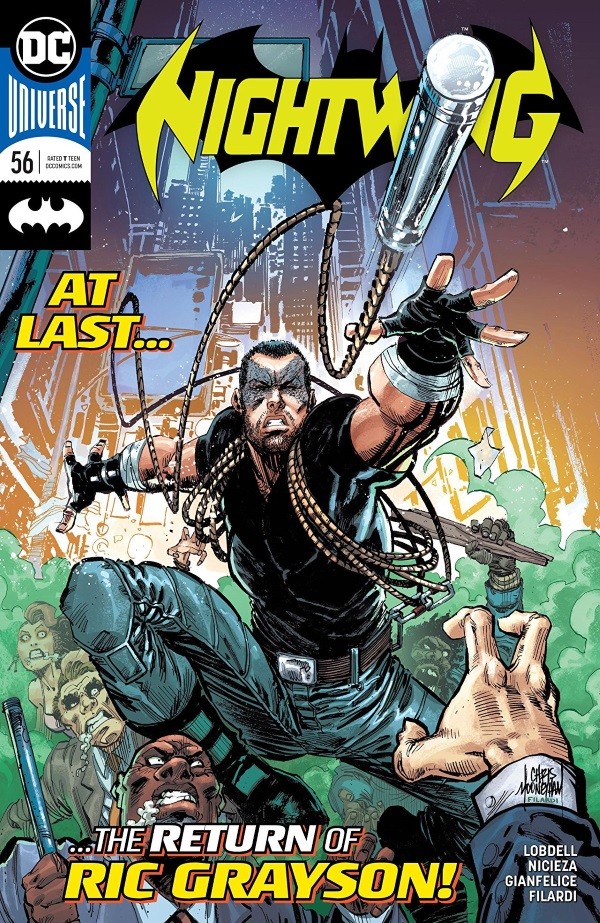 SYNOPSIS: The Nightwings have been picking up the slack Dick Grayson left behind, making a dent in petty crime and cleaning up the streets of Blüdhaven. But as Scarecrow’s plan comes to fruition, it looks like they may have bitten off more than they can chew…putting Grayson in a position he was not prepared for. One where he may be forced to become a hero once more…

The “Knight Terrors” storyline has come to a conclusion and it was OK.

The Scarecrow continues to unleash his fearless zombies on Bludhaven and only the new Nightwings stand in his way. Scarecrow also gives a moderately believable explanation for why it took him so long to strike in Bludhaven. Thank you!

It’s not much of a spoiler to say that Ric Grayson enters the fight against Scarecrow (after all, the cover says, “At last…the return of Ric Grayson!”).

I gave this comic more re-reads than normal to fully take it in. My first impression was that the way Grayson decides to return to heroics was rushed and a bit underwhelming.

Let me preface by saying that Scott Lobdel and company have done an outstanding job building up to Grayson’s return over the course of this storyline, seven issues total. They took time for his memory loss, bumming around and his general apathy to sink in. Likewise, we’ve seen acts of heroism slowly creep back into Grayson’s character.

That said, while Grayson’s decision to be heroic didn’t completely click with me it is backed up with some faithful internal monologuing. I may not dig the situation that influenced Grayson’s turning point but I agree with his thought process.

I’m also not completely sold on Grayson’s impromptu cure for fear gas. But it’s a comic book and I should really just relax and enjoy Grayson’s low tech, improvised Nightwing get-up. He literally assembled his look out of stuff taken from his car trunk. Extra points for ingenuity!

This last part is spoilery, so avert your eyes or hit the back button if you want to go into this comic clean.

It’s strongly implied that Grayson and the new Nightwings are going to team-up again in the future. I’m curious if this will end up being a full blown team a la the Teen Titans or a more casual team-up (like how Batman operates solo but has an extended Bat-family).

To be honest, I’m not so hot on the idea. I’m burned out on the team thing. One reason I stopped watching ARROW (and other DC shows on The CW) is that it became less about Green Arrow and more about Team Arrow. Not every hero needs to inspire others to take up their mantle and wear a similar-looking costume. Or any costume!

However, to avoid blatant hypocrisy, I should remind myself that I have previously complimented the Nightwing character on his adaptability (he’s been a sidekick, he’s been Batman, a Titan, a secret agent and continually changes locations). I also enjoyed the inclusion of the Run-offs, a group of recovering bad guys, in previous Nightwing stories and they more or less functioned as a team.

So time will tell. Like Sergeant Gordon said in BATMAN BEGINS, I’ve been wrong before. – James Armstrong

Jett Thumbs-through BATMAN: THE DEFINITIVE HISTORY OF THE DARK KNIGHT