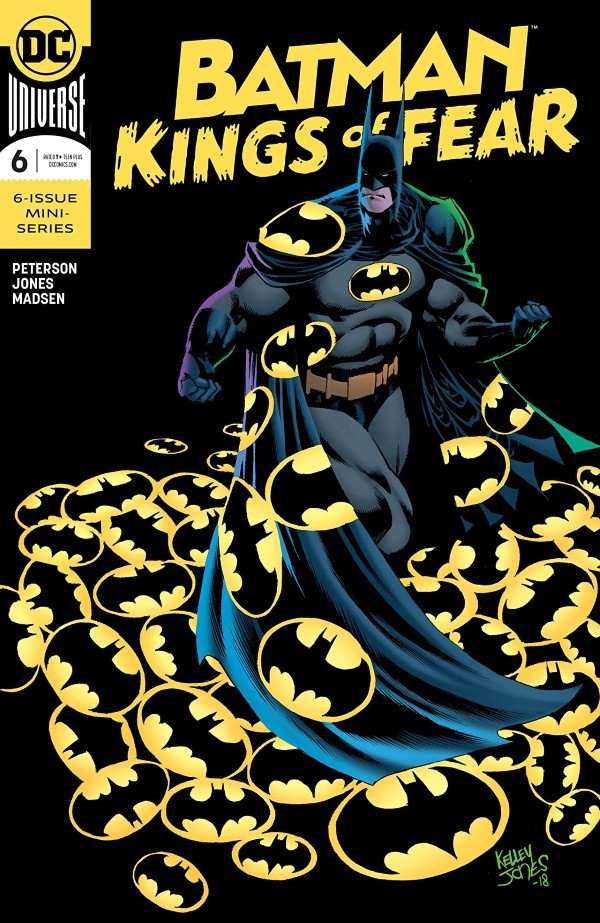 SYNOPSIS: The epic finale! Batman must battle Scarecrow and his own mind to save Gotham City. If he doesn’t, Scarecrow will turn Gotham and everything else Batman believes in into a nightmarish hellscape!

The end is here! Batman: Kings of Fear #6 concludes the mini-series spearheaded by Knightfall artist Scott Peterson and artist Kelley Jones. The series has been full of nostalgia, beautiful art, and almost every rogue in Batman’s gallery.

Issue #5 ended with Batman breaking through the fear gas-induced state he was in by injecting himself with a legendary amount of adrenaline, after coming to the subconscious conclusion that Gotham was worse because he existed. This was after the Scarecrow took him on a mental tour of what his rogues would have become had Batman never existed. Needless to say, the Master of Fear tries to convince our hero that the villains’ existence –and by extension, Gotham’s poor state — was his fault. While this has been a concept introduced to Batman by several of his rogues over the years, Peterson’s Batman has a level of vulnerability such that this revelation took a toll on him, and caused him to become angry and depressed that Scarecrow’s revelation might be true.

After thrashing The Scarecrow and locking him away, a discouraged Batman comes across an orderly at Arkham. The orderly tells Batman she was hoping she would eventually encounter him, as he had scared her husband straight and turned his life around years ago. While this gave Batman an obvious boost in morale, it wasn’t until he returned to the cave and confided in his trusted mentor and friend Alfred that he felt truly vindicated from the thoughts Scarecrow had introduced to him. Despite his outright disdain for Bruce’s mission (and his frustration at himself for supporting it), Alfred would not hear that Bruce hadn’t made Gotham a better place. The dialogue that takes place between Bruce and Alfred here was certainly some of Peterson’s finest writing in this series.

Overall, Kings of Fear was a fantastic story that was just the right length and hearkened back to the Batman myself and my fellow millennials grew up reading. My only complaint was that the story was a bit of a retread, but it was still done in a fresh way as to not feel stale. The standout of this series to me was Kelley Jones. We haven’t seen Batman or Gotham drawn this way in some time, and Jones just knocks it out of the park. He gets bonus points for all of BTAS imagery and references. See if you can spot them all! Pick up the collected edition of this book when it’s released. I promise you won’t regret it. – Mance Fine

A BOF Giveaway | WHY DO WE FALL? EXAMING THE DARK...