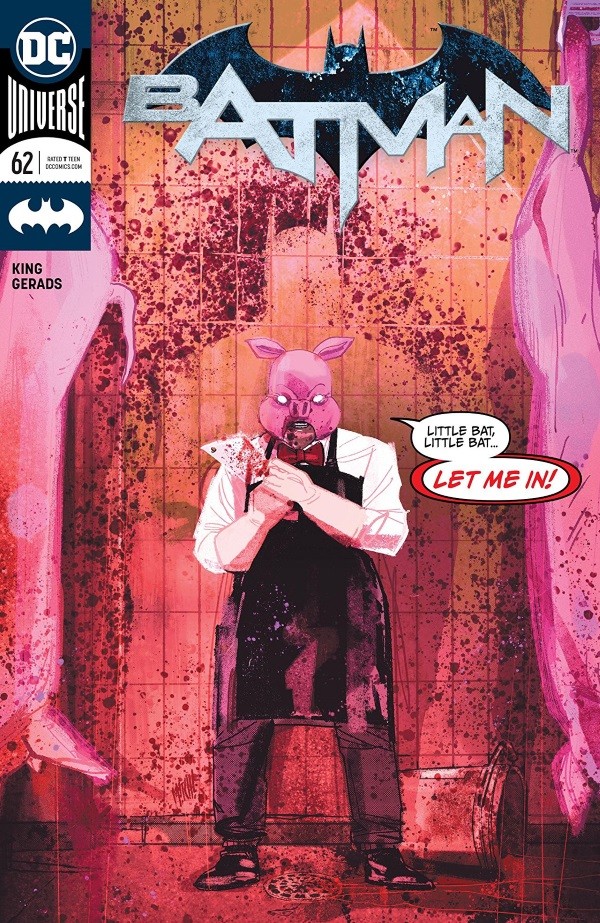 SYNOPSIS: The Eisner-winning creative team behind MISTER MIRACLE is back together as artist Mitch Gerads rejoins the Bat team for a special issue! Professor Pyg is loose in Gotham, and you know that means things are going to get weird…and bloody!

BATMAN #62 arrives today from writer Tom King and artist Mitch Gerads, the creative team that recently delivered a brain-busting, heart-rending ending to their 12-issue MISTER MIRACLE series for DC. It’s fitting, then, that when they turn their combined attention to Batman, the theme is yet again about escape. The details, however, are a little murkier. Literally.

“Open your eyes. OPEN YOUR DAMN EYES!” Batman says this to himself, just as King and Gerads are telling us (via letterer Clayton Cowles), too. Through blood-smothered vision, he sees he’s hanging upside down. Is it his blood? Probably a little of it. The rest belongs to slaughtered swine in a warehouse currently presided over by a preening, knife-wielding Professor Pyg, who clearly intends to chop our hero into chitlins.

Gerads and King conduct a bloody symphony of body horror as Batman talks himself through survival. How to manage the blood flowing into his mouth and gathering thickly in his throat. How to enter his muscles into a conversation with the rope that binds him. How to self-inflict even more damage to his skin and bone immediately to suffer less ultimately by freeing himself more quickly. It’s savage, primal, visceral stuff, spat across the page in fascinatingly grisly detail.

He thinks of her.

But where is here? Or what is here? What terrible truths slop around among the blood and the guts and all the little details that just…don’t…add…up?

I’ve said it before. I’ll say it again. Reviewing Tom King’s BATMAN run is the most difficult gig I’ve had in my 26 years as a published reviewer because I’m running out of new ways to say how incredible and original this man’s work is. This issue will churn your stomach and punch your soul. (It also made me hungry for bacon and pulled pork, but your mileage may vary.) Gerads’ art is horrific, energetic, and evocative; I love how Batman appears nearly brown against yellows, oranges, reds, and sickly splashes of green that give everything a digital sheen I suspect is quite deliberate. It feels as vaguely unreal as much of MISTER MIRACLE did, without compromising an iota of immediacy.

Here’s another thing I say almost every two weeks, and still mean every word of: BATMAN #62 is one of this title’s best issues yet, and I can’t wait to see what’s next. – John Bierly