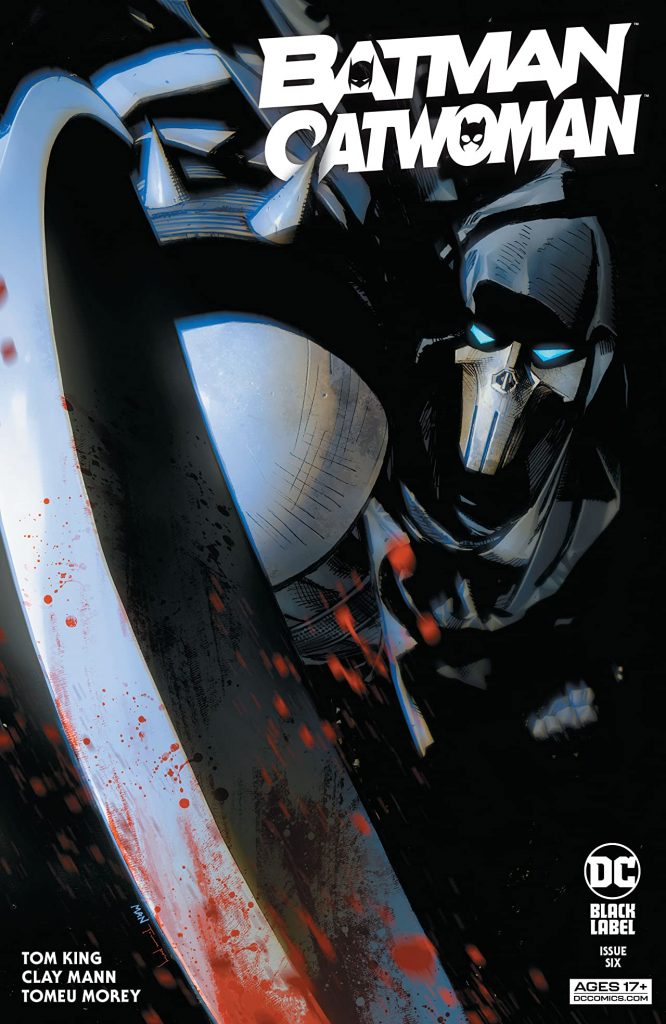 SYNOPSIS: As mysteries deepen, so do resentments. Throughout her life, Catwoman’s actions have caused many close to her to doubt her motivations. Bruce Wayne, Phantasm, and now her daughter have all had their suspicions about her deals with The Joker. And when she killed the old clown, did it trigger this feline’s ninth life? Or maybe it was really over all those years ago, the first time Phantasm drew her blood and Batman had to face a harsh truth. There are big revelations waiting to be found here at the halfway point in Tom King and Clay Mann’s final word on the Bat/Cat romance!

This long-awaited issue starts with an assault. Not literally, it doesn’t start with a fistfight or anything, but in the reader’s eyes. Every issue has quietly opened with a two-page spread showcasing Wayne Manor, with each window revealing the chapter and the holiday song the issue’s theme is based around. This time, however, a purple haze has fallen over the once stately manor and it’s been desecrated by laughing graffiti. The Joker’s malevolence has its dirty fingerprints all over this issue, even in scenes he’s not in, infecting its very heart.

Once we get past the opening credits and window box we actually find Selina nursing a hangover at home and listening to “Joy to The World”…as the Clown Prince of Crime watches her with disdain from across the couch. As they converse and Selina gives him a small peak of what Batman, what Bruce, is actually like in private, I felt a small sting of betrayal as the reader. Selina has moments of intimacy with two men who are diametrically opposed to each other and while she gives away the Joker’s plans to Batman, it doesn’t seem disloyal. The Joker wants and expects her to aid the Dark Knight. It’s all part of the game. The Joker, on the other hand, rummaging through Bruce’s extra clothes and then wearing them as Selina reveals her past, feels like a violation of her relationship with Bruce. Having said that, could she even open up to Bruce about what she’s sharing with Joker at this point in their relationship?

Meanwhile, in the present, we see another form of betrayal from Selina as she plays along on Phantasm’s side to lure Batman into a trap. After months of waiting, we finally see Batman face off against The Phantasm, and it’s as much a fight of principles as it is a physical struggle.

Phantasm strikes at Batman’s ideologies and she makes some valid points. I can understand her frustration with Bruce as he clings to ideals that have personally resulted in tragedy for her. King does a fine job having Batman explain his stance on why he has a code against killing, emphasizing his lack of limitations in his battle for Gotham’s soul. While Andrea accuses Bruce of being childish in his worldviews, he counters with the wisdom of learning from his mistakes. I enjoyed hearing Batman acknowledge his failures and how those inspire him to push to be better. It was a rare light of hope in an issue filled with personal turmoil.

Back in the future, Selina’s actions are catching up with her as Helena point-blank accuses her of killing The Joker. Mann again returns to the dynamic from issue #3 of the cat chasing its prey in the gutters of the art, framing the mother/daughter interaction.  What follows next is a fun romp as The Bat and Catsuit up to roam the streets of Gotham again.

Despite the impracticalities of someone Selina’s age-fighting crime in a leotard with exposed legs (after all, this is an era where almost everyone covers up completely in thick leather and body armor), I like Mann’s design. It harkens back to a Golden and Silver Age look for Catwoman and she is clearly having fun embracing the nightlife alongside her daughter. King seems to be having fun, too, conjuring up wacky villains for the Gotham of the future.

Characterization is again a selling point of this series. A highlight is Catwoman and Batwoman visiting Commissioner Grayson. Everyone is still dealing with the loss of Bruce and it was touching to hear Selina tell Dick that his kindness and optimism were things Bruce considered to be his greatest triumph. It touches on the idea that Batman goes out, night after night, so people won’t have to suffer the same fate that he did as a child. Dick is the personification of that goal. It’s no small gift that Selina gives Dick here-how much he, in turn, guided his mentor, his big brother, his father.

I continue to find Mann’s art stunning. Selina is gorgeous, Dick is dashing, and Phantasm and Joker are horrific. Mann shows off his range, featuring a playful Joker in his look from the Batman: The Animated Series episode, “Christmas with The Joker” and juxtaposes it with a frightening Joker peering out from the darkness of a Christmas tree. I also enjoy the blue glow Morey adds to the lens of Phantasm and Batman, in addition to the Bat-Signal of the future. Something feels slightly off about the hue of Selina’s Christmas tree, alluding to it being tainted by the Clown Prince helping decorate it. It doesn’t promote the warmth of the holiday but lends to the tree feeling artificial and hollow.

It’s no secret now that this title has been plagued with delays and Liam Sharp will soon be pitching in on art chores. Despite the wait for this issue, I found it well worth it. I was immediately sucked back into the world and enraptured by the story and art. As we finally reach the halfway point we get the much anticipated Batman/Phantasm throw down, coupled with complicated character dynamics. I’m eagerly looking forward to seeing where Selina and Helena go in their relationship, as well as seeing how Bruce and Selina overcome the obstacles they are facing in both their past and present. Despite shipping schedules, this continues to be a top-tier Bat book! – Javier E. Trujillo 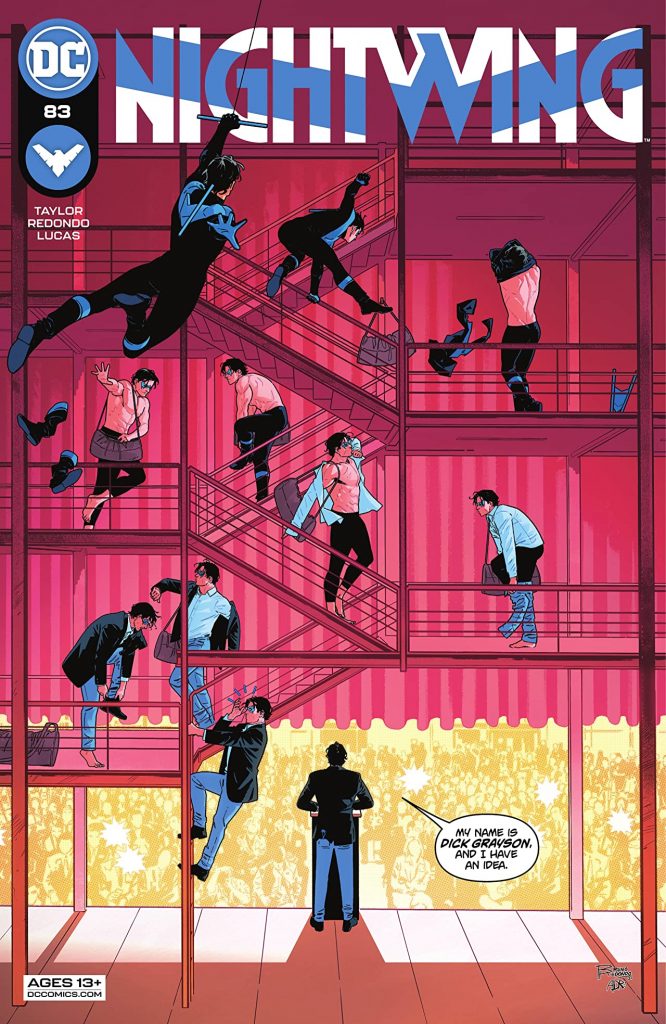 SYNOPSIS: It’s a fight for the soul of the city! Now that Dick Grayson has inherited more money than he could possibly need, he has an idea on how he can help the city with it-and it’s time for him to announce it to the world! But with Blüdhaven’s so beyond saving, what idea does he have that could possibly save it? Meanwhile, an unexpected figure comes into play with a plan to buy the city (and all the power that goes with it) from Blockbuster. Things are about to get messy for new public figure Dick Grayson, but maybe he can enlist some help from his “friend” Nightwing!

NIGHTWING #83, at last, unveils the big idea Dick Grayson has for his newfound fortune.

It’s a lot heftier than throwing a big pizza party!

If you follow the news more than the average American the big idea won’t come across as too revolutionary. So you could call it a tad over-hyped but nevertheless a decision fitting for who Richard John Grayson is as a person.

It’s also reassuring that DC would run a story that is kinda political or at least talked about in political circles.

Back when “The Bleeding Edge” storyline was happening I couldn’t help but think it ended early because a cyberpunk tale of hacking and weaponizing fake news was a tad too on the nose. That may be the publisher got cold feet. Looking back it’s more likely the mind-breaking events of NIGHTWING #50 were set in stone and that “The Bleeding Edge” simply had to come to a close.

So this issue helped put me at ease that Nightwing writers, or any other comic book writers, could have these characters say a little something if so desired.

While this issue does have one pretty cool fight scene much of it is just dialogue as Grayson runs his big idea by friends and family. So expect a lot of great cameos, including one I’ve wanted to see again since the early days of Rebirth.

One minor gripe, which I don’t think I’ve had to mention since Dick got his memory back, this issue has him saying, “My name is Dick Grayson” on the beautiful Bruno Redondo cover. That line still bugs me, still sounds like a CW show staple.

RUMOR: Warner Bros. Developing/Working On an Animated THE LONG HALLOWEEN

Should JOKER Get a Sequel?