SYNOPSIS: Ah, you hear that beautiful racket? That’s the music of Gotham City-the largest city in the world, the big gargoyle, the treasure of the night-anyone who calls it a crime-infested hellhole is dead wrong. No way hell has such great pierogies. So join us here (hear?) as we bring you the stories behind the hit HBO Max scripted original podcast with this sensational prequel one-shot, written by the very creators and talent who lent their voices to the show. And unless you’ve been living in a cave, you know that after years of rumors we find out not only is the Batman real, not only is he one of the good guys, but also turns out, he’s gonna be a cop! With special appearances by King Scimitar, Stoveplate Sullivan, Billy Wristwatch, and others directly from the podcast, this oversize special brings you deeper into the mysteries behind Batman: The Audio Adventures! 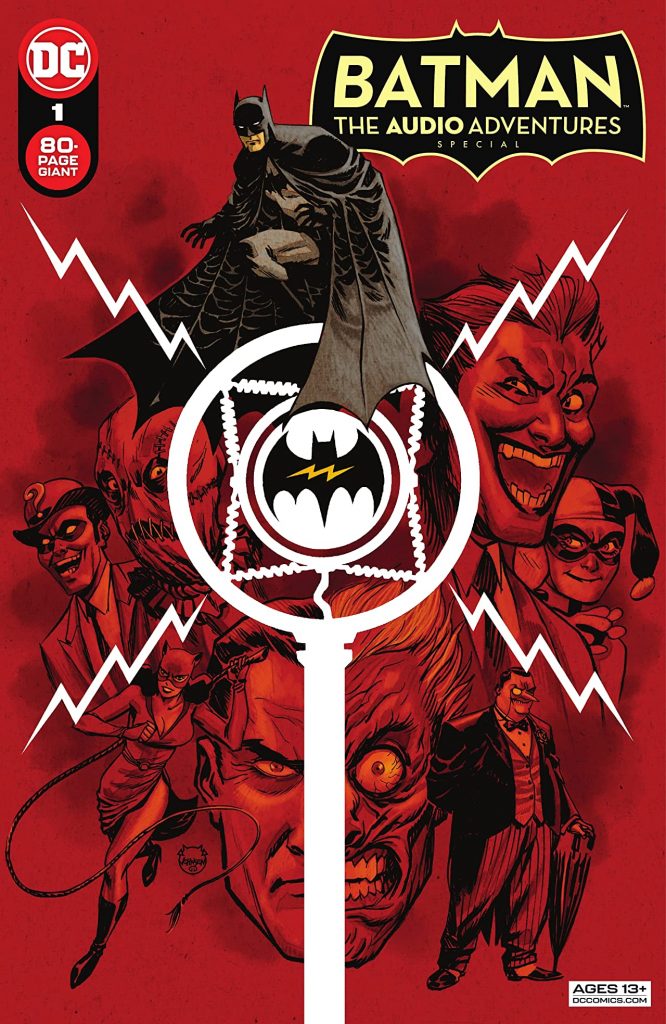 Batman: The Audio Adventures has blasted on the scene.  Ten episodes are on HBOmax, two episodes are up on your favorite podcast platform, and now we have our first in-continuity comic book. This extra-sized comic book hits all the podcast’s beats, but is it worth your $10?

Batman: The Audio Adventures Special is a nine-story anthology book. They are keeping with the show’s tone, and Jack Ryder does the job of the narrator and the PSAs as he weaves a bit of humor in between our various stops around Gotham City.   Most of the book is written by Dennis McNicholas, and there are two stories about Penguin and Two-Face written by the voice actors Bobby Moynihan and Ike Barinholtz, respectively.

Out of the nine stories in this book, I have to say I only really enjoyed four of them, “A. Better Mousetrap,” “King Scimitar: Who He Is and How He Is Come To Being Now,” “The First One’s Free,” and “Two Split Second on Division Street.”  Hard to justify spending $10 for a book half filled with storied I don’t like.

“A Better Mousetrap” was a fun Batman adventure taking down a new gang throughout the city.  “King Scimitar: Who He Is and How He Is Come To Being Now,” “The First Ones Free” is, in my opinion, the best tale in the book and puts some context on this character since his introduction in the first podcast episode.  It goes deeper than all the other stories in the book.  The book itself is very much a lighthearted good time.  But this tale has some weight to it. I would love for the term “A Robin problem” to go mainstream as well.  “The First Ones Free” is a beautiful Dick Grayson tale.  A story about our young Robin using the resources and elements around him to solve a crime that might give the Dark Knight issues.  It was all about being in the right place at the right time, and Grayson was. “Two Split Second on Division Street” is the second-best tale in this book.  It is the only story here that will rival King Scimitar in terms of weight.  A great look at Two-Face and an incredible dive into his psyche.  I must give Barinholtz credit here; I enjoy his writing much more than his voice work.  This is one of the better Two-Face stories ever written.  The book might be worth buying for that alone if you a huge fan of Harvey Dent.

Various artists illustrate the book.  Each artist brings their flair to the book. At times you get some Darwyn Cooke, Batman: The Animated Series, Batman: The Brave and the Bold, Batman, and Scooby-Doo Mysteries; there is a wide range here.  It all does blend well with what I have envisioned in my head while listening to the podcast.  As you listen to the podcast, you get that Brave and the Bold feel, and the artists perfectly reflect that with every page.

DC has been publishing tons of anthology books lately, and all have been cheaper than this one.  Future State Gotham and Batman Urban Legends are the first that come to mind.  If you have been reading these anthology stories, you have realized that you might not get the bang for your buck with every issue.  While I did find some stories in this that I did enjoy, I can’t push a $10 unless it moves me.  Unless you are a “completest” Dick Grayson or Harvey Dent fan or someone who loved all ten episodes released so far, I think you can pass on this one. –  Peter Verra James Gunn: THE SUICIDE SQUAD “Is What It Is”