Announced in March of 2018 during SXSW, Mondo revealed their upcoming line of collectibles in 1:6 scale from Batman: The Animated Series!

First out the gate was obviously the Caped Crusader himself. Mondo followed up his success with Mr. Freeze before releasing a black-caped variant of Batman, with alternate Bruce Wayne head sculpt.

Now, the cat is out of the bag, and Catwoman is next in line for the Mondo treatment!

Utilizing Phantom City Creative’s art from their “The Cat & The Claw” episode poster, Catwoman comes packaged in an elegant looking box, highlighting Selina Kyle and her prize. Unlike the Dark Knight, whose deluxe version contained an alternate cape (amongst other things) and required a second box, Catwoman and all her accouterments fit snugly inside one package.

The deluxe version of Catwoman includes:

Minimalist in design thanks to its animated origins, Mondo easily captures Selina Kyle in one-sixth scale form! I was impressed by the cowled heads, featuring sculpted eyes that add depth to the design. I love the option of the unmasked Selina, but her sculpted hair limits the range her head can turn. Not so much an issue to me, but an observation.

Catwoman’s belt is also sculpted, as opposed to being a paint app, with my version having a bit of a pucker on one of the rear circles. It’s not worth complaining about as I was able to easily flatten it into place.

Once again, Mondo goes for a cell-shaded look in this line. They pull it off fairly well, with different grays that add highlights and don’t distract from the form. I feel the look is far more successful with this figure than it was for Mr. Freeze. She pairs very well with the first edition Batman, who has blue highlights on the black of his cape. The greys of both their costumes play off each other excellently.

Her accessories are a nice addition, but my favorite has to be Isis. Unlike the smaller DC Collectibles version, this Isis has no articulation, but because of that, it also has no problems standing! Well, the one not designed to drape across Catwoman’s shoulders! The uncoiled whip doesn’t sit perfectly in the hand-designed for gripping, but it also doesn’t fall out easily.

For me, the only drawback is the interchangeable hands. There were several times when I was swapping them out that the ball joint would separate in two instead of coming out cleanly. At first, I assumed it was from the heat of being on a truck all day, but the issue remained across all the hand options days later after everything had a chance to cool. For the price point, I’d hope it would hold together a little bit better. Still, it’s easily remedied and so far the pieces snap back together easily.

Featuring approximately 30 points of articulation, Catwoman can pull off some decent poses. Ankle joints gave me some problems on occasion, but since she isn’t as top-heavy as the Batman figure, it was easy enough to adjust the joint so she didn’t fall over. Still, you’ll most likely want to use the base she comes with to minimize any falls while displayed. Utilizing a classic bat emblem, all figures across the line have the same base, adding to the sense of uniformity.

Outside of Batman, Catwoman was my most anticipated figure from Mondo. Overall, I’m very happy with their efforts and would recommend it to anyone who’s a fan of the character, the show, or 1:6 scale figures. The Mondo exclusive version is currently available from their site for $165. Mondo products tend to get snapped up quickly and their other B:TAS figures have already sold out, so act fast!

Fingers crossed they immortalize The Joker next! – Javier Trujillo 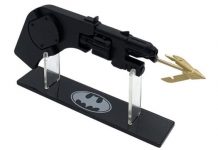 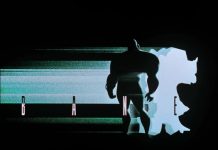