SYNOPSIS: Batman and Miracle Molly are all that stands between Gotham City and absolute insanity! But an unhinged Simon Saint brings all the resources of the Magistrate to bear on the Dark Knight…is victory at hand for the Scarecrow? 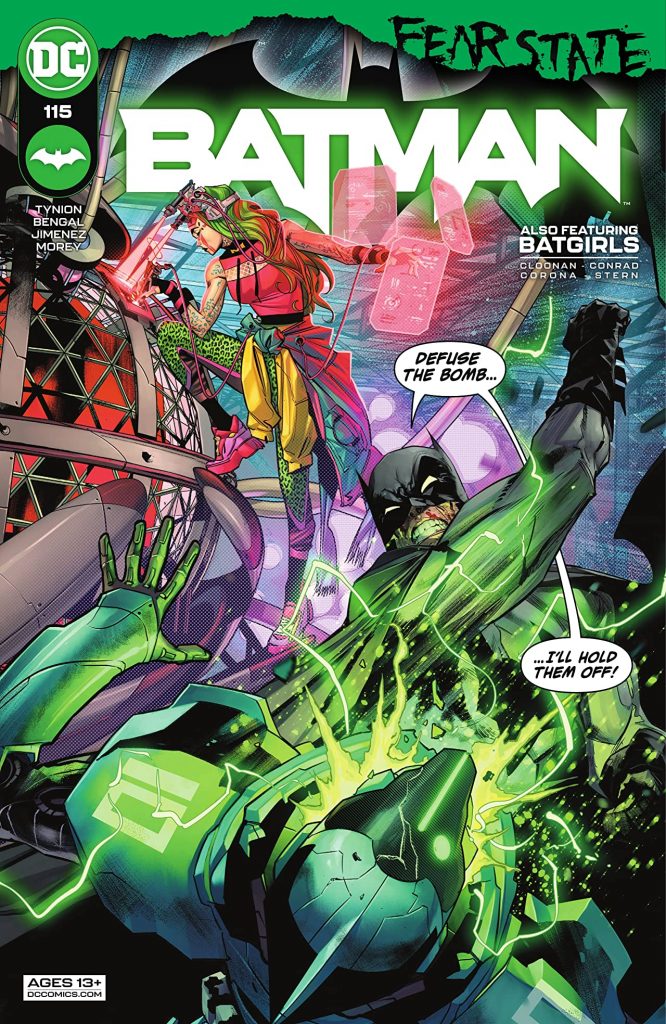 The latest entry into James Tynion IV’s FEAR STATE event is out this week, and quite simply, it’s a mess, folks.

Batman shows up halfway through the story, escorted by Miracle Molly to reveal some new mind machine that Scarecrow is apparently going to use on the city. Meanwhile, Simon Saint has lost his marbles and is angrily in hot pursuit of Peacekeeper-01. And speaking of him, Scarecrow is about to toy with his mind. All of this, while Poison Ivy is getting angry underground.

I wrapped up my last review with the golden rule “If you don’t have anything nice to say, then don’t say anything at all”. I’d like to stick to that, but how good of a review would this be?

So I’m going to try.

The story points in this issue barely move FEAR STATE along, yet again seeming like adding more to the plot rather than building up to something. Batman shares equal billing with everyone else (a common problem I find in Tynion’s run), which continues to feel odd for a BATMAN title. This book has also been sold as a Scarecrow story, but I’d argue it’s Simon Saint’s, who I have no interest in.

Jorge Jimenez has been the main artist for this book recently, but splits duties here with Jorge Corona. Jumping back and forth between the two is a little jarring, as Corona’s doesn’t feel as detailed or in line with the groundwork Jimenez has planted. It’s an unfortunate swing and a miss.

I feel like my review is scattered, which is a good representation of the BATMAN title’s current state. It’s hopping all over the place, mixing in too many characters, and doesn’t have a clear narrative. I don’t really know what it’s about anymore. Jorge Jimenez has usually been the lone highlight, but even he is only able to provide a fraction of the number of pages.

FEAR STATE is simply not good. I envy those of you who have enjoyed it, but it’s not doing anything for me. – Bill “Jett” Ramey