SYNOPSIS: Ten years ago, the massacre known as Fools’ Night claimed the lives of Batman, The Joker, Nightwing, and Commissioner Gordon…and sent Selina Kyle, the Catwoman, to prison. A decade later, Gotham has grown up-it’s put away costumed heroism and villainy as childish things. The new Gotham is cleaner, safer…and a lot less free, under the watchful eye of Mayor Harvey Dent and his Batcops. It’s into this new city that Selina Kyle returns, a changed woman…with her mind on that one last big score: the secrets hidden inside the Batcave! She doesn’t need the money-she just needs to know…who is “Orpheus”? Visionary creator Cliff Chiang (Wonder Woman, Paper Girls) writes, draws, colors, and letters the story of a world without Batman, where one woman’s wounds threaten to tear apart an entire city! It’s an unmissable artistic statement that will change the way you see Gotham’s heroes and villains forever! 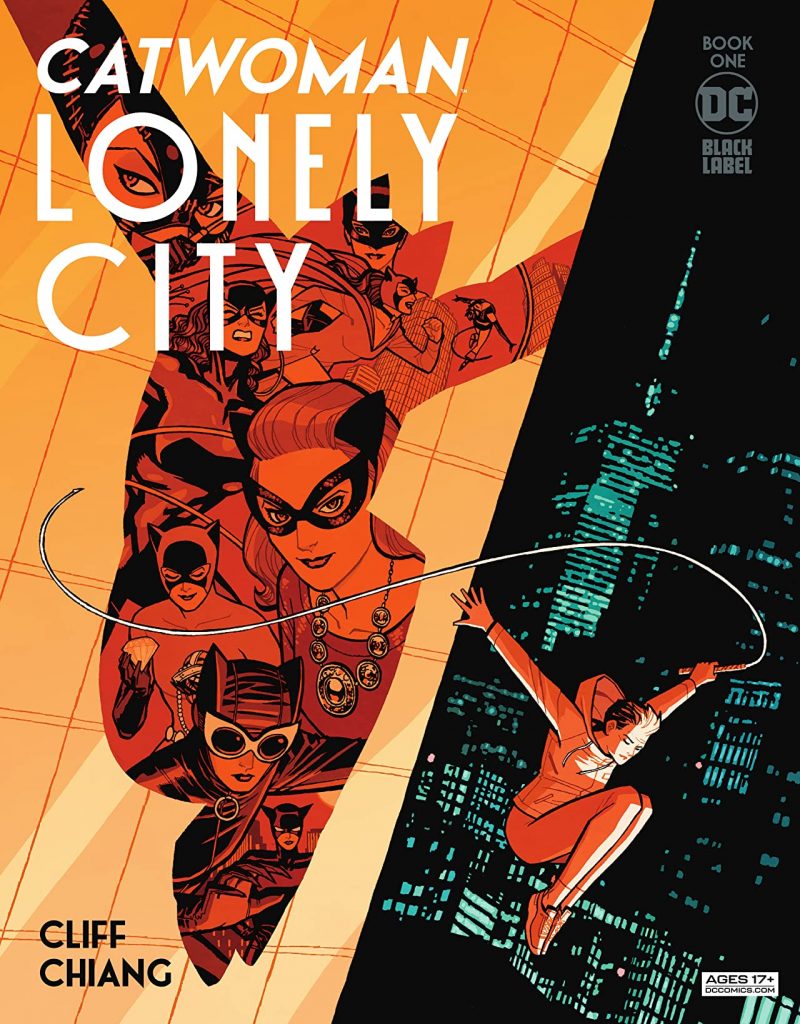 Cliff Chiang turns his singular vision to Gotham’s Feline Fatale and the results are purrfect!

Catwoman: Lonely City starts with a strong setup, feeling inspired by heist movies, The Dark Knight Returns, and the work of Darwyn Cooke.

Much like the Frank Miller classic, the lead has been disillusioned by a personal tragedy, finding themselves in a world they no longer recognize, with Two-Face seemingly reformed and a body no longer as capable of the physical feats it could easily manage in its prime.

Unlike that seminal story, Gotham is not as bleak at first glance. In fact, it seems to be prospering. However, underneath that veneer of peace, a type of fascism is creeping in. Batcops, a heavily armored and disguised tactical unit of the GCPD, roam the clean streets, using facial recognition technology and scanning for something called a “G-Band”, a device that will be mandatory for all Gothamities in the coming year. Cash is also rarely accepted, with “G-Money” taking its place.

With only her old penthouse and its contents intact, Selina has to forge a path through this brave, new, Batmanless world. Going to Penguin (now “Emperor” Penguin) results in burning bridges and Barbara Gordon isn’t happy to see her either. Chiang, through Barbara, lightly touches on everyone’s favorite Twitter hot take — “Why doesn’t Batman use his money to help people instead of dress up and fight crime?” Barbara, who is running to oppose Two-Face as mayor,  helps propel Selena on her path towards something called “Orpheus”.

Chiang really kicks the plot into gear when Selena visits Ma Hunkel, the former Red Tornado, at her bar. There she finds an older, out-of-shape (these damn hips!) and slightly punchy and inebriated Killer Croc. No longer one of Gotham’s top mob bosses, he’s bouncing at clubs and trying in vain to hold on to the respect he once commanded. There’s something endearing about the way Chiang presents him. Maybe it’s the cap and sandals or the humanity he portrays through Chiang’s art, but he’s not the vicious Killer we’ve seen before. If anything, he serves as comedic relief in this story, bringing a sense of fun along with his exuberance at being back in the game.

Mayor Two-Face proves to be just that as he arrives at the bar, needling Selena for missing her parole check-in, but really it’s a ploy to manipulate her for his own ends. This encounter sets her resolve to break into the Batcave!

I love this whole set-up! Not only is it the story of a person trying to prove their relevance in a world they feel is passing them by, but there’s a mystery to it all as well! What is the Orpheus that the dying Batman wanted? As far as MacGuffins go, this feels like it carries some weight, knowing it could save the city in its hour of greatest need.

Chiang plays with the timeline to a moderate degree, shifting around events to provide the most dramatic effect. It’s nowhere near as complicated as the other Black Label book, Batman/Catwoman, but makes for an interesting parallel between the two titles and heightens the impact of seeing a climactic moment from the story’s catalyst, Fool’s Night. After hearing how Selena killed The Batman ten years ago, we actually get to see what happened and decide for ourselves how much blame Selena should carry.

Chiang, whose art propelled Wonder Woman into one of the best titles of The New 52 line, continues his tradition of excellence within these pages. His storytelling and use of perspective are precise, drawing the reader’s eye along to where the focus needs to be. He also utilizes several of Selina’s costumes, which not only assist with what time period we’re in, but serve as a fun tribute to her history.

The coloring reinforces the story’s tone-vibrant and warm when it needs to be, selling the idea that Gotham is more idyllic than it was before Fool’s Night. Blood red skies are a thing of the past as pink and purple hues adorn Catwoman’s evasion of the Batcops. Iceberg Island is an opulent oasis, reflecting the Emperor Penguin’s new status, and The Stock Pot is clean and inviting, no doubt due to Ma Hunkel’s rules. This Gotham feels very well thought out and has lots of character thanks to the choices in art and coloring. Outside of Gotham Heights, which is dilapidated and abandoned, Gotham is seemingly thriving, but I know Chiang has other ideas in store for us next time.

There’s a lot of reflection in this opening chapter as Selena wanders the streets of Gotham. We see her isolation as she regroups in her penthouse and her sorrow as she visits the graves at Wayne Manor. The toll of the last decade on her isn’t just in her knees, but in her spirit as well. Chiang gives us plenty of insight into a Selena Kyle that genuinely cares for the

Catwoman: Lonely City is an instant classic in the making! Don’t be surprised to see it standing alongside some of the greats in the years to come. It presents a bold future for Selena Kyle that balances heartbreak with a sense of fun, giving us a deeper glimpse at a character who is not only looking for redemption but to prove to the world and herself that she’s still got it. Chiang really poured his soul into this and it shows in every panel! Don’t miss this book! – Javier E. Trujillo