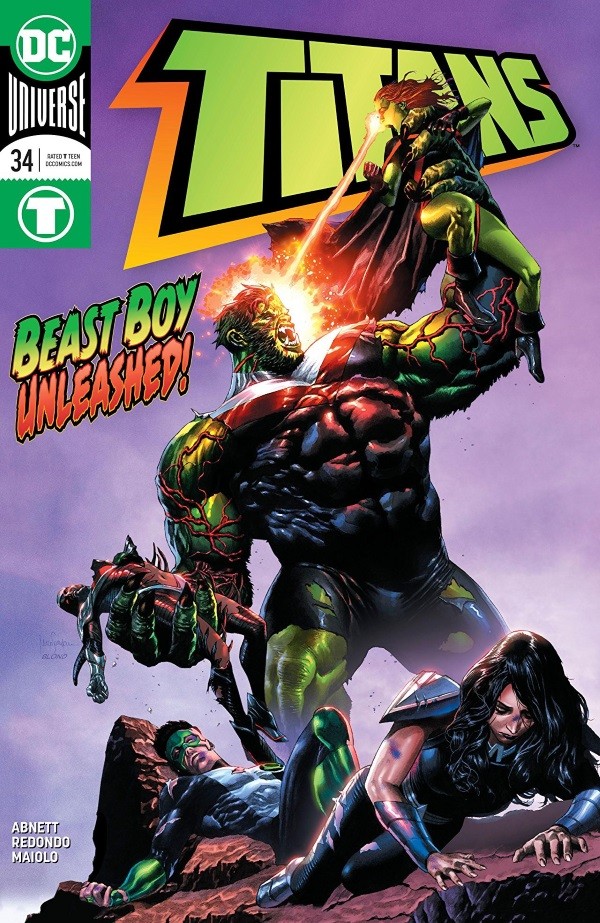 SYNOPSIS: “INTO THE BLEED” part two! The Titans are trapped on the perilous Unearth, far from home and standing in the face of not one but two evil armies. But hey, no sweat, right? Then, things take a turn for the worse when the commander of the opposition turns out to be one of their own, and the Titans will need to make some hard choices on the path to victory. Plus, what is Mother Blood’s connection to the Totality?

Part two of “Into the Bleed,” the culminating story of the current Titans arc, delivers answers to just how everything ended up here. The Titans have traveled to Unearth in order to stop the Blood Cult and rescue Raven’s soul self, unfortunately, just as Mother Blood planned. Falling into the trap, Green Lantern and Steel are captured, and there are not one but two versions of Raven.

This is an exposition-heavy issue. It primarily takes place between Mother Blood holding Lantern and Steel hostage, and the remaining Titans fighting off Unearth’s forces. Once again, Mother Blood monologues to tie all the loose ends together.  Jumping between Mother Blood, the Titans, with a smattering of “Maker” Ernest Hinton, the issue maintain a good pace. It never gets bogged down as just a plot dump.

In all of the explanations, the book gets to the bottom of the three different Ravens. The lost of Raven’s soul-self has been one of the most intriguing aspects of Titans (it has been ongoing almost since the beginning of this run) and the last issue threw in more intrigue with the introduction of a third Raven. This one is a commander for Prince Travesty and his Unearth army. After the reveals in the last few issues, the mystery of Raven could have to fall on its face like the others, but this reveal feels contrived or lazy. While the “soul for a soul” device may be a bit cliché, it works when done right, and they got it right here.

Hopefully, this issue isn’t a farewell to Hinton. He hasn’t been around much in these books, but he brings something different in all his appearances. His god-like status and powers on Unearth were a surprise, he is purposely played as a regular old man in his last appearance. That is why his burst of power is so unexpected, and then it looks like a way to turn the tide for the Titans. In the end, his purpose to was to further legitimize Travesty’s threat. Hopefully, that will be well served as this arc ends in a few issues, and not just a throwaway death.

The progression of this arc seems to be going in the right direction. There are some dodgy parts (what were Lantern and Steel doing in the Bleed, and, as always, the new Beast Boy design is awful), but getting a clearer idea of what the story is going for far outweighs the missteps. Hopefully, the next issue will continue building a great end to the arc. – E. Chad Metz