SYNOPSIS: The battle against Blight rages on! Batwoman will need Batman’s help to take down his greatest foe and the man who killed his father. But with Batwoman’s identity revealed, it’s sending shock waves through Neo-Gotham. Everyone will have to get on board with her-or face Blight’s nuclear destruction. 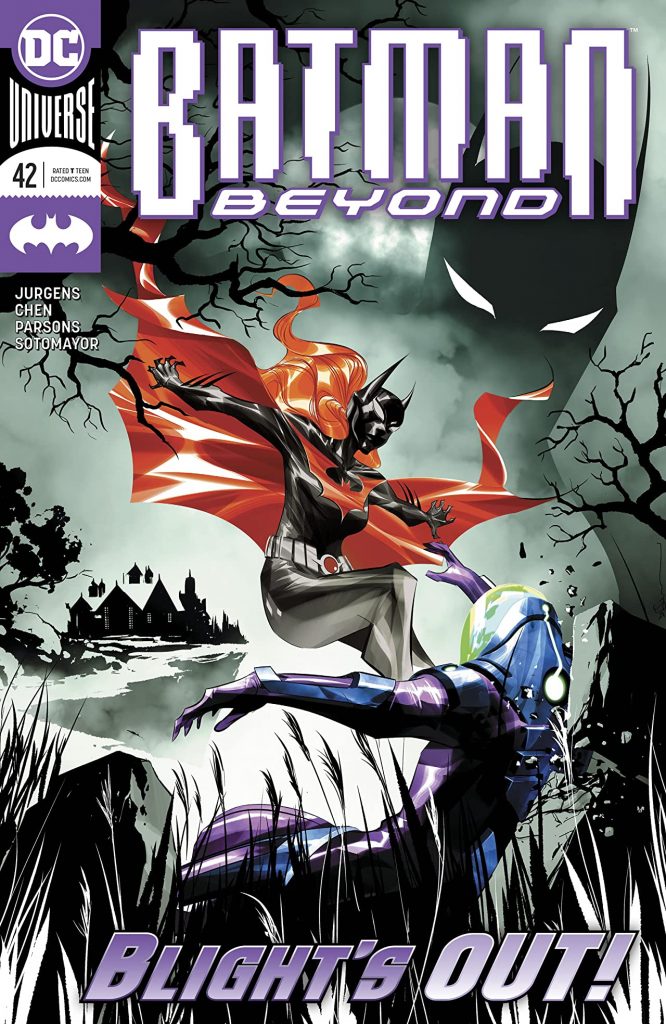 We’ve reached the end of the “First Flight” arc. I haven’t been much of a fan of this story, but I’ll admit that this was a better than average ending.

We begin with some exposition, but unlike recent issues, this is much needed and fairly well done. Dan Jurgens finally uses the rationale that we’re all used to and we’ve all accepted as fact, Gotham needs a protector. That’s why Elainna decided to steal the suit and take up the mantle in Terry’s absence instead of her masquerading as Batwoman just on a whim.

Blight is written very well. Powers’ animosity toward Bruce is palpable, an area that Jurgens has been kind of hit or miss on in the past. Blight is an absolute badass and is without a doubt, one of the top villains in the series. The one thing that suffers is that his motivation is a little weak, but the way he’s written in this last issue of the arc makes up for it. What sets the end of this arc apart from every other arc in Jurgens’ run is that he forces Bruce to take the backseat and lets Terry and Elainna shine. This is a problem that I’ve harped on for a while and I’m hoping that Jurgens realizes that Bruce doesn’t have to always be the one to defeat the villain.

The Sean’s (Chen and Parsons) kill it in the artwork department again. I really can’t sing their praises enough. Everything they’ve done in this arc is clean, consistent, and really just a pleasure to look at.

All in all, I was impressed with this issue, especially after lackluster showings throughout this arc. It’s not perfect, but it’s an extremely solid issue that serves as a great conclusion. –  Matt Whaley

SYNOPSIS: As Gotham City’s renovations begin, mysterious metal statues begin appearing all over town, which leads Batgirl to believe they may be more than meets the eye. What’s even creepier is whatever is terrorizing Alejo’s constituents. Jason Bard doesn’t want to admit it, but his body doesn’t feel quite right after leaving Unearth. Did something follow him out of the portal? 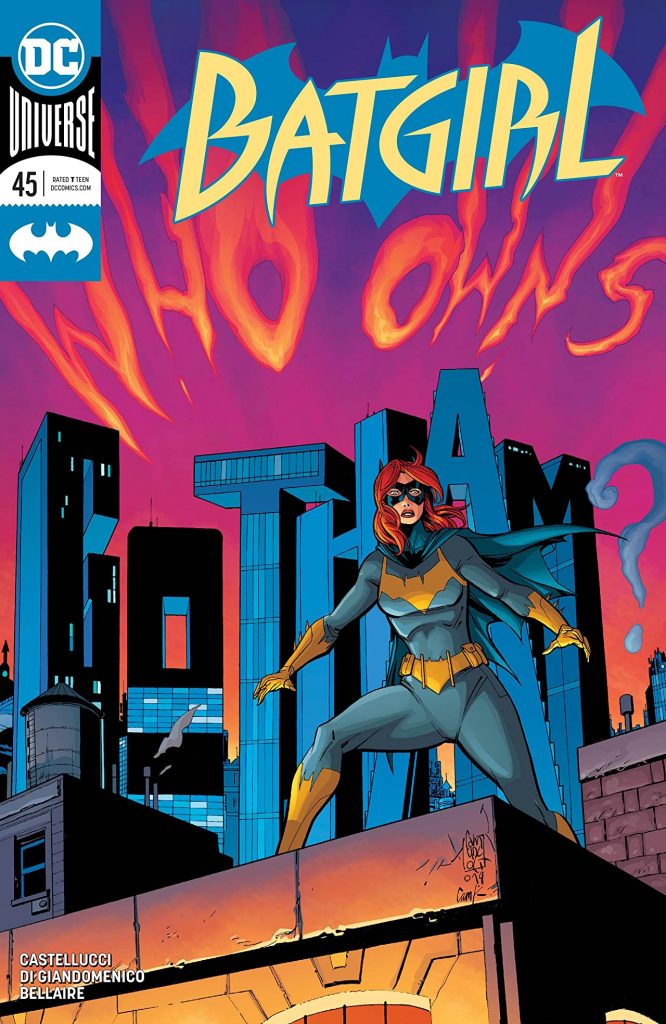 Both of this month’s covers (main by Giuseppe Camuncoli, Cam Smith and Jean-Francois Beaulieu; variant by Terry and Rachel Dodson) are cool images that make great use of color, but both portray scenes that don’t have much of anything to do with the goings-on of this issue. The action picks up right from the end of the last issue, with some poor soul in an alleyway being engulfed by a fluid, golden substance. Batgirl is on the scene just in time to save the woman from abduction by some shadowy thugs and procure a sample of the golden goo, which she brings back to her clock tower HQ to run some tests.

Meanwhile, Congresswoman Alejo is looking for energy solutions to serve areas of Gotham devastated by… well, whatever was the most recent near-cataclysm to befall the city. This leads them to enlist the services of an upstart philanthropist named Dasha Berlova, who is developing a highly-efficient new source of electrical conduction. On a tour of Berlova’s facilities, Barbara deduces that the metal she’s using for her energy project is the very same stuff that’s been turning people into gilded statues.

Artist Carmine Di Giandimenico does a good job of laying out the action, conveying a palpable sense of motion and the acrobatic capabilities of our heroine, and his art shines brightest in the closing scene at an electrical substation. He and writer Cecil Castellucci work in some action shots even when the scene doesn’t explicitly call for them: Batgirl doing a little boxing practice to liven up a scene of scientific research, Batgirl swinging into the city sky while making a call to a coworker. This is good general practice for action comics, and only goes overboard here when they have Batgirl and Batwoman fight through a discussion after running into each other while investigating the same scene.

I haven’t seen much of her in my readings since DETECTIVE COMICS shifted focus back to solo Batman stories a while ago. Kate Kane is one of my favorite Bat-characters and I can’t recall any stories with her and Barbara working together, so I’m eager to see how this team-up plays out. Catch my review right here next month to find out! – Rob Veatch III

SYNOPSIS: When tracking down an ancient evil that can hide in anyone, Red Hood and his Outlaws have to surreptitiously sniff out their enemy by similarly hiding in plain sight…Are you ready for the Outlaws to go undercover? The Untitled are unlike any foe they’ve ever faced, so if the Outlaws are going to win, they’re going to need to improvise! 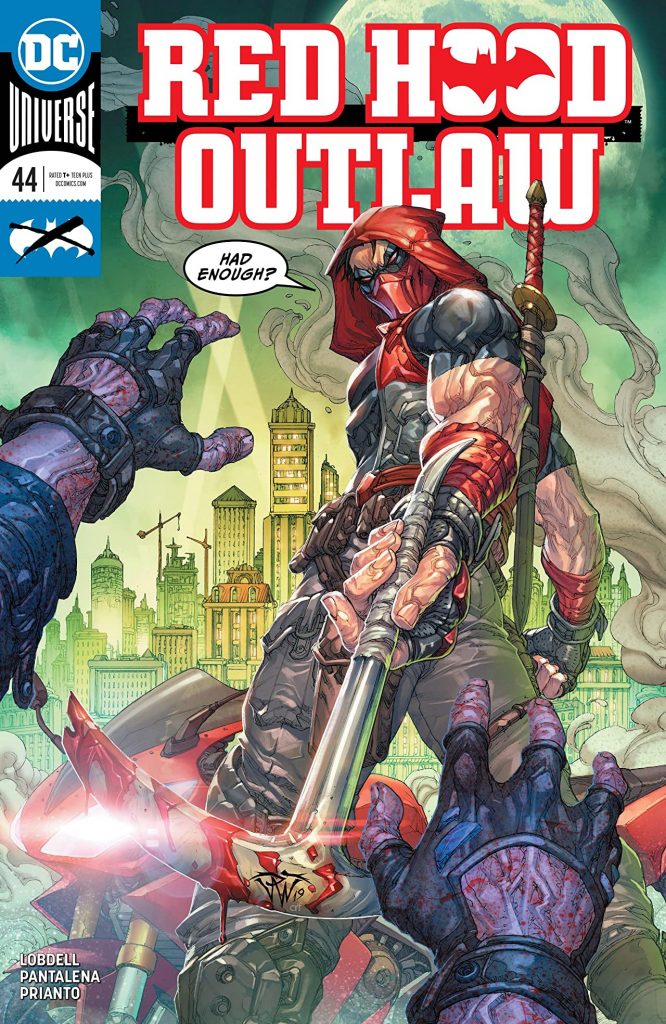 Opening in Qurac, a locale where we spend the bulk of the issue, Isabel Ardila finally comes to understand that Essence is inside her when Essence emerges to combat an Untitled who was setting up an Ambush. It’s nice to see some threads come together right at the start of the issue!

The issue really starts to open up with a two-page spread showing Jason and Bizarro operating a food truck, serving those in Qurac working toward building a democracy. Artist Paolo Pantalena and colorist Arif Prianto collaborate very well together, creating a bright, vibrant scene. Pantalena demonstrates why he’s a great fit for this title, sticking with the style established by Rocafort.

For his part, Lobdell gives Jason and B some time together to bond, allowing Jason to express his remorse. Specifics as to how Artemis and Bizarro have returned are still elusive, but at least it isn’t being totally brushed under the rug, allowing Jason to reaffirm his commitment to his teammates, who are really his family at this point.

While Jason is trying to suss out any Untitled in the crowd and contend with an in-the-field General Glory, Artemis is undercover herself, auditioning to be a bodyguard for a Quraci colonel. This leads her face to face with Essence, with the two squaring off in another two-page spread. As the threat is about to rear its head, I appreciated the two put aside the customary “let’s fight but we’re really on the same side” battle and just co-operating.

We take a brief interlude to check on Ma Gunn and her visitors. Still no sign of Generation Outlaw, but Ma settles in for tea with Brain. They have a prior relationship that I’m unfamiliar with, but that still doesn’t mean I didn’t recognize the sorrow in Monsieur Mallah’s eyes as he left the table, wounded that “Ernst” finds Ma enchanting. I still have no idea what their intent is with Ma, but I feel bad for the big lug at least.

Switching back to the dilemma in Quarac, I want to emphasize again how solid the art is. Pantalena’s work is dynamic with exciting layouts. His faces are cartoony, but still pull off expressiveness well, allowing you to understand what the characters are feeling. They only slightly get let down by some of the dialogue, with bits like the colonel asking how the students can “be so…deadly?” — seems out of place and forced.

I’m still not up to speed with Essence, the Untitled, and all that backstory entails, but I didn’t feel lost reading this. Overall, it worked for me, but for those slightly more entrenched in Red Hood lore, your mileage may vary.  General Glory feels superfluous, but his presence didn’t bring things down. It feels good having the Outlaws reunited and back to business as usual. For the first time in a few issues, I found myself enjoying the ride. Is it perfect? No. It is a step in the right direction, though, especially if you just let certain aspects go. Here’s hoping we don’t drag out what’s going on with Ma Gunn for too much longer and the Outlaws get to the bottom of their current predicament together.  – Javier E. Trujillo