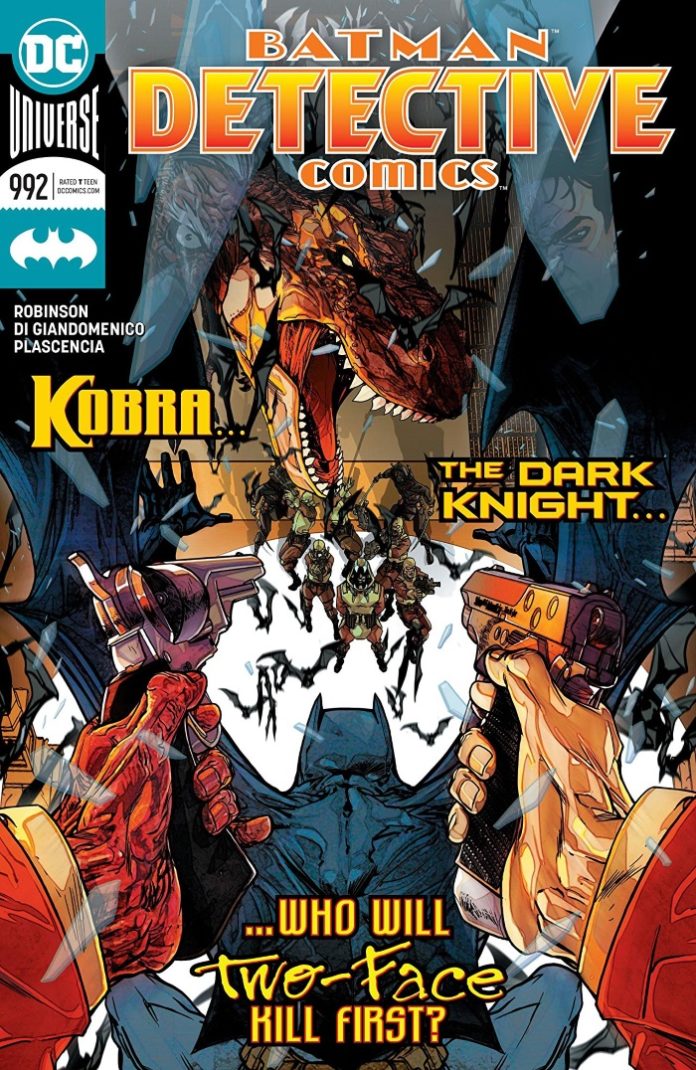 SYNOPSIS: There’s a new Dynamic Duo in Gotham City—introducing Batman and Two-Face! What the what?! The Dark Knight is forced to team with old friend and current enemy Harvey Dent to stop a Kobra-sponsored terrorist attack. Can Batman really trust his life to a coin flip? Even worse, Bats and Two-Face are of two minds over recruiting the two Fireflies for help—if Batman’s gonna work with so many villains, he may as well join the Legion of Doom.

James Robinson’s return to Gotham has been a bold adventure.

There have been homages of Bat-books and films past while bringing Batman back to his roots.  Robinson has embraced Two-Face’s publication legacy while adding his own tweaks to make the character fit the anti-hero angle.  Carmine Di Giandomnico again provides interiors that complement the writing with stunning wide shots, thrilling action and vibrant colors that catch your eye.

Robinson has been taking Two-Face in a different direction. While embracing the characters past a few issues ago, Two-Face is turning over a new leaf. Working with Batman and Gordon, agreeing not to kill, having no reason to run from a crime scene.   It sure does take a few pages to get used too. I for one have a hard time with villains turning anti-hero. From Venom to Deathstroke it does take a minute to adjust.  Robinson leads us through the book as Batman and Two-Face discuss Kobra.  Two-Face wants to know what he is going up against almost acting more like a Robin before the fight. This is a very interesting angle for Robinson to take Two-Face it is an uncharacteristic one at that.  While getting a glimpse of what is up Kobra’s sleeve, the end of the book is reminiscent of Batman Begins.  Robinson keeps the reader off balance not only in regards to Kobra but can Batman actually trust Two-face to keep the peace?

Carmine Di Giandomnico does a great job with the action panels this issue, they are not repetitive giving us different angles and perspective.  Di Giandomnico fights are good enough to be film choreographed. The reader will thoroughly enjoy watching Batman and Two-Face ambush and take out an entire Kobra swat team with ease, in there own different ways.

My only nitpicks are there are two panels with wonky faces and Batman’s ears are too short on the cowl. The later is purely personal taste.  Di Giandomnico’s draws a cowl that is reminiscent of last November’s Justice League, short and triangular. My favorite panels in the book are Batman diving into action throwing a barrage of Batarangs. A classic Batman pose and move if I ever saw one.

While this book has the least amount of detective work since Robinson has come aboard it really is a fun action book.  Great banter between hero and anti-hero as the reader and Batman both try to give Two-Face another chance.  It seems that everyone will always hold out hope that Harvey Dent is still somewhere lost in that mind.  Batman, writer and reader, we are all guilty of that.

Di Giandomnico’s artwork provides the perfect amount of action that keeps you invested from page one.

This is a solid choice for your weekly pull list! – Pete Verra