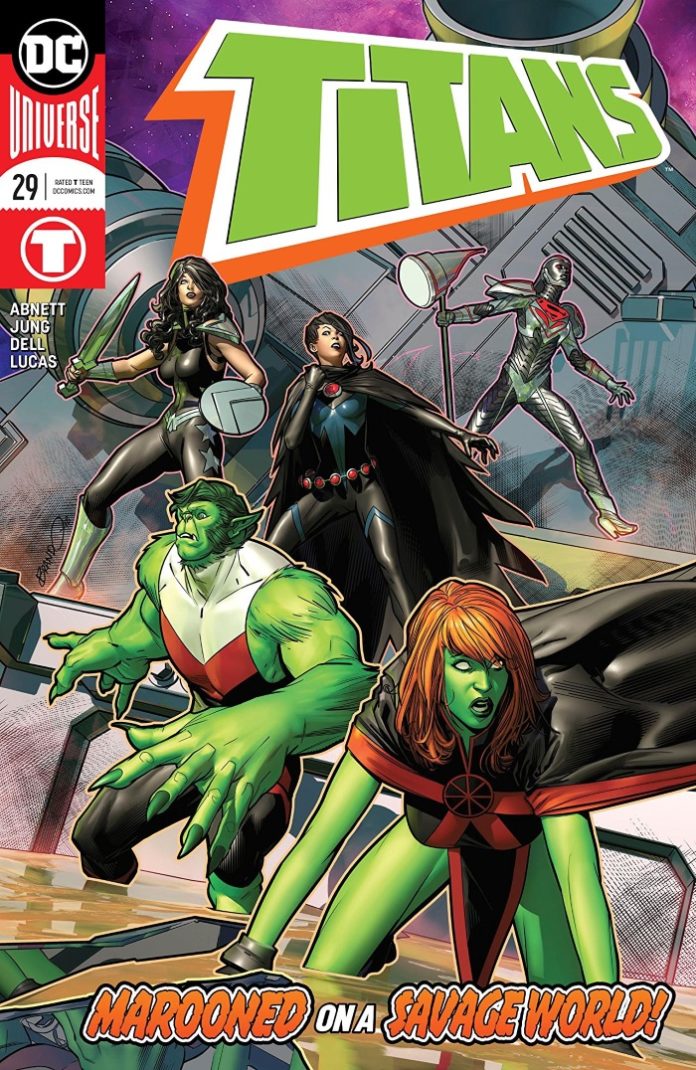 SYNOPSIS: “MAROONED” part one! After their battle with Storrm above the Drowned Earth, the Titans find themselves lost…in space! Stranded on an alien planet—far away from their Earthbound responsibilities, with no means of getting home—they’re forced to fight against an enemy that has been lurking in the shadows since the inception of this version of the Titans: their own inner demons. And maybe some outer demons as well!

Dick (or Ric if we must) Grayson getting shot in the head has been the best thing to happen to this book.

After a botched escape last issue, the Titans are stranded on an unknown planet with no resources, no communications, and seemingly no way off. Barely held together before being marooned, will they be able to keep it together to get out of their current situation?

I won’t beat around the bush: I loved this issue.

If you have been reading my reviews, you’ve probably noticed that I’ve hinted to the fact that they haven’t done much with Steel. That is finally remedied in this issue. The opening of the book is seen through her eyes. She’s the one that built the Boom Room, she’s the one piloting the team’s hasty exit, she realizes just how bad this all could be, and this is all within the first three pages. Normally, I’m a fan of a character showing rather than telling, but in Steel’s narration, we learn more about her in those three pages than we have in the previous six issues. Steel is a perfectionist, every detail is planned, and she doesn’t like going off script. It is all ripe for conflict, and that’s before Donna has to push all of those buttons.

Donna is the best character, at least in this arc. In a moment when Steel is beating herself up for the team being stuck, a traditional leader probably works to assure their teammate they shouldn’t beat themselves up. Donna is not that kind of leader. She knows she should lead, and everyone falls in line without questioning it, but where other leaders try to defuse the conflict, Donna IS the conflict. Donna and Steel eventually have that heart to heart, but that initial argument sends the rest of the team on a crash course to confront their own demons, literally.

Feeling helpless, Beast Boy lets go and becomes the brooding mindless (for lack of a better word) beast he has feared. Simultaneously, Miss Martian is injured to the point where she loses control and the white martian is unleashed. The sins of the team literally become monsters they must all confront.

This book had me hanging on to the edge of my seat. This turnaround deserves some praise, and I cannot wait to see what happens next. – E. Chad Metz