SYNOPSIS: “Ugly Heart” part two! Two-Face has returned, and his Church of the Two has grown into one of the most dangerous and destructive cults Gotham City has ever seen. So why is the only person trying to kill Two-Face his own alter ego, Harvey Dent? Batman at last has found hope of a permanent cure for his friend’s evil split personality-but if there’s hope of ridding the world of the dreaded Two-Face for good, Bruce and Harvey must team up to beat back the bad. 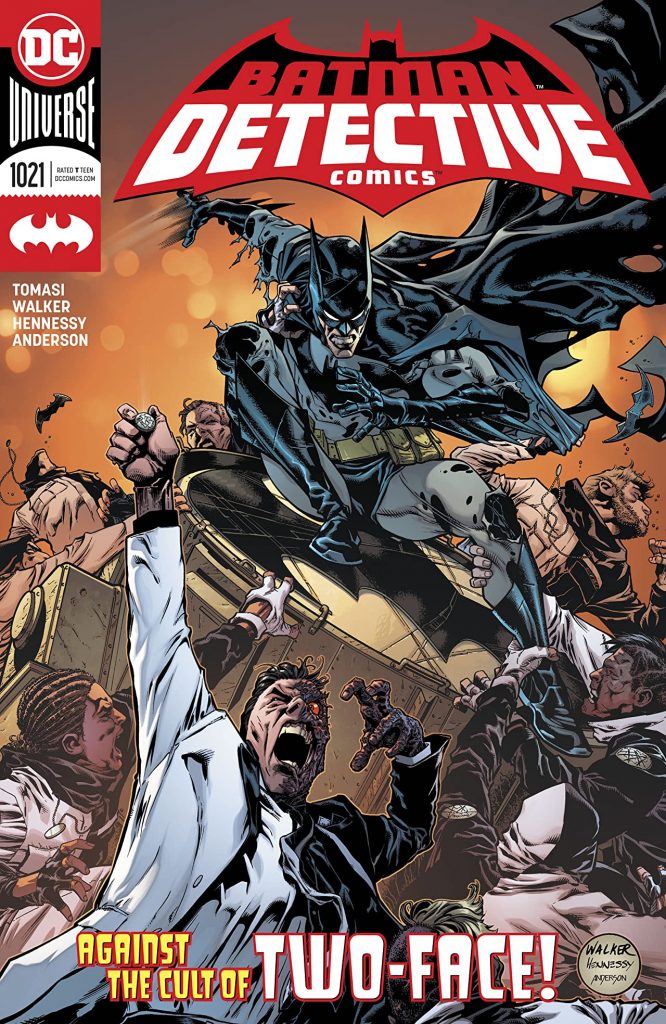 DETECTIVE COMICS #1021 continues Peter Tomasi’s Waco/cult spin on Two-Face.  Here, Two-Face has taken a page from Deacon Blackfire’s playbook and built his clubhouse underneath his personal cathedral, the Gotham City Courthouse.  Brad Walker is back and provides interior artwork that could wallpaper three rooms of your house with plenty to spare.

Tomasi does a great job playing both sides of Two-Face, pitting them against each other.  Dent is keeping secrets from Two-Face, one might say it’s the most valuable secret in Gotham.  The inner turmoil that goes on between Dent and Two-Face is a joy to behold.  Dent is broken at his end seeking help in the only man he trusts, Bruce Wayne.  While Two-Face is as off his rocker as ever. He is still faithful to his beloved coin, Two-Face is now manipulating the terminally ill of Gotham to not only fight for his cause but take on a taste and appearance for the dramatic that only he can offer.  Black and white suits, coins, scars, and self-mutilation are all necessities for this fan club.

I honestly think Tomasi’s Batman does not get the credit he deserves.  People are not talking enough about how he nails the character in almost every issue.  While Scott Snyder and Tom King still seem to hold the reigns on social media as the “guys” when it comes to Batman. Tomasi is so inside the detective part of Batman’s brain it’s scary.  There are no gimmicks when it comes to this Batman, this is the essence of Batman.  From the first page, Tomasi captivates you.  The inner monologue is beautiful, all about the crime scene, assessing from above.  Asking all the right questions to himself that allows the reader to follow along simply as the character narrates his next move.  The way Tomasi writes Batman in these books is like the reader is an invisible Robin along for the ride.  You get all the information you need step by step just as if the Boy Wonder was there.  Not only moving along the story but making you feel like you are incorporated into the story.

While nine times out of ten Tomasi perfectly nails Batman’s actions and motives I have only one gripe in this issue.  After the Dent/Batman confrontation which Tomasi nailed between the two. It provides one of the most un-Batman moves ever.  Instead of following through with the plan and taking Dent to Arkham, he makes a pit stop that allows Two-Face to get the upper hand.  As good as Tomasi’s Batman is with due diligence and I have preached that in almost every review, this seems way out of character.  Batman is notorious for completing the task at hand before starting the next, but like I said nine times out of ten, this is ten.  This does set up one of the more OMG endings in a Bat-book you will find. So take that for what you will.

Brad Walker continues to make his mark on Batman.  The way his Batman steps out of the shadows in the morgue is nothing short of breathtaking.  The rainwater dripping as he steps into the light, the reaction of the mortician, definitive and perfect.  There is something about the way that Walker draws Batman’s eyes in the cowl, those little slits of white, the perfect scowl.  Giving me vibes of that close-up shot in the B:TAS open.  While speaking of B:TAS Walker’s Batmobile looks like a beautiful update of that car, long and sleek, I love the placement of the headlights, very creative!  One of my many favorite panels in the book is seeing Batman grapnel out of the Batmobile, it doesn’t get better than that!

Walker’s Two-Face looks about as angry as you have ever seen him.   On close up panels the way his lip and nostril both snarl-up is truly perfect.  Just as Walker does with Batman, Two-Face’s eyes do add some depth to his close-ups.  At times he looks like his eye is about to pop right out of his skull.  When Dent is in control you can tell the difference. His body language is less confident, more slouched over, particularly in the Batmobile.  Not only do you get some great writing to differentiate the two, but the artwork really does sell this aspect of the character to the reader.  And that suit, looks right out of Villanova head coach Jay Write’s closet, perfectly pressed and tailored to fit, love the yin and yang look.

As he did the last issue, Walker does have an interesting way of placing his panels, rectangles, and squares of all sizes.  While I was shocked that there were a few black spaces, Walker does make up for it with some beautiful splash pages and the best Bat-chin you have ever seen grace the pages of DETECTIVE COMICS.

DETECTIVE COMICS #1021 is a real fun ride from page one to the conclusion.  Setting up what we can only hope is a three-way battle royal that Bat-fans have been dreaming of.  Tomasi deserves some credit for being so extremely faithful to the character of Batman.  The only book that can rival Tomasi’s DC is Warren Ellis’ THE BATMAN’S GRAVE.  Brad Walker keeps climbing up my personal artist rankings with every page and panel.  This creative team works so well together, and it shows in the final product.  Writer and artist working in unison making this issue a must-have for your pull list.

Stay safe out there BOFers and stay indoors! – Peter Verra