SYNOPSIS: Witness the final battle of the two Bats in this conclusion to the second installment of the White Knight saga! After learning the truth about his name and fortune, Bruce Wayne has made a shocking public announcement in pursuit of redemption-but before he can secure Gotham’s future and prosperity once and for all, he must protect the city in one last brutal showdown with Azrael. With Batman devastated by his shattered identity and with little left to lose, there may be nothing left to stop him from abandoning his code and resorting to one unthinkable desperate measure. 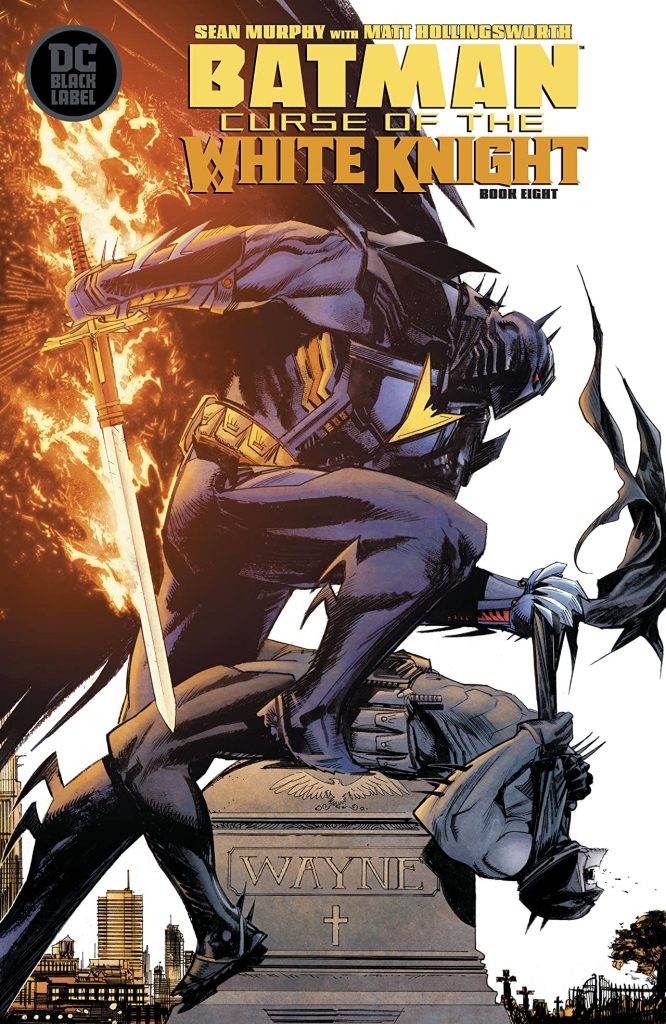 We have reached “The Main Event.”

The most anticipated fight between the two since the end of KNIGHTFALL in the 90’s.

And to me, this one is a better match, in every way possible.

If you disagree (I’m looking at you Ryan Hoss), just hang in there with me.

Let’s rewind this story: A man named Jean-Paul Valley was given a new life while reaching the end of his. He feels he’s being sent on a holy mission to hunt down The Batman. Nothing, and no one, stands in his way, not even Jim Gordon, Barbara Gordon, GCPD or The Joker — as Valley (now Azrael) is on a mission to revive a centuries-old rivalry that involves Bruce Wayne.

And speaking of Bruce, did you know he was Batman?!

After last month’s quiet penultimate issue (which was still really good), we jump right into the action here. The BATMAN ’89 Batmobile (was I the only one hearing “Descent Into Mystery” here?) is roaring through Gotham, and aims to give Azrael whiplash. Batman and Azrael ultimately fight it out, and brings Bruce to a defining decision: cross the line or remain loyal to who Batman is?

Sean Murphy’s instant classic, BATMAN: WHITE KNIGHT, ended on a grand scale, full of eye-popping visuals and a ton of action. That was great, it served the story well. The writer/artist mixed it up here, and that’s refreshing. This has been a smaller, more emotional tale that’s unraveled, so it deserved a smaller, more personal fight between the adversaries. It was exactly what we needed for another ending that’s tied up with a perfect bow.

I applaud Murphy, and have been since before WHITE KNIGHT was released. He’s a very talented artist, that proved he has the words to back it up.

With CURSE, he had a daunting task of creating a sequel that would live up to the original. And boy did it ever. Murphy hit many notes that define a solid story: great characters, striking visuals, a hero to root for, a villain to hate, and tons of emotional surprises. I wasn’t thrilled in learning that Azrael was going to be included, but I was won over. He’s essential to this story and I can’t wait to read it in collected form.

Word in Gotham has it that the next big chapter in the “Murphyverse” will touch on BATMAN BEYOND.

I can’t wait for the future. – Ryan Lower

PEACEMAKER Getting a Season 2 & Another THE SUICIDE SQUAD Spinoff...