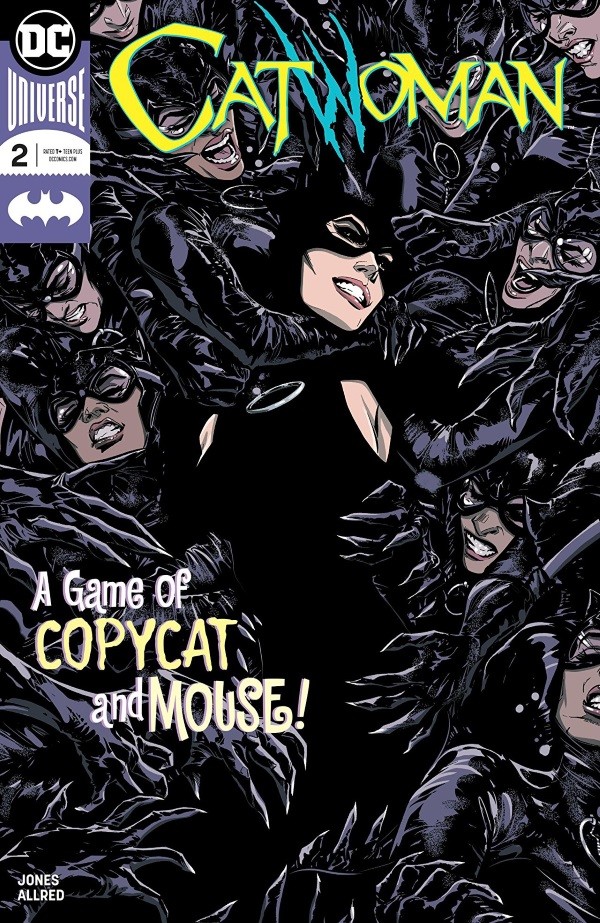 SYNOPSIS: Gotham’s a toxic litter box for Selina Kyle of late, so she hits the road looking to clear the air, change her look and clear her name, too—there’s a copycat burglar swiping her M.O. who needs sorting out. In her hometown, Catwoman runs afoul of a crime boss who’s also hunting this impostor. Can the two declare a truce to hunt a mutual enemy, or will Selina end up just more roadkill?

Selina Kyle continues her lonely honeymoon this week in Catwoman #2. We pick up immediately where we left off last month, with a 2018 version of Fight Club. It’s artistic, violent, fun and unsurprising in who comes out on top. Speaking of on top, we’re immediately taken to another panel reminiscent of Batman Returns, where I was waiting for a dialogue bubble to appear: “A kiss can be even deadlier if you mean it.” Our heroine then teases us with a few new tools for her arsenal, and we check in with the grotesque villain introduced to us in the first issue.

Last month, I praised Joelle Jones on a level I rarely do (outside of Sean Murphy’s White Knight). That praise continues. Catwoman #2 is a perfectly paced, sharp comic book that has me ready for the next chapter. My favorite comics are ones that don’t take me long to read. Not because I’m illiterate or need to get through it, but because it proves the book has sliced the fat and gets to the point. Though it’s early, that’s what Catwoman has been for me. And with Jones in full control, she gets all the credit.

While the story moves at a brisk pace, you’ll hit the pause button to embrace the beauty of each page. Jones does a wonderful job sketching her characters. They all are instantly recognizable as her style, but there are subtle changes to make each one stand out. For example, the opening fight was in a room full of Catwomen. While all were wearing the “same suit”, every suit was a tad different. It’d be easy to lose Selina, but she’s distinctly drawn so we never do.

Another plus are the variety of backgrounds used in each panel. Jones plays with shadows and silhouettes, which help the characters pop. A few panels at the beginning reminded me of the 60’s series with their single-colored background. Simple, yet effective. And I have to mention the last few pages, which seemed (to me) heavily inspired from a 1950’s Las Vegas club. Unique, open for interpretation, and very detailed. I loved it.

This issue is extremely solid. It’s tighter than Selina’s leather suit, and moves at a brisk pace. That’s effective, exciting storytelling. We move on a little in the narrative, but really plant the seeds for what’s to come. And fortunately (or unfortunately), that’ll include one of the most grotesque villains we’ve seen in a long time. Selina may be dressed to impress, but her claws are out and she’s ready to pounce.