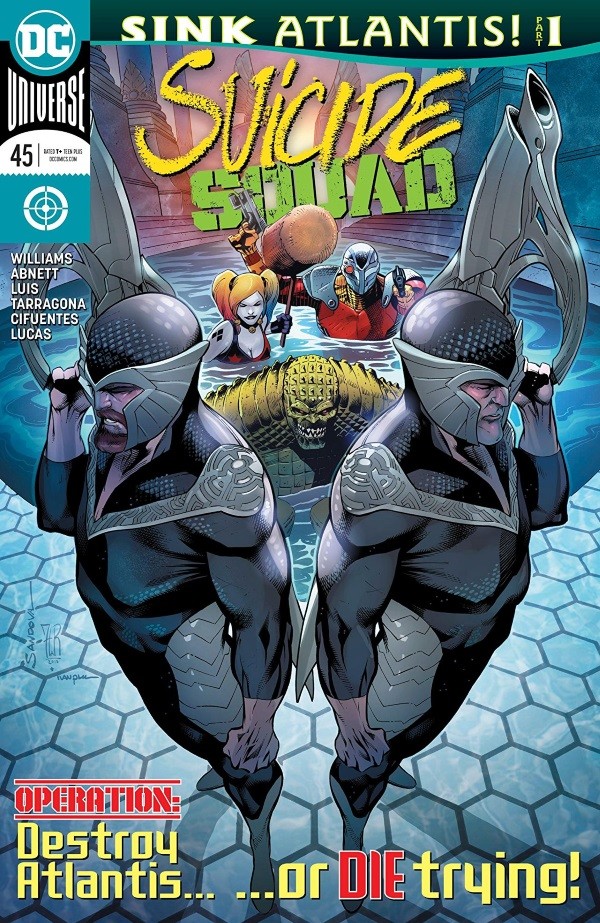 SYNOPSIS: Don’t miss part one of “Sink Atlantis,” continuing in AQUAMAN #39, also on sale in August! After Aquaman’s undersea kingdom rises to become a world power of the surface, the Suicide Squad must infiltrate the city and send it back to the depths or die trying. But sinking Aquaman’s city isn’t Task Force X’s only objective in Atlantis. There’s something buried there that Amanda Waller wants, and this is her chance to claim it.

AND AN ENTIRE CITY RISING UP OUT OF THE OCEAN RIGHT BEHIND IT!

That is how the beginning of the two part Suicide Squad/Aquaman crossover “Sink Atlantis!  Part 1” begins.

It’s the day of Queen Mera’s coronation, and Aquaman has subconsciously made a wish (Dark Nights: Metal #6) that has raised Atlantis to the surface off the United States coast.  Seeing this as a threat, a security briefing is called and Amanda Waller calls on the Suicide Squad to “quietly” return Atlantis back under the sea.  Deadshot, Harley Quinn, and Killer Croc are sent along with two new recruits to Task Force X, Lord Satanis and Master Jailer.  She gives Lord Satanis a magical orb that will reverse Aquaman’s wish.  Waller informs them she has someone inside Atlantis who will assist them in getting past the security and getting them to the Silent School where they can plant the orb and raise Atlantis back to the surface.  This all seems easy enough, but as we know with Amanda Waller that is never the case.  She has been given strict orders by Admiral Meddinghouse that if she fails it’s the end of her and Task Force X.

Meanwhile, Aquaman is in self-imposed seclusion due to the events of the Atlantean Civil War.  He doesn’t want his presence as a “failed king” to take away from Mera’s day, but he also knows since he was the one who raised Atlantis he must do whatever he can to protect her from the “surface dwellers”.  Nuidis Vulko, his friend and regent, consults with him about the impending attack from the humans and fears the Atlanteans might attack first, but Aquaman tells him that is no longer his decision.

With all the pieces in place the story begins to take shape.  Veteran writers Dan Abnett (Aquaman) and Rob Williams along with legendary artist Jose Luis combine their talents into creating a vibrant first act in this story.  Their decision to replace Task Force X regulars Katana, Enchantress, and Captain Boomerang with Superman villains Lord Satanis and Master Jailer let the reader know just how high the stakes are for Waller.   She needs this to work.   On the other side, Abnett continues to show Aquaman’s descent into despair after he was booted off the throne by the Council of Elders.  That one action began a series of events that lead to the Atlantean Civil War and ended with Mera defeating Orn Marius to win the throne as Queen of Atlantis.

As you can see this crossover does rely on you having at least some knowledge of the events that came before it in both Aquaman #38 and Dark Nights: Metal #6.  While it won’t completely confuse you in this story it would help to know Aquaman’s motivation for doing the things he does.

As this is the first part of a two part story it ends with a cliffhanger that gives a huge clue as to the true nature of their mission.  I am very interested to see how this all plays out, specifically for Aquaman.  Abnett’s two year run as writer for “The King of the Seven Seas” will be coming to an end soon and I am sure he wants to leave with a bang.  I also want to see how the inclusion of Lord Satanis and Master Jailer impact the fortunes of Task Force X and what Waller REALLY wants out of this.  Things are never as they seem with her. – Eric Holzmann 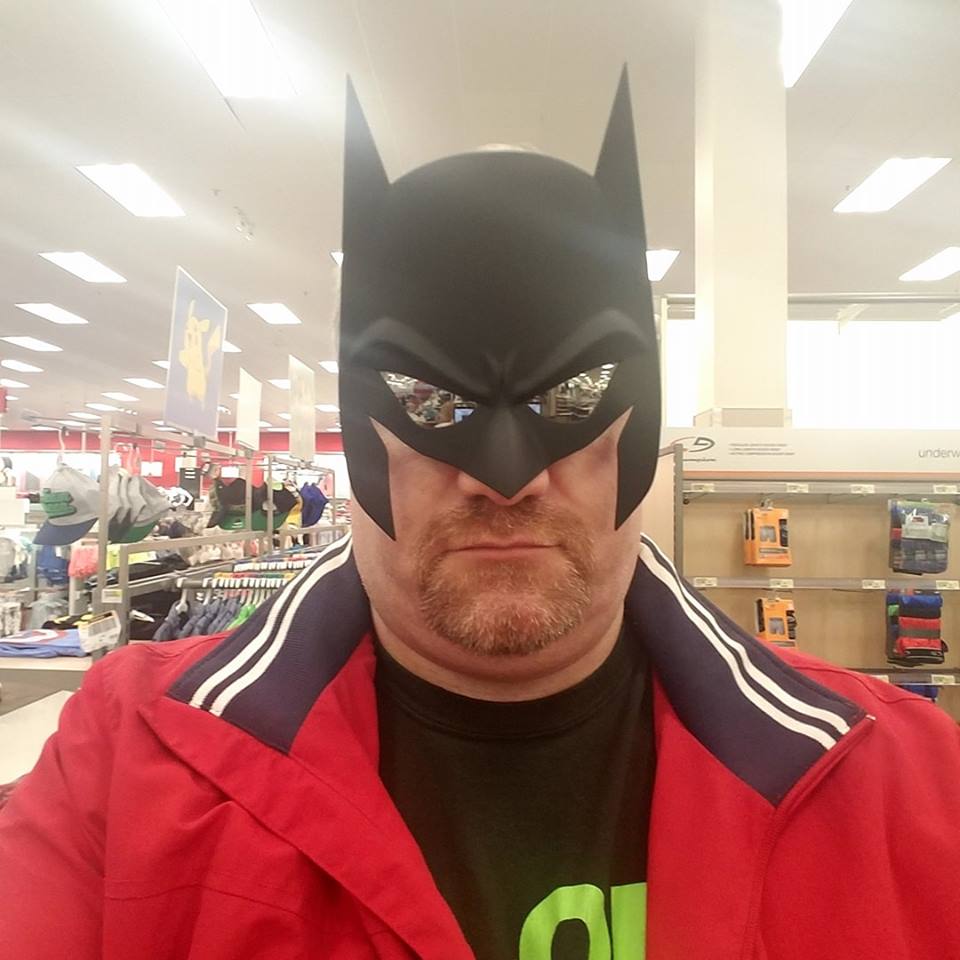 He’s the youngest of 8 children and happens to be the only one with a Y chromosome.  He’s an uncle to 19 nieces and nephews and a great uncle to two great nieces and one great nephew.  He has a dog named Princess Leia  He is the creator, host, and producer of Schadenfreude Radio and the co-creator, co-host, and producer of Mann Up!  He loves movies, music, cooking, football, basketball, and singing.  (He’s actually a pretty good singer too.)

Why is any of this important to Batman On Film?  Oh! It’s not, but we had to write a bio for him and we figured we’d let you know who he is.

Now for Batman… his love of the Dark Knight began as a little boy watching the SUPER FRIENDS cartoon every Saturday morning and the BATMAN ’66 reruns on TV.   The peak of this love came in 1989 when Tim Burton’s BATMAN took over his life. At only 13 years old he managed to see it 8 times in the theater and it holds the distinction of being the last movie he saw at a drive-in.

Hailing from Long Islan, NY, Eric contributes to BOF as an occasional editorialist, movie reviewer, and reviews the SUICIDE SQUAD comic for the site.