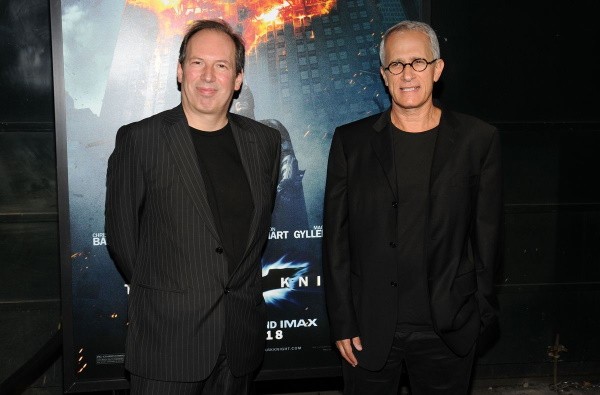 Interview by Christina Han for BOF

Hans Zimmer and James Newton Howard are two of the most prolific composers of modern times. Collectively, their work has spanned movies such as PRETTY WOMAN GLADIATOR, and the PIRATES OF THE CARIBBEAN trilogy. Their music is epic, beautiful, and evokes the drama and passion of the hugest cinematic blockbusters. So it’s surprising how both started their careers in pop bands such as THE BUGGLES and TOTO. Their unusual backgrounds have shaped them into humble and charismatic men who just happen to be geniuses that relish every aspect of their work.

When Chris Nolan introduced audiences to his new version of Batman, viewers were wary of what to expect with every aspect of the film from the director’s vision to the music. Zimmer and Howard’s majestic score for BATMAN BEGINS helped shape the plot without overwhelming the scenes. Their music ranged from subtle in Bruce Wayne’s childhood interactions with his father, to grandiose in his sojourn to remote Nordic locales. The composers produced a new theme for the Batman franchise, and in turn, revealed the music to be a character within itself.

This summer’s THE DARK KNIGHT is arguably the most anticipated movie of the year. From Nolan’s concept of a darker and more anarchic Joker to Heath Ledger’s much too early and tragic demise, every aspect of this new Batman is eagerly anticipated. The possibilities of the somber hero struggling against his fiercest nemesis are endless and this chaotic collision will be captured in the score. “The Joker definitely has his own theme and it’s the complete opposite of elegant. It’s very provocative and very raw.” Zimmer told BOF, although both he and Howard are careful not to reveal too much about the film. “James did an amazingly elegant job with Harvey Dent. It goes from extraordinarily elegant to the depths of despair” hints Zimmer. He and Howard split duties for the title character’s dual sides “as Bruce Wayne is very much James Newton Howard’s work and Batman is very much (my) work. Once he puts the mask on, it gets pretty brutal…very brutal.”

The collaboration between the two composers is one of shared friendship and equality. “BATMAN BEGINS was very much a partnership. There’s nothing we did that we didn’t do together, and Chris (Nolan) really enjoyed that,” states Zimmer. Nolan is notorious for working with his small band of close friends and relatives. As Howard and Zimmer have known each other for more than twenty years, they waited for the right project to come along before they embarked on a professional relationship. “When Chris approached us, I didn’t want to do it,” says Zimmer, “The character has to have a personality and I thought it needed more of a conversation. I didn’t want to follow in anybody’s footsteps.” But Nolan’s portrayal of the classic superhero and his origins (for the first time on film) became too good of an opportunity to slip by.

Although this Nolan’s “Batman on film” is expected to become a trilogy, both James Newton Howard and Hans Zimmer still slip into the past with every assignment completed. Zimmer claims that “When I finished my first movie score, I thought that would be the last. I still think every job will be the last” as Howard agrees that “fear is a great motivator.” With BATMAN BEGINS already reverberating with anxious energy and anticipation, everything about the movie looks to demolish the previous notions of Batman, while taking the protagonist to a completely new cinematic level. It seems that Howard and Zimmer have contributed to this monumental project by providing yet another layered and fascinating soundtrack to this historical event. – Christina Han

BATWOMAN: As Expected, Batman is Off-Limits…Basically