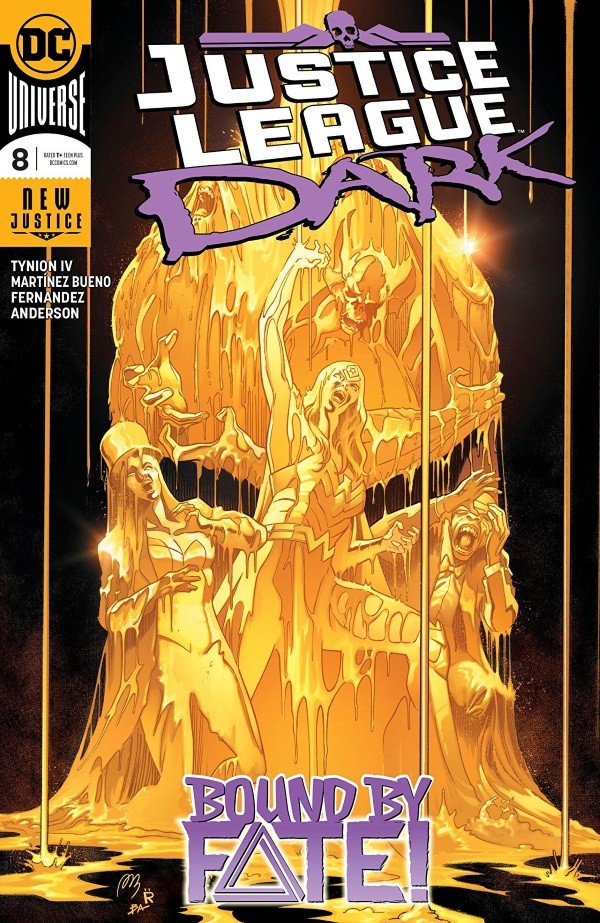 SYNOPSIS: “LORDS OF ORDER” part one! Wonder Woman and the Justice League Dark are in a race against time as the Otherkind close in on the rest of the magical community. With the world’s magic failing, the team needs to rally the magic wielders of Earth together. But can they face down Doctor Fate and his newly assembled Lords of Order?!

Well, it’s that time of the month again: the newest Justice League Dark book hits stores today, and I have to say, it is just as miserable and undesirable as the polar vortex that graced my area of the country recently.

Justice League Dark #8 splits up the eponymous team as each group faces a unique challenge; Zatanna and Wonder woman are on a quest to track down the sorcerer Mordu, Detective Chimp and Swamp Thing defend the Oblivion Bar (and all of its patrons) from an attack of Otherkind, and Man-Bat researches a way to free a young man, Khalid Nassour, from the vase in which he is supernaturally trapped.

Each month, I do my best to give this book an honest, fair shake; oftentimes that means re-reading parts of the story or even reading the entire book again a second time just to make sure I haven’t missed anything.

But when the thought of re-reading a comic book feels like an arduous task, I think we can all agree that something has gone horribly, horribly wrong.  There is no joy to be found in this book, no intrigue, no emotion, no love.  It’s all so… egregiously bland.

The master of modern horror, Stephen King, said this: “In many cases when a reader puts a story aside because it ‘got boring,’ the boredom arose because the writer grew enchanted with his powers of description and lost sight of his priority, which is to keep the ball rolling.”  Tynion is boring me senseless with JLD, and his rolling ball is aimless and uninspired.  There’s no weight to any of the events.  Nothing feels dangerous, perilous, or frightening.  It is superficial, tedious writing.

The only merit I can give the book comes in the form of the solid artwork by Bueno and Anderson.  We get some dynamic layouts and vivid colors that span both pages at times, but it is tantamount to lipstick on this pig of a story.

The inconsistency in storytelling from issue to issue is maddening.  These characters that Tynion is using have stood the test of time for a reason (as has the magnificent world they inhabit), but this whole enterprise lacks so much focus and shifts in quality so drastically from month to month it is impossible to get excited it.

This book is available 2/13, the day before Valentine’s Day.  Trust me when I say, you will not be sending this comic a card with the words “Be Mine” on it. – John Funderburg