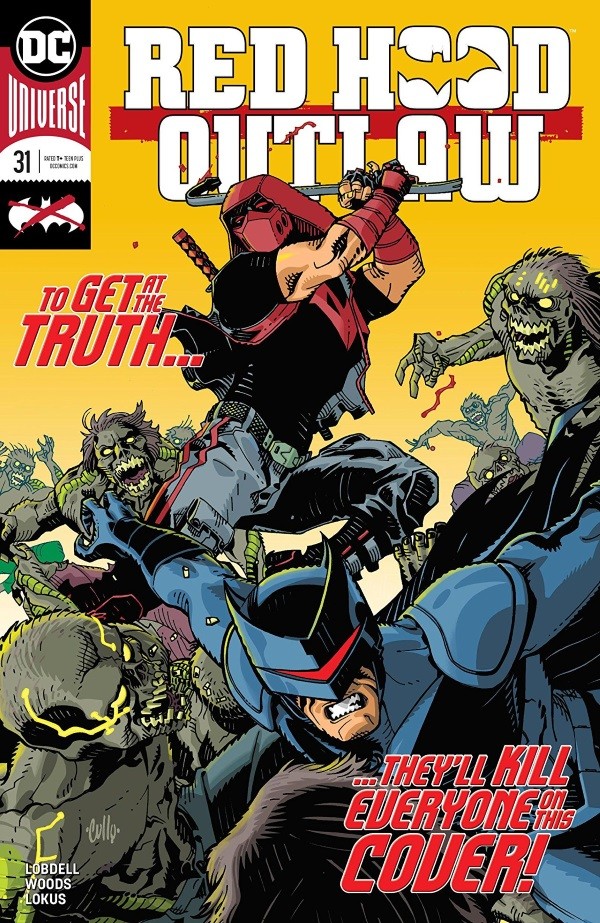 SYNOPSIS: Red Hood and Arsenal began this investigation of the Underlife together in Beijing, and this is where it ends: in an abandoned prison in Mexico. With Roy Harper having passed, Jason Todd finds himself teamed with an ally he couldn’t have imagined—Wingman! (But wait—wasn’t Jason the face beneath Wingman’s mask in BATMAN INCORPORATED?!) When it is all over, Red Hood arrives at a conclusion that will shake the streets of Gotham City…forever?

Ever since Jason left Gotham to go on the hunt for The Underlife a few months ago this book has been pretty aimless. A road story featuring a vigilante trained by Batman could be really awesome. Sadly, that’s not been the case for the most part.

Jason’s mission was to find The Underlife. Which he did, but it wasn’t exactly satisfying. That’s something I’ve noticed about Lobdell. He can set up some very interesting ideas and stretch them across multiple issues, but the payoff almost always falls short.

In the last issue, Jason finally went head-to-head with Wingman and discovered that Bunker was being held captive. I have to admit, I love that Wingman and Bunker are becoming integrated into this book. Wingman is just a neat pull from Morrison’s Batman Inc. run and Bunker is a really cool character all around.

The conclusion of this issue is the worst thing Lobdell has done, in my opinion. The wasted potential of Solitary is downright shameful. Granted, he could be brought back into the fold later. Which I hope is the case. I can’t wait to see Jason’s return to Gotham though. Especially with the little nugget Wingman dropped. Could Jason be going up against the caped crusader again? If so, Lobdell has sold me another issue. – Justin Lee