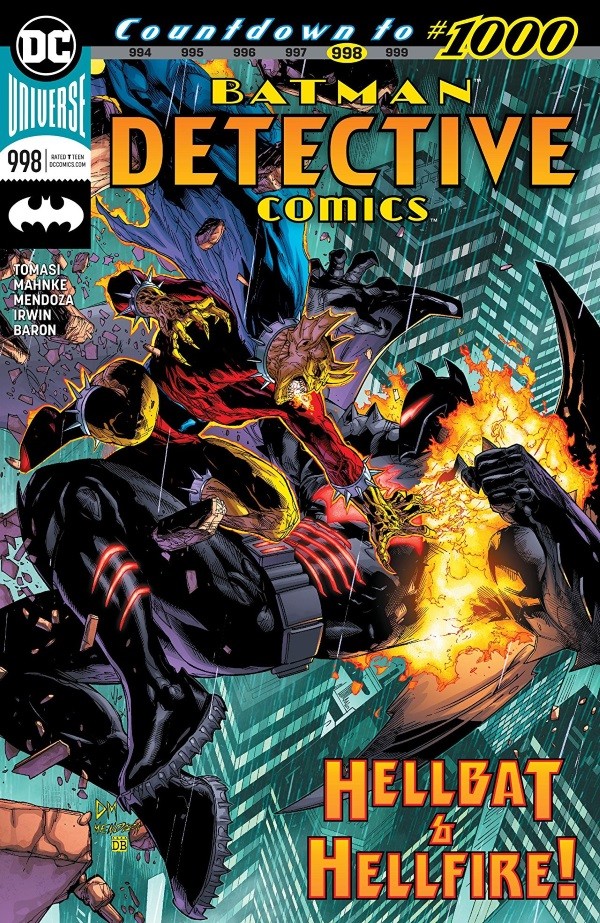 SYNOPSIS: Batman’s tried everything on Earth to stop the menace hunting his friends and family…now it’s time to turn to things not of this Earth! In the past, whenever Batman’s encountered the supernatural, he’s turned to Jason Blood for guidance—and to Etrigan, the demonic entity living inside him! But securing their help is never simple, and what Blood has to show him will shake Batman to his core!

Where do I begin?  At this point, Peter J. Tomasi could write Batman in neon yellow scuba gear and it will be my book of the week.   There’s some 90’s a-hole Batman, there’s a pinch of the Arkham games and just the perfect amount of classic Caped Crusader in this issue. It has something for everyone and the best part of the story is that we still have no idea who is taking out Batman’s mentors.

Tomasi is a master of the internal monologue, he is literally inside Batman’s brain.  Batman’s thought process, his actions, rage, and motives are all spot on.  I believe at this moment Tomasi is the best Batman writer, right now.  No one in a very long time has reached down this deep into the psyche of The Dark Knight.

Batman’s interrogation of Hugo Strange gives me vibes of The Dark Knight interrogation scene with The Joker.  There is nothing more powerful than Batman at the end of his rope trying to save/protect the people that mean the world to him, his unit.

Normally I do not get into Batman and the supernatural. Tynion did a wonderful job with Batman and Zatanna during his run but this is different.  This is Batman and DC’s lyrical genius Etrigan the Demon.  Not once did I even think about a monster fighting Batman in a mech suit. All that was on my mind was, where is this taking me?

Tomasi brilliantly bridges gaps between stories that are not even his. Is there anything this guy can’t do right now?  Since Tomasi has been called in from the bullpen he has thrown nothing but strikes and I’m dying for more, much more!  I’ll go out on a limb and call this the best supernatural Batman story I have ever read.

Throw Doug Mahnke up with any of the great Batman artists of our time.

His backgrounds are detailed, his splash pages are stunning, the action panels keep you on the edge of your seat. This guy is an all-star and is welcome back in Gotham whenever he wants.  I’ve grown to really appreciate Mahnke’s layouts, his panel placement really helps tell the story.   The book has that classic comic book look to it.

Opening with two jaw-dropping intense pages and from those pages alone you can tell Batman is in no mood for Hugo Strange, I haven’t seen our favorite vigilante this angry in a long time. The action in the book is bold and a display of Mahnke’s talents.

What really caught my eye was how Mahnke drew Entrigan, I feel like The Demon is normally a short and stocky looking brute. Mahnke takes a different approach, making the character a bit more slender and agile looking.  Here Entrigan looks like a cross between the Creeper and a Gremlin. I have to say I think this is an improvement in the character’s design.

Detective #998 is a really great story plain and simple.  Tomasi keeps the reader guessing with Batman and only Tomasi knows where this book is headed — and I couldn’t be happier.

Earlier in this arc, I said he brought the detective back in Detective Comics.  In doing so he has also instilled mystery in the minds of the reader.  It’s almost as if we the readers are Robin and investigating this case with our mentor as he is hunting the person trying to kill his mentors, that’s meta.

This issue is a must-have for your pull list this week.  This is just the nonstop balls to the wall insanity that comic book readers will eat up. You will not want to miss this insane story! – Pete Verra