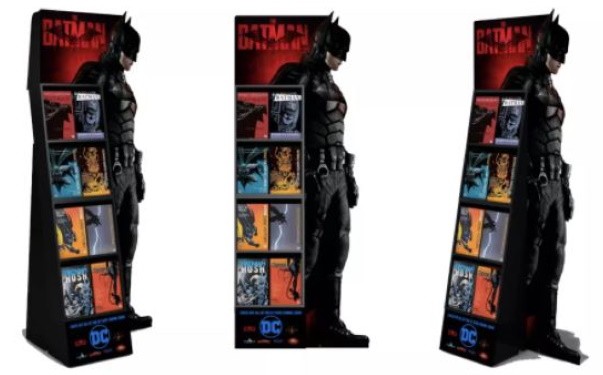 DC Comics is sending 6′ tall comic book displays to comic book shops to promote some specific Batman comics coinciding with the release of THE BATMAN on March 4, 2022.  The displays will be in shops by late February and will be filled with the following Batman comics…

Obviously, some of these books have nothing to do with THE BATMAN, but some of the comic book influences on the film are here; such as YEAR ONE, THE LONG HALLOWEEN, and BATMAN: EGO.  Also, BATMAN: DAMNED can be included because the Batsuit Robert Pattinson wears in THE BATMAN was heavily influenced by artist Lee Bermejo’s version of Batman.  Furthermore, BATMAN: THE IMPOSTER was written by Mattson Tomlin did some uncredited work on THE BATMAN script with Matt Reeves and its take on Batman is very close to that of film.

Now, I’ve got to hit up my friends at DC Comics and see if I can get hold of one of these things to add to the BOF home office! – Bill “Jett” Ramey

(Thanks to Senior BOF Contributor Ryan Lower for the heads up!)

Bruce Wayne Has Been Cast…in TITANS