Warner Bros. (and New Line) has revealed the 2022 release dates for the following DC movies:

A sequel to AQUAMAN is a no-brainer and we’ve long knew that was coming.  AQUAMAN 2 getting a release date similar to the original makes sense as well.

I suppose we’ll be getting “Aquaman vs. Black Manta” — but didn’t we already get that?  And Arthur (Jason Mamoa) already kicked his ass, right?

Personally, I’m not much on seeing a rehash of something we’ve already seen, but I trust James Wan will come up with something new and not what we may be expecting…

So THE FLASH gets yet another release date.

While I’m still in “I’ll believe it when I see it” mode when it comes to this film, I’m hoping this 8th time-plus is a charm.

If I’m Warner Bros., I’m going to “Matt Reeves/THE BATMAN” this project — if you get my drift — by hiring a filmmaker with a vision and passion for the character/project and let him do his thing.

That means letting him bring in his own Barry Allen, cast, and allowing him to make the movie he wants to make.

No offense to Ezra Miller, but I don’t think his version of The Flash is so beloved that he MUST return for this solo film project.  And honestly, I have very little interest in seeing this film if there isn’t a recast/reboot ala Matt Reeves’ THE BATMAN.

But that’s just me.  And FINALLY… 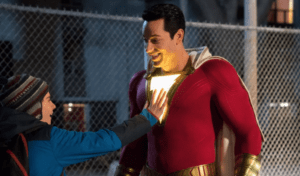 Won’t Asher Angel be too old to play Billy Batson by the time filming begins?  Furthermore, won’t the entire “Shazam Family” — the kids before that “Shazam-up,” that is — have aged out as well?

Hell, Ron Howard was still playing a teenage Richie Cunningham on HAPPY DAYS when he was 42 years old, so I guess the young Mr. Angel might be able to pull off the 15-ish Billy at least one more time.

(RANT: Bill Batson should be a child of about 11 or 12, 13 tops; not a high schooler.  And “Shazam” will always be Captain Marvel to me!  Shazam is the damn wizard who gave Billy his powers, and the ‘ol Captain is who he becomes when he yells the wizard’s name.  Look, I really liked SHAZAM! and I’m happy it’s getting a sequel, but I would’ve done it a bit differently.)

So there you go, BOF’ers.  Starting with BIRDS OF PREY this coming February (2020), we’ve got eight unrelated to each other DC films coming our way over the next three years which is pretty cool; including the biggest of ’em all — Matt Reeves’ THE BATMAN on 6/25/21.