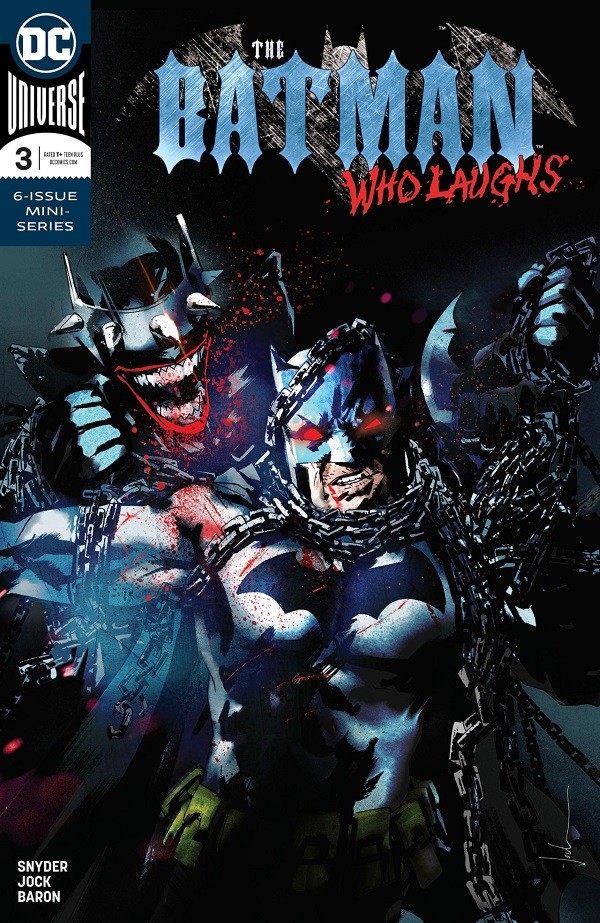 SYNOPSIS: All the pieces are starting to fit together as the Batman Who Laughs acquires another key element in his plan—one that is linked to the founding fathers of Gotham City and to a legacy started by the Wayne family and protected by none other than Oswald Cobblepot. While the Penguin goes head-to-head with the darkest version of his mortal enemy, Batman is forced to compromise his principles and purge the serum that protects his heart from the deadly Joker Toxin! It’s a no-win situation as writer Scott Snyder and artist Jock return to the sociopath they created in “Black Mirror”: James Gordon Jr.

With the synopsis doing such a fantastic job of doing what synopsis’ are supposed to do, I’ll skip to the good stuff.

When I think of all the possibilities when it comes to dark, twisted versions of Batman born from his nightmares, I could not imagine two more intimidating forces of evil than The Batman Who Laughs and The Grim Knight. Working together, they are seemingly unstoppable, even for the true Batman.

Scott Snyder has done a brilliant job of crafting a Batman who is rarely shaken and is always two, three, and four steps ahead throughout his tenure writing the character. Batman always has a contingency for every contingency, and that’s how he wins, even when all hope seems lost. Facing not one, but two twisted versions of himself who have cast aside all moral restraints are finally taking its toll on our hero, and are causing him to question if this is a fight that Batman can win.

We see Batman progressively breaking character, and saying and doing things that he would otherwise never think to do.

Seeking out a healing James Gordon Jr. and asking him to revert to his homicidal self, bringing The Joker into the cave, sacrificing Jim to The Grim Knight, and finally letting the toxin take hold to fight fire with fire are all actions that Batman never would have taken, even when pushed to the brink in arcs like The Court of Owls or Endgame.

In some ways (and some very unsettling ways, at that), Bruce is losing himself. But is that really him making the decisions? How much has The Joker toxin been influencing Batman’s mind? And now that he’s fully embraced the transformation, will he be able to hold to his code?

My only complaint about the story so far is how quickly Batman seemed to let go. We’ve seen him exhaust far more options to defeat his foes in other stories prior to giving in, and his willingness to become what he is fighting seemed to be a bit of a stretch, even despite the effects of the toxin.

The Batman Who Laughs’ plan is still somewhat of a mystery too, as we think we know what he is up to, which means we likely don’t know anything at all.

This issue in itself was definitely the least eventful in the series so far, but I have a feeling it is setting the groundwork for a huge payoff. I doubt it’s a coincidence that the next issue doesn’t come out until mid-April. Fortunately, we have The Grim Knight one-shot to tide us over in mid-March! – Mance Fine

GRADE: B+ (On the Scott Snyder Scale)