BOF’s Review of THE LAST DUEL by Jo Anne Hyde 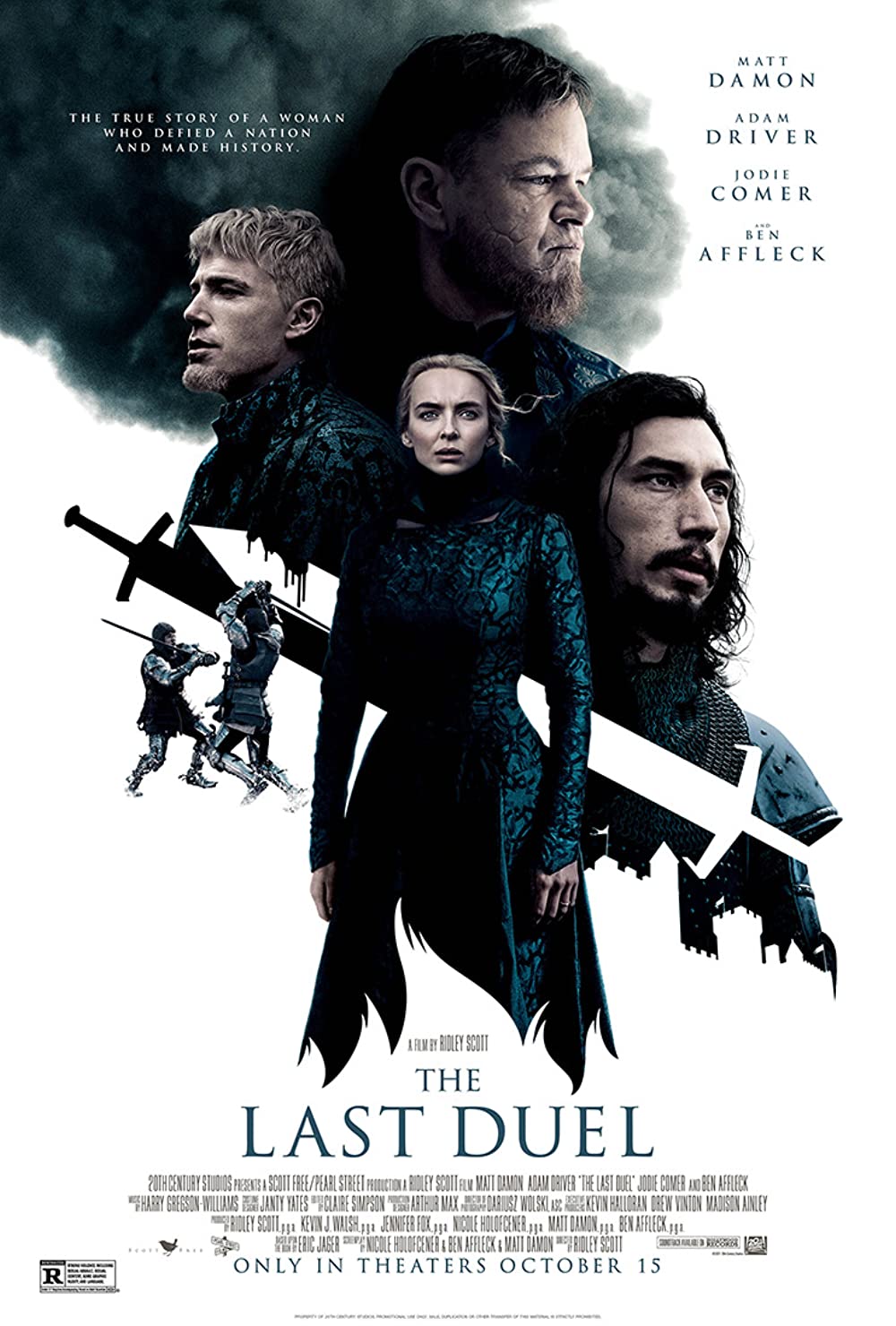 Well, so much for chivalry!

If you have any fantasies about a Camelot-style tale about knights and their fair ladies, The Last Duel should dispel those forthwith. Directed by Ridley Scott and filled with his trademark time period accuracy, you’ll experience France in the mid to late 1300s as an era you’ll be glad you don’t live in. Visually and cinematically, the film is stunning. Otherwise, I have some issues.

Matt Damon and Ben Affleck not only act in the film, but they also wrote the screenplay along with Nicole Holofcener. It’s based on an actual historical event. Matt Damon plays Jean de Carrouges, one of the duelers, and Adam Driver plays the other, Jacques LeGris. The dispute is the alleged rape of Carrouges’s wife, Margueritte de Carrouges, played by a radiant Jodie Comer. Affleck portrays Count Pierre d’Alencon whose district is the scene of the crime. At first, Damon and Affleck were to play the duelers, but as filming began, they decided, rightly, that Driver should play Damon’s opponent. Affleck is better cast as the womanizing, carousing Pierre.

At 2 ½ hours, the story is a bit mind-numbing. I have not read the book it’s based on, so I don’t know whether or not the screenplay reflects the structure of the book. I’m thinking probably not. Although The Last Duel begins with the two knights preparing for the fight, it quickly digresses into 3 “chapters” that recount the incident from 3 points of view: Carrouges’s, LeGris’s, and Margueritte’s. By the third chapter, I was ready for the film to be over, but the main event, the duel, had not yet happened.

During the reign of King Charles VI (Alex Lawther), duels to the death were not yet illegal, but had fallen out of favor. Since rapes were seldom reported and women were never believed at that time, the husband of the victim had to bring the charges. At first, dismissed by Count Pierre because LeGris is his favorite companion in revelry, Jean takes his case to the King. The only entity more powerful than the king was the Church, which ruled that God would favor the truthful combatant and the liar would die. So back to the tournament arena we go.

Like the many battles shown before the actual duel, combat is hand-to-hand, up close and personal and gory with swords and battle-axes sending blood and body parts flying everywhere. So the duel itself is agonizingly realistic as it begins with jousting and ends with both duelers horseless and fighting on foot with whatever weapon they can grab. I will not reveal the winner, but I will say that the duel scene ramps up the tension and finally gets the film where it needs to go.

Jodie Comer delivers the best performance, but Matt Damon is close behind. His middle-aged, battle-scarred, illiterate lout is so far from his own personality that even though his character is not particularly sympathetic, you can’t help but admire him.

Comer, with Margueritte’s account of the incident and its aftermath, manages to convey both the helplessness of the lady of the house forever at the mercy of the lord, and an inner strength suggested as rare at the time. Of the three accounts, hers seems the most likely to be true.

Affleck plays Pierre as an entitled, immoral “bro” in a performance that often seems too contemporary. Mostly, the dialogue sticks to the stilted syntax of the day, but some of Affleck’s lines seem more exemplary of a frat party. Driver and Damon are better at keeping their character’s speech as typical of the time. Comer, however, is the best at inhabiting her role than the other main actors.

If you are a fan of Ridley Scott, as I am, you will enjoy the detail with which he renders a brutal era in a brutal narrative. Using only natural light on the set, the Dark Ages are appropriately dim. Sunlight and candlelight are the only sources of illumination much like his film Gladiator. I appreciated the de-romanticizing of the past for the sake of authenticity, but it often makes for a grim atmosphere.

The Last Duel is more a film you appreciate than one you enjoy. – Jo Anne Hyde

Jo Anne Hyde had been reviewing films for BOF for years and is the site’s senior film critic.