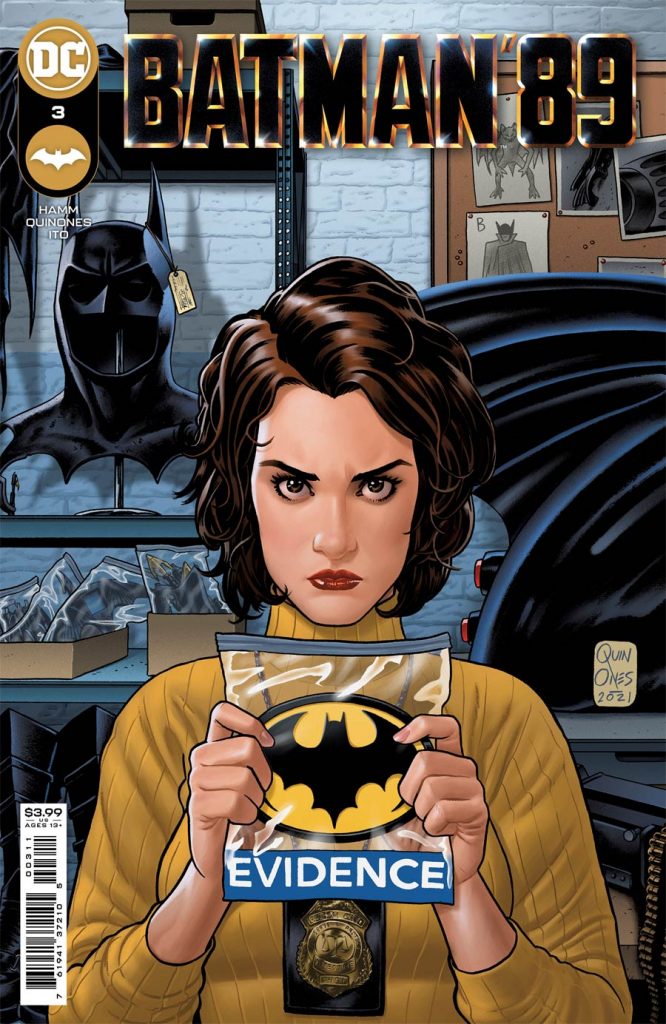 As I began reading BATMAN ’89 #3, I thought writer Sam Hamm pulled a bait-and-switch on the readers.

Issue #2 ended with the event that would turn D.A. Harvey Dent into Two-Face.  However, upon reading the opening pages of issue #3, it seems that not only would Harvey go uninjured in the building fire, but would save the day and be hailed a hero.

Unfortunately for Harvey Dent, there was no bait-and-switch at hand and his fate was, well, his fate.  “Harvey Dent, Hero” was nothing more than a fantasy within the mind of Two-Face.  While the accident that gave birth to Two-Face was part of the previous issue’s story, the story of issue #3 focuses on Dent’s transformation into his villainous alter-ego.

Now that Two-Face is here, it’s going to be interesting to see just what kind of Two-Face the BATMAN ’89 version of Harvey Dent will become.  Does he become a schizophrenic mob boss, a physically damaged man out for revenge, or perhaps a combination of both?

As far as the other happenings of BATMAN ’89 #3, Bruce Wayne is getting a lot of unwanted media attention, Gotham PD is still in hot pursuit of The Batman, and we’re getting closer to seeing Batman take on Robin as his partner.

The artwork from Joe Quinones is on par with his work on the previous 2 issues.  However, I will say that I was quite happy to see Bruce Wayne’s eyes while wearing the cowl as Batman.  I’m not sure why Batman’s eyes have been white, but it looks way better when we actually see the eyes just like we saw Michael Keaton’s in the two Tim Burton BATMAN films.

I’ve been kinda “meh” on BATMAN ’89 so far as it’s been rather uneventful — nothing really knocked my socks off other than its nostalgia.  However, with issue #3, things are starting to come together and the pace is definitely picking up.  With Two-Face now in the fold, I’m looking forward to seeing how it all plays out over the final 3 issues. – Bill “Jett” Ramey

The Best of Bruce Wayne on Film