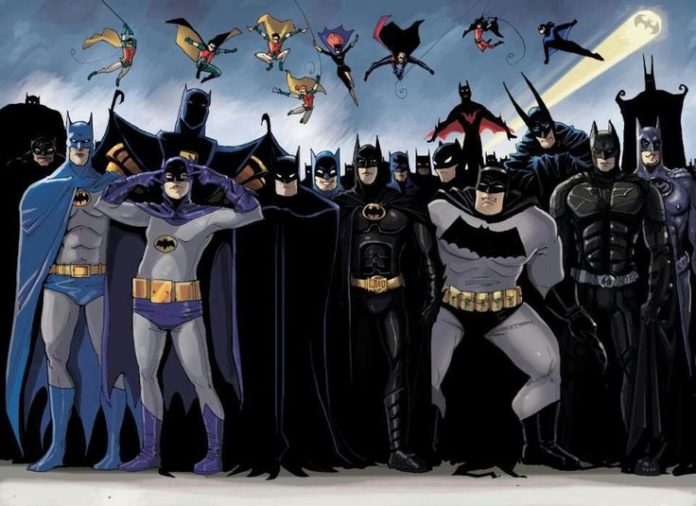 I, like so many others here on BATMAN ON FILM, believe that Batman is the greatest fictional character of all time for a variety of reasons; not least of which is his malleability.

The fact that he works as the “Dark Knight Detective” loner just as well as he does as the colorful “Caped Crusader” is testament to it.

But how can one character not only work — but work well — in so many different iterations, varieties, and flavors?

It’s because when you boil Batman down to his essence and strip away all the fat, the elements that make Batman who the character “is” never change. Keeping the ingredients consistent allows the character to work over a multitude of genres, timelines, and tones and still feel like Batman.

But what are those basic elements?  First and foremost is the origin.

Unfortunately, we don’t get Batman without the Wayne’s being murdered in Crime Alley. It’s the catalyst that turns a rich kid into one of the most selfless characters in all of fiction. According to Frank Miller — who would go on to define the “dark and serious” aesthetic that’s been the default for the character since the one-two punch of THE DARK KNIGHT RETURNS and BATMAN: YEAR ONE…

“[Batman] is not after personal revenge…He’s much bigger than that. He wants the world to be a better place, where a young Bruce Wayne would not be a victim… In a way, he’s out to make himself unnecessary. Batman is the hero who wishes he didn’t exist.”

Miller’s take on the character actually posits Batman as the most hopeful of heroes, it just so happens that he uses the darkness to achieve that hope.  Which brings me to what I believe is the most important aspect of the character: his no-kill rule.

Now, before everybody jumps on me, I’m fully aware and acknowledge that Batman carried a gun and killed until 1940’s BATMAN #4 in which he tells Robin, “we never kill with weapons of any kind.” See, when Batman first debuted in 1939, he was a new character in a new genre and the creators still hadn’t figured him completely out yet (much like Tim Burton working on the ‘89 film). It’s also important to remember that his origin wasn’t introduced until 6 months after his first appearance. So his entire motivation for not carrying weapons or killing wasn’t even a germ of an idea at his inception.

But beyond the technicalities of it all, from a character standpoint, Batman killing simply doesn’t make sense — especially if we take Miller’s words to heart.

Since Batman never wants what happened to him to happen to anyone else, why would he ever take a life and potentially create more “Batmans?” He wants to see these criminals rehabilitated — even The Joker. If he isn’t willing to kill The Joker — the one villain who most deserves death by Batman’s hand — he’s not going to casually kill low-level thugs he could easily take out in non-lethal terms.

Beyond that though, why go through the trouble of mastering the art of criminology and fighting styles if you’re just going to kill the perp anyway? It just makes him The Punisher in a bat costume.

You also have to think that if Batman turned to murder, it would effectively end his work with Jim Gordon and the trust built between the two of them, arguably the most important and symbolic relationship in all of the Batman mythos.

In addition to his origin and his no-kill policy, the other constant is that Batman is always in peak human condition — both mentally and physically. At various times throughout his history he’s studied with the FBI, the CIA, and countless experts in their respective fields — various fighting styles and techniques, escapism, magic, and even acting — and he’s impressed them all. The fact that he knows so many different ways to take a thug down makes the whole no-kill thing quasi-believable if you wanted to go the “realistic” route. He’s a detective and a brawler, Sherlock Holmes and The Shadow rolled into one.

Of course, all of this is made possible by his family’s wealth. Bruce Wayne needs to be wealthy for the tragedy to really work: The boy who had everything suddenly has nothing.

The Wayne fortune not only funds his nocturnal adventures, it also provides Bruce with a humanitarian front, fighting crime even when he’s not in the suit. And while Wayne Manor provides the Batman with his base of operations — The Batcave and all its wonderful toys, including the Batmobile — I would go so far as to argue these additions are not solely integral to the character. They’re fun, to be sure, and they add an element of tech to Batman’s world, but just as we see in GOTHAM BY GASLIGHT and even YEAR ONE, gadgets don’t make Batman who he is.

I don’t expect everyone to agree with my hot take; there are so many different versions of the character and different aspects mean different things to different people. But I truly believe that if you peel away everything else and just have a wealthy guy whose parents are killed when he’s a boy — and that boy decides to dedicate his life to non-lethal crime fighting — you can drop that character into any time or setting or genre or tone and you will have a Batman that still resonates. – Joey Perotti

Joey Perotti is a husband, screenwriter, podcaster, and all around Batman enthusiast. You can follow Joey on Instagram: @TopFive5Pod.

RUMOR: Reeves’ THE BATMAN Rewrite Due Before End of the Year