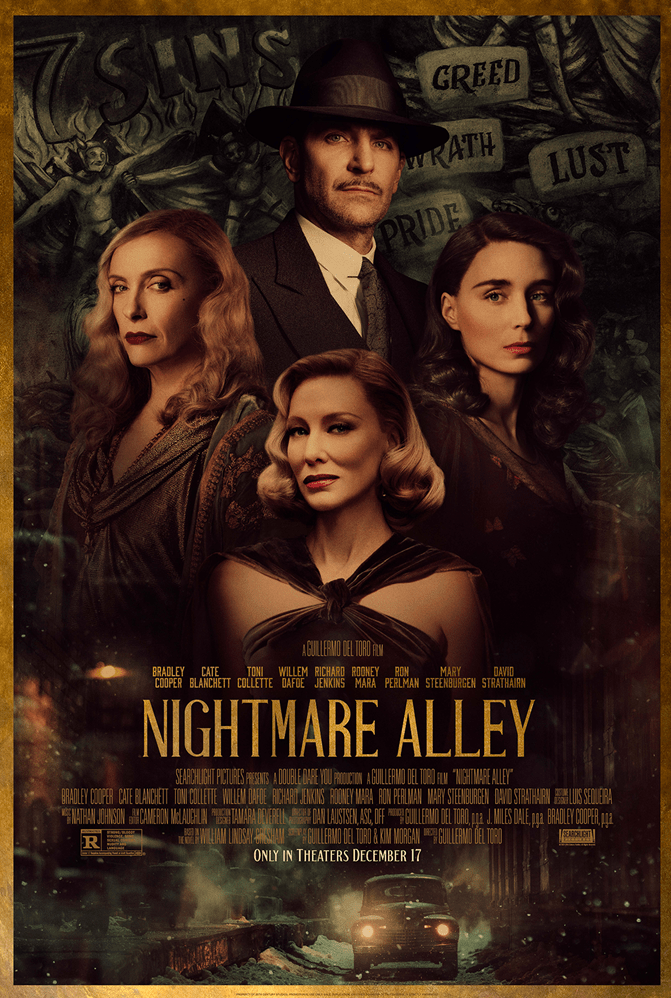 Guillermo del Toro is known for directing films that are quite out of the ordinary, and his latest, Nightmare Alley, is way, way out there. Set just before and immediately after America’s entry into World War II, it’s a homage to the film noir genre of the 1940s and early 1950s. Cinematically, it looks the part with dimly lit interiors, gray skies, and dark, forbidding buildings. Foreshadowing, although heavy-handed at times, permeates the narrative. There’s never any doubt that nothing good will happen.

Bradley Cooper plays Stan Carlisle, a man down on his luck who stumbles onto a seedy carnival and finds he has a knack for manipulating people — a natural-born grifter, you might say. He’s hired by the gaunt, menacing boss Clem Hoatly (Wilhem Dafoe) and immediately begins looking for ways to better his situation

Stan becomes intrigued with the “good girl” of the story, Molly, played by Rooney Mara. She’s closely looked after by Bruno (Ron Perlman), the strong man, and his partner, a little person called The Major, played by Mark Povinelli. Bruno distrusts Stan immediately, but Molly is drawn to him.

Stan’s luck changes when he meets a couple who’ve been quite successful as psychics, Zeena (Toni Collette) and Pete (David Strathairn) Krumbein. She reads Tarot Cards, and he “reads” minds. They’re long past their glory days, but Stan senses there’s something to be learned here – something he might be good at. Pete has a little black book detailing all of his tricks of the trade and begins teaching Stan. Stan can read people intriguingly well and becomes an expert at this particular grift. Pete warns him that the information in the book can be misused, but Stan ignores that warning.

His ambition leads him to ask Molly to run away with him and be his partner for an act that will make them rich. In spite of her misgivings, she agrees. After an unspecified amount of time, we find them in Buffalo, NY, living large in a fancy hotel suite and playing to sold-out audiences every night. But it’s not enough for Stan.

During a show, he meets a beautiful, enigmatic woman, Lilith Ritter (Cate Blanchett) who introduces him to a wealthy and powerful judge who wants a private reading. Stan, intrigued with Lilith, can’t resist the opportunity to score in a big way. In spite of Molly’s misgivings, he agrees. Stan believes that he and Lilith are cut from the same cloth, so he thinks being in league with her is a safe bet. Is she safe or sinister? I’ll leave that for you to discover.

When the judge refers him to a powerful and paranoid man, Ezra Grindle (Richard Jenkins), Stan ignores the warnings he gets from everyone, including Lilith, for the chance to make a truck-load of cash. Grindle is a monster, and for Stan, what follows are unexpected outcomes, rapidly spiraling out of control. Stan’s pride and greed have never permitted a “plan B”, and the outcome is jarring and horrific.

Because of the way the film is structured, the ending won’t be a surprise. It opens with a scene so intense and disturbing that much of what happens next is predictable, and I would say makes the conclusion almost anticlimactic. Symbolism, such as approaching storms, and the repeating motif of an element from the opening scene are overused. Even grisly, macabre events really aren’t surprising since you expect them. A little bit of subtlety would have been welcome.

On the plus side, all performances are masterful, especially the women’s. Cate Blanchett, Toni Collette, and Rooney Mara provide the backbone of the narrative, even though Bradley Cooper is the main character. Cooper’s performance requires him to do much physically-challenging work, and he’s quite good at playing Stan who really doesn’t have a core personality but transforms into whomever he needs to be in any given situation. Blanchett, with icy detachment, provides the perfect blend of charm and perversity to challenge and excite him.

For the most part, Nightmare Alley achieves its intended purpose. Guillermo del Toro could have used a lighter hand to create a more suspenseful narrative. As I said before, from the beginning, you know nothing good will happen. If you’re a del Toro fan, you’ll love the visual consistency of darkness, both literal and metaphorical, he creates in this strikingly disquieting film. – Jo Anne Hyde