SYNOPSIS: From high above the sweltering summer streets of Gotham, Batman planned to escort the GCPD as the dangerous metahuman super-villain known as E.M.P. was transferred from a holding cell to his permanent home at Blackgate Prison. E.M.P.’s electrical powers posed a threat, but the situation was in hand — until it wasn’t. Now every light in Gotham is out, the police are in disarray, and a broken, bleeding Batman must fight his way to Blackgate, block by block, dragging E.M.P. behind him. But the dark corners of Gotham hold many surprises…and E.M.P. has many more shocks to deliver before the night is through! One of the most iconic Batman artists of the 21st century, the incomparable Jock (The Batman Who Laughs, Batman: The Black Mirror), has focused all his storytelling powers on the tale of one very, very dark night in Gotham City. It’s always darkest before the dawn-if it ever comes… 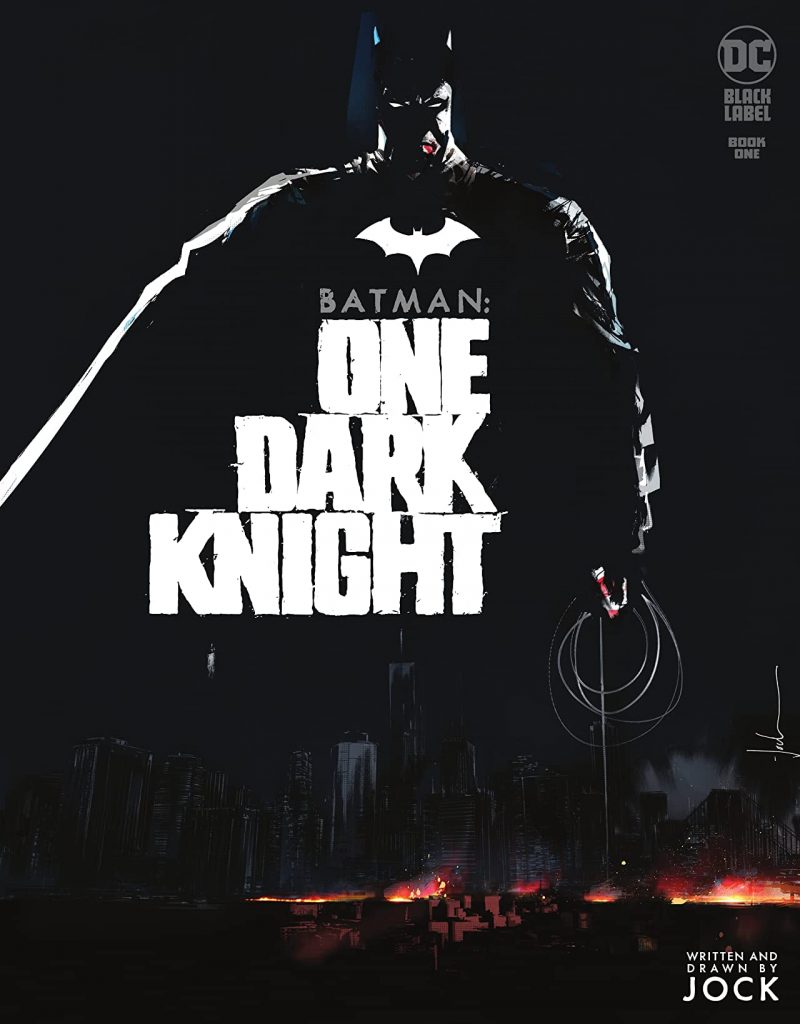 Jock has always had a gritty, edgy style, so what better way to begin his Bat opus than at literally ground level with an opening splash page focusing on a discarded newspaper proclaiming soaring temperatures? Petty crime is rising and as the camera pans up, we see Jock’s vision of Gotham, a bustling, dirty metropolis, with its silent guardian flying overhead via Bat Plane. Jock makes excellent use of the oversized format with a sprawling two-page spread of the Gotham cityscape. This is an image made to be held in your hands to appreciate its grandeur!

Jock doesn’t waste any time establishing the particulars. It’s Monday, 7:42 PM, and The Batman is in position to monitor the transfer of the villain, E.M.P., from his cell at Arkham Asylum to Blackgate Prison. Jock presents a classic version of The Dark Knight’s world, outside of current continuity, with mainstays Alfred and Gordon firmly in their traditional roles. Batman is even adorned with his blue cape and cowl, adding to the throwback aesthetic, despite not having his classic yellow oval. It all adds up to a timeless feel, making it accessible for an audience that may not follow the Caped Crusader weekly.

Longtime readers will remember the 1999 epic crossover, Batman: No Man’s Land, which included a map of Gotham. This map would get updated as the story progressed, showing what factions controlled which portions of the city. Jock does something similar here, highlighting the neighborhoods, updating Batman’s route and the opposition moving in, adding a level of danger as you see The Dark Knight’s foes closing in on their target.

You never know how it’s going to go when an artist tries their hand at writing, but I found this issue to be very well paced with dialogue sounding in character. Several times Jock features the time up in the corner, adding to the story’s tempo. Taking place over a taut 79 minutes, the story flew by as I read it, in a good way. You know Jock is telling his tale exactly as he wants to. Every splash page, be it across one or two pages, has the desired impact it needs to have, reflecting the majesty of the imagery.

I’ve been a fan of Jock’s for quite some time and I’ve been eagerly anticipating this release. His Batman as seen within is obviously done in his own inimitable style, but I get shades of influence from Miller and McFarlane here and there. His Batman is a powerhouse whose cape stretches out across the night sky as he leaps after his prey.

The amazing visuals are highlighted impeccably by the coloring, which Jock also provides. Careful detail is placed as the Gotham sky fades from sunset to the night, explosions rock the page with their fiery oranges and reds, and a sickly green emanates when Batman encounters E.M.P. Gotham feels more gritty and real thanks to the colors.

Book One of Batman: One Dark Knight feels like the first act of a summer action blockbuster. If One Dark Knight is Die Hard, then all of Gotham is Nakatomi Plaza and Batman is John McClane. Jock keeps the story moving and filled with tension as political and criminal forces combine to lock the Caped Crusader in a harrowing gauntlet that promises to only escalate from here! Strap in! This ride is just getting started! – Javier E. Trujillo