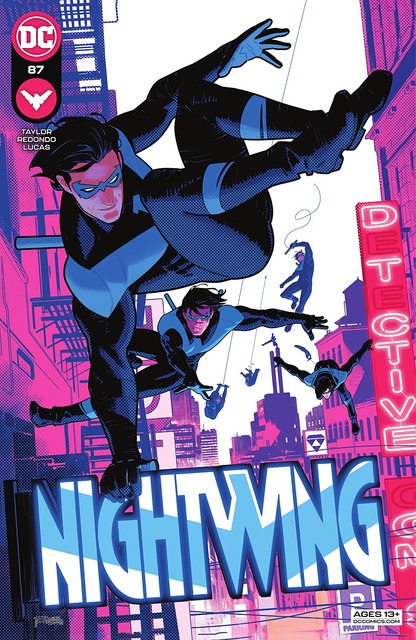 I’ve been looking forward to this issue since it was announced.

A comic book story told as one continuous image immediately sounded like an artist’s dream, a real treat for readers, and a potential project for people who like custom framing. I’ll be attempting to buy three copies of NIGHTWING #87 for just that reason.

This issue is definitely worth the wait. It’s cool to look at as you take time to study the backgrounds searching for Easters eggs. The story, following Nightwing as he chases the men who kidnapped his dog Haley and/or Bitewing, is universal as anybody with a soul loves a pet.

The whole thing felt like watching a Super Mario Bros gameplay out. In fact, Warner Bros. Animation will be missing out if they didn’t make this into a short side-scrolling cartoon!

After a couple of reads, I spotted Easter eggs like the Mystery Machine from SCOOBY-DOO, a David Bowie and AQUA TEEN HUNGER FORCE reference, and a couple of shoutouts to the BLM and LGBTQ movements. I’m sure there are plenty more!

There’s also a moment where a citizen of Bludhaven helps out Nightwing that flips the script on that scene you’d see at the movies where the hero needs a new ride. That put the biggest smile on my face as I read.

On social media Tom Taylor has always called this Nightwing run a team effort, making sure artist Bruno Redondo and colorist Adriano Lucas get equal praise for these issues and rejected labeling this “Tom Taylor run” on the character.

In that spirit, I’ve yet to give a shoutout to letterer Wes Abbott in my reviews and I feel bad about that. But here the first thing that caught my attention was his work. The opening credits to this issue stood out for some reason and I went back to look at them again when I was done reading the first time.

Sure enough, the lettering is the same credit font/color that was used on popular sitcoms like THE BOB NEWHART SHOW and CHEERS. As someone who grew up on Nick at Nite, I dig that a lot.

There’s not much more I can say about the issue without being redundant. Taylor, Redondo, Lucas, and Abbott have given us a good one, go get it! – James Armstrong 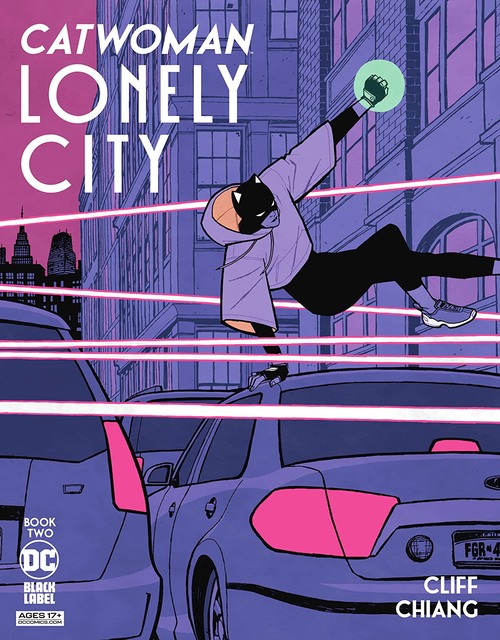 After a stunning debut, quadruple threat Cliff Chiang is back with the next chapter of his epic!

Starting off ten years ago during the inciting incident of Fool’s Night, The Joker is unleashing his plan upon Gotham. It feels like Chiang is pulling influences from every era and iteration of Batman in the flashbacks of this chapter. Echoes from Batman: The Animated Series, Joker, Batman (1989), and even Batman (1966) come together and mix to form a new cocktail of excitement!

It’s worth pointing out that there are similarities between Lonely City and its contemporary series, Batman/Catwoman. Both are Black Label, star Selina Kyle, have flashbacks, and feature the world of Gotham in its future, with an aging cast to match.

As much as I enjoy Batman/Catwoman, it doesn’t have the unique vision of Cliff Chiang. Despite the tragic events that put this story in motion, there is a sense of fun being had on every page. Perhaps it’s Chiang’s enthusiasm for the project seeping through, but there is a lightness in tone, in the colors, that makes Gotham seem exciting, despite the socio-economic turmoil facing its residents.

This Selina is a leader, inspiring her crew and bringing them together, not descending further into villainy and ostracising (or murdering) everyone she once knew, worked with, and even loved. When Batman and Catwoman encounter each other in a 1966 tv series-inspired moment, there is a playfulness absent from Bruce and Selina’s story in Bat/Cat. Chiang also takes great pains to acknowledge past looks for the Feline Fatale, with several characters admitting to having various posters of Selina up in their room back in the day! So much of this book is a loving tribute to the character and her rich, 80 year history.

It’s not all fun and games, though. Selina has a mystery (riddle?) to solve and a past she can’t run from. Her physicality also isn’t what it used to be. (Nor is anyone else’s, for that matter.) Working alongside the next generation, like Riddler’s daughter, makes Selina question if she was ever that good. Chiang really gets into her head and reveals her self-doubt, which is in sharp contrast to how the world views her as a badass. This serves to humanize her and makes you root for her as she tries to pull off a heist with her new crew.

Speaking of the cast of supporting characters, I adore how Chiang has reenvisioned The Riddler and Poison Ivy! Of course, Riddler was coked up back in the day! It also makes total sense for Ivy to take her affinity for plant life and turn it into the most powerful coffee empire ever and use the profits to make a real ecological change! There is a genuine camaraderie between Catwoman, Croc, Riddler, and Ivy that I don’t think we’ve really seen in quite this way before and it added to my enjoyment immensely!

Catwoman: Lonely City, Book Two feels like a love letter to the DCU as a whole (check out those threads made by OGBeast that everyone is sporting!) and to Selina Kyle in particular. Chiang has made a Gotham City that is inspired by not just the comics (Hello, Rob & Don as Bat-Cops), but by real-world issues as well, creating a story that is as much Ocean’s 11 as it is a quest for personal redemption and growth. It wears its heart on its sleeve and is a joy to read and discover this new take on Gotham and her residents from cover to cover! – Javier E. Trujillo

After AQUAMAN: The “DCEU” Ranked

GOTHAM: The Batman is Coming