SYNOPSIS: “The Tower” part two! The mysteries of Dr. Wear begin to unfold as a new doctor named Frow joins the staff of Arkham Tower. The Bat-Family tries to figure out the best way to infiltrate the facility, but someone may have gotten the drop on them…someone not unfamiliar with psychiatric facilities…one Dr. Harleen Quinzel, better known to you dear readers as Harley Quinn! Backup: “House of Gotham” part two! A boy’s parents were killed by The Joker, and he fell through the cracks of the system. Instead of being sent to a facility that could care for him and his trauma, he was sent to Arkham Asylum! Will the villains inside eat him alive or show him how to survive in a city ruthlessly overseen by Batman? 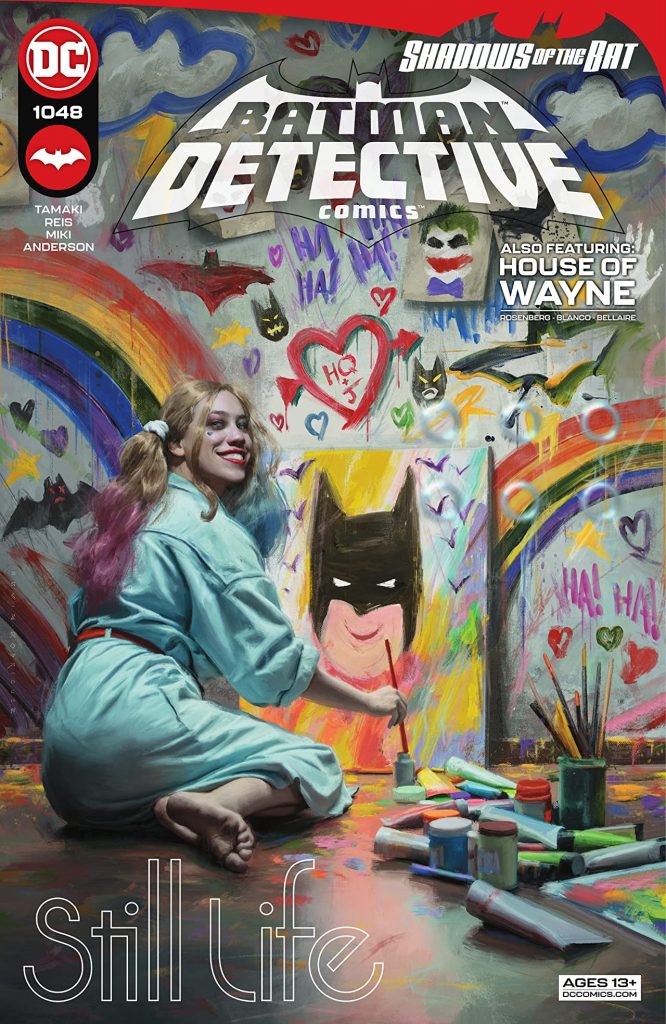 OK, let’s get into a quick recap.  DC Comics is doing a 12-issue mega-event by Tamaki in the pages of Detective Comics.  Batman is out of Gotham, and the sidekicks are stepping up.  It’s a three-way battle royal between local government, the “freaks,” and the vigilantes for the most dominant force in the city.  Let’s dive into it!  Can Tamaki write a Detective story without the world’s greatest detective?

Tamaki writes the story teasing the reader from the inside out.  There are characters that we know little about, but it seems they are the focal point of this story.  Tamaki, as usual, leads us with breadcrumbs that we need to follow.  What we are following is an exposition-heavy tale.  We are digging deep into Tobias Wear, a big-time doctor in Gotham, basically the Jeremiah Arkham of “the Tower.”  Wear beat the odds as a child and paid for it with everything he had, right to the top of the Gotham skyline, but is he all that he seems?  I appreciate the team aspect with Oracle and Batwoman undercover, the base of operations back in the sewer; it’s just that the story is a bit boring.   The book tends to feel long as you churn through all of Tamaki’s details.  Some eye candy could have gone a long way in this book.

Ivan Reis again graces the pages of Detective with his pencils, but this issue doesn’t put his talents to good use.  While one of the most well-drawn books you can pick up this week, there isn’t much showcase.   There is a fantastic Batman/Mr. Freeze splash page, some good horror panels, but nothing jaw-dropping.

Rosenberg’s backup story started gangbusters then took “the turn.”  The book opens with a great early on Bruce/Alfred interaction.  A beautiful vintage moment that all Bat-fans will enjoy, then the tale takes a quick emotional turn.  At times, it seems to be too similar to the primary story.  A dark, grim tale about a young boy in Gotham who will fight for the rest of his childhood.  After last week’s introduction, you knew this would be a wild ride; but you didn’t think you would be reading the same story twice, in the same issue.

So far, a week in, and we can tell this will be a slow burn.  Tamaki will slowly craft this tale and squeeze out every detail she can from these characters.   I’m curious to see how this tale, when it’s finished, will compare to Tynion’s Bat-family book in Detective.  Some action panels really could have helped the book grade-wise.  This issue is very dense, so be prepared to read and re-read.  If you told me you didn’t pick this issue up this week, I couldn’t be mad at you for it.