SYNOPSIS: To reconcile his trauma and move toward an optimistic future, Dick Grayson must first confront his tragic past. Unfortunately, that step includes a confrontation with an enraged Killer Croc, who is out for Grayson blood! This action-packed issue concludes the epic tale of a young man learning to live and love in a nightmarish world. 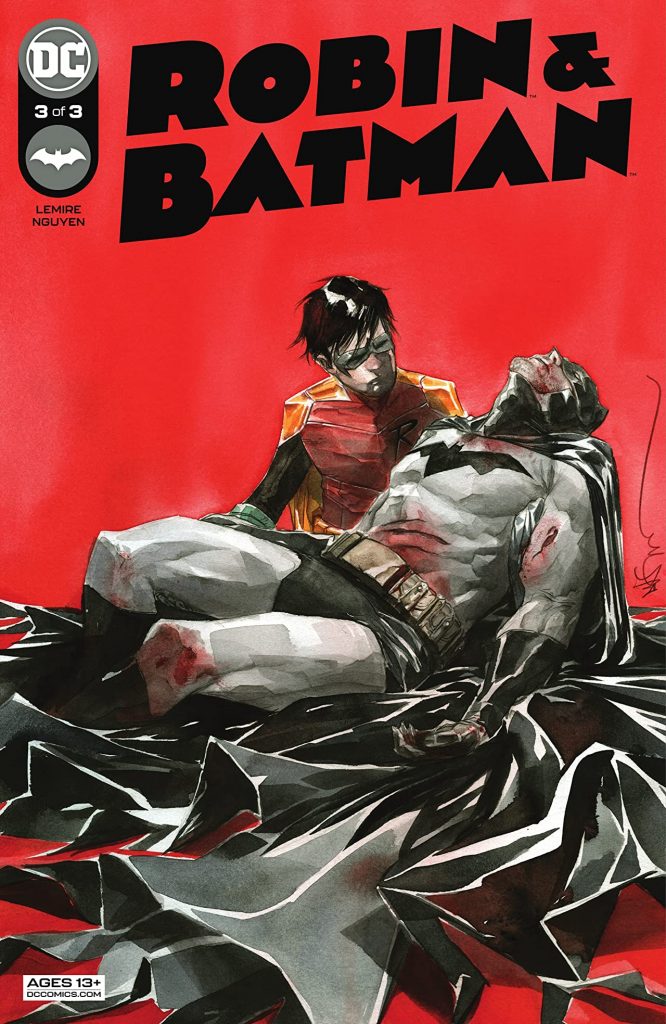 ROBIN AND BATMAN has reached its climax as Jeff Lemire and Dustin Nguyen’s miniseries ends about as quickly as it began. Will there be enough closure to feel like a complete story? Will Batman stop behaving like a total ass? Will Dick Grayson prove himself to be a worthy hero in his own right?

The answer to all of these questions is (mostly) yes! The Killer Croc case that’s developed over the first two issues comes crashing home as the rogue tracks down The Boy Wonder during school hours at Gotham Academy—and appears to know who he is. Yes, it turns out that Waylon Jones and Dick Grayson have a certain circus in common, and one of them doesn’t remember that time as fondly as the other.

With the school in chaos, all seems on the upswing with Batman arriving on the scene…but ultimately, it will be Robin’s actions that determine how the chips will fall.

Dick Grayson is, and will always be, the most well-known hero to be called “Robin”…but the fact of the matter is that Batman’s original teen sidekick grew into his adult identity of Nightwing before many of his current fans were even born. This being the case, it’s always fun to see a new “flashback story” taking us into the dawn of the dynamic duo through a modern lens.

Jeff Lemire has done an admirable job getting inside young Grayson’s head over these three issues. This isn’t the adult Nightwing fans have been reading for decades, but someone who has the potential to someday become that person. Central to Dick’s internal conflict is who he and Bruce Wayne are as people—and what parts of Bruce’s approach are the most worth incorporating into Dick’s personal ethos.

On this end, Lemire finally gives us a Bruce Wayne worth rooting for with this chapter. While he was previously depicted as cold, harsh, and borderline sociopathic; Lemire’s Dark Knight takes a big turn toward the heroic: putting the needs of others first, even behaving like a father for a moment or two. It’s a development that shouldn’t feel like such a relief, but I’m glad it happened here instead of not at all.

From a story perspective, the biggest thing ROBIN AND BATMAN has running against it is the number of issues. The creative team did have access to a higher page count than the standard comic, which certainly helped them turn in more dynamic chapters with plenty of depth as well as action. However, it still ends up feeling rushed…like it could have been expanded to maybe 5 or 6 issues and moved more organically (while introducing additional plot points). Or perhaps if we hadn’t taken the Teen Titans detour in the second issue and focused completely on Gotham?

It’s hard for me to talk about Dustin Nguyen’s art without getting redundant at this point. He’s still an artist working on his own level, with visuals that look entirely his own. Nguyen’s work may not be appreciated by everyone for what it is, but those who take the time to really digest it will no doubt sense the feeling and personality that he puts onto the page.

Ultimately, ROBIN AND BATMAN was a fast and fun detour from present-day Gotham stories. Fans that prefer Batman solo tales might sit this one out—but fans of Robin, Nightwing, the Teen Titans, Jeff Lemire, or Dustin Nguyen will all likely find something to enjoy with it. – Bobby Barrett