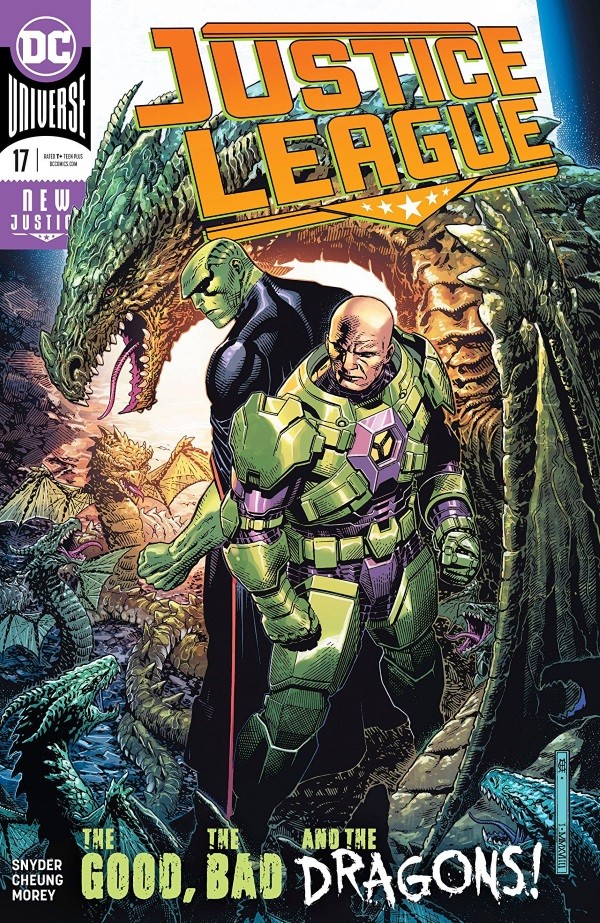 SYNOPSIS: After the disastrous events of the Justice League Annual, Martian Manhunter decides to take matters into his own hands and negotiate a peace with Legion of Doom leader Lex Luthor. Traveling to a distant moon, the two enemies face their intertwined pasts in a showdown for the fate of the Multiverse. However, before either of them can lay claim to the power of the Source Wall once and for all, an unexpected threat forces them to unite…or risk death at the ends of the cosmos.

Justice League #17 is something to behold and I don’t think it’s a coincidence that the issue features the return of Scott Snyder to full writing duties.

I don’t say the as a slight to James Tynion IV who has been Snyders partner in storytelling, handling the actual writing duties of the past several issues while Snyder crafts the overall tale. It is an acknowledgment of how finely tuned Snyder’s writing is and how adept he is at giving the reader something they aren’t expecting.

This issue serves as a very particular and specific story inside the larger narrative. It largely relies on two characters, Martian Manhunter and Lex Luthor. The two are on Mars, for reasons that aren’t explained, with Martian Manhunter bringing Lex to an ancient sacred site and the two surrounded by vicious beasts called the “Quonars” about to attack.

Snyder continues his tradition on this book of working within the present and flashbacks. Here we flip between Martian Manhunter’s childhood, both on Mars and on Earth.

Yes, his childhood on Earth.

The events of Justice League Annual #1 left J’onn with memories that were previously unknown to him, memories of a time that he was taken from Mars as a child and held captive by a group looking to harness his DNA for an undisclosed plan.

We see him connect with and make friends with a young boy who is also being held at the same facility. Through their psychic connection, the two go on adventures together in their shared mental space, defending others like themselves with abilities from those who would hurt them. The two are each other’s solace from a grim future of testing and captivity.

In the present on Mars, J’onn and Luthor discuss an ancient ritual of prayer and the sacrifice of hurtful and regretful memories to the Quonars who would feed on the negative energy and be held at bay.

Manhunter has brought Luthor to the site to hear him offer up his memory, through the chanting of the word “Sh’anne.” As the beasts grow nearer Luthor begins to lose patience until J’onn reveals the details of his painful memory, something he says is important for Lex to understand before he continues in his plan to unleash Perpetua.

More details and specifics on Perpetua, the “mechanism” behind the Source Wall’s destruction, and the powers that existed before the known Multiverse are not delivered here, and that would be the one criticism I have of the story. However, the big reveal of the story is pretty amazing and leaves big implications for all involved.

It’s something that you need to read for yourself.

Without giving too much more away, I’ll say that Snyder has done a very nice job employing symmetry to build this story of two sets of characters escaping from dangerous situations through the power of their minds. Both the dialogue and action are engrossing and satisfying.

Art duties are handled by Jim Cheung and the pencils are quite strong. Cheung displays the breadth of his skillset in quiet and personal moments as well as big chase scene action. Framing and paneling are strong and he knows when to go intricate and repetitive with his pacing and when a powerful splash page is needed.

One minor criticism might have to do more with the inking choices by Walden Wong which accentuate some unnecessary thatching that doesn’t add much to the overall texture or shading, but it doesn’t detract from the work.

Overall, Justice League #17 is a must read and a strong entry into the New Justice storyline. The big payoffs are yet to come, but it’s fun watching this team do the leg work to get there.

Slight deduction for an opening without an explained backstory and continued “inconsistencies” with Perpetual. – Garret Grev

Review – INJUSTICE VS. MASTERS OF THE UNIVERSE by Garrett Grev