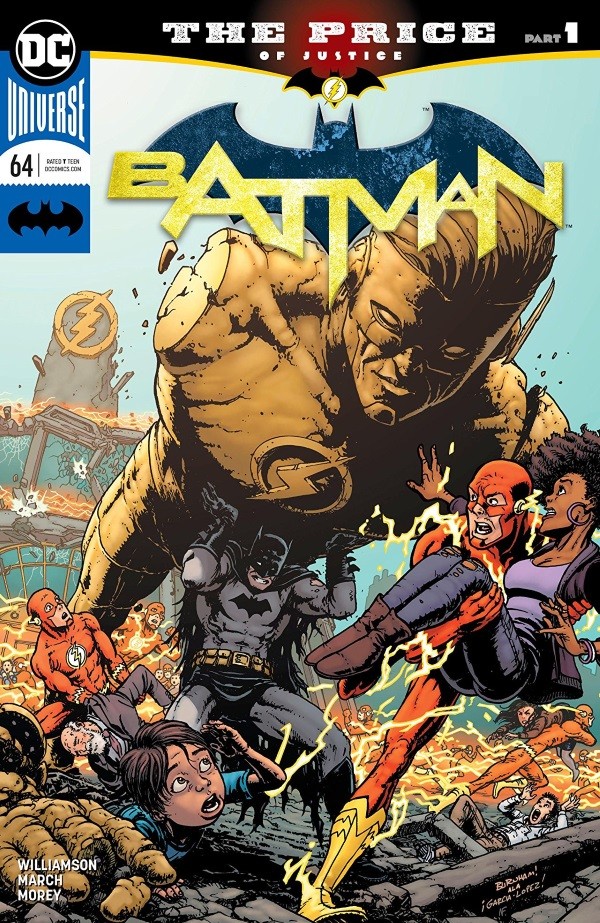 SYNOPSIS: “THE PRICE OF JUSTICE” part one! The two greatest detectives in the DC Universe take on the one cold case that will tear them apart!

As chief architect of the Sanctuary program that cost so much for so many, especially Wally West, Batman will be held accountable…by the Flash!

A cold case from the Justice League’s past has mysteriously re-opened, and Batman and the Flash-the only two heroes who stand a chance of cracking the case-are at each other’s throats! Our heroes must combat a demon from the past while burying their own inner demons in the process…and neither the World’s Greatest Detective nor the Fastest Man Alive will ever be the same again! But who is really pulling the strings here? And how does Gotham Girl fit into all this? Friendships will be tested and blood will be spilled in this titanic crossover event…

Back in November, Tom King announced on Twitter that he’d be taking a two-issue break from “Knightmares” to work on “secret TV stuff,” and that THE FLASH scribe Joshua Williamson would write a four-issue Batman/Flash crossover event to fill in the gap. What begins in today’s BATMAN #64 continues in THE FLASH #64 on February 13th and BATMAN #65 on February 20th before concluding in THE FLASH #65 on February 27th. It’s called “The Price,” and Williamson claims it teases the future of the DCU. “Knightmares” resumes March 6th.

Before I talk about the issue, I have to heap some serious respect on all of these writers and artists who are cranking out two (or in some cases, many more) issues’ worth of material each month. New installments are arriving so consistently and quickly that it’s almost difficult to remember a time when we were only getting one new issue of our favorite book per month. Bravo to all involved, and please keep it coming.

King and Williamson previously teamed for “The Button,” a story (in issues 21 and 22 of both BATMAN and THE FLASH) that found DC’s greatest detectives investigating a certain blood-covered smiley-face button that mysteriously appeared in the Batcave. “The Price” happens prior to “Knightmares” and in the middle of King’s HEROES IN CRISIS series (with frequent BATMAN collaborator Clay Mann), in which tragedy and death strike a “Sanctuary” for heroes in need of respite from the physical, mental, and emotional rigors of saving the world. Given the hero Batman’s performing an autopsy on the first page here, it’ll make sense throughout the issue why Barry Allen is significantly less eager to partner with Bruce Wayne than he was the last time.

The action quickly shifts to Oolong Island, where the Justice League battles a batch of Amazo prototypes geared to mimic each member specifically. Something feels off to Batman, who takes off in a hurry as soon as the threat’s been dispatched. But when Flash ditches the crew, too, it’s obvious something’s up. One man consumed by guilt, the other buried by grief, and “too many mysteries” abound.

In the aftermath of a caped assailant’s attack on the Flash Museum in Central City, Barry demands to know why Batman was first on the scene. What does he know? The answer ties in to what Batman’s dealing with since the first appearance of Bane’s basement cabal in #50, goes all the way back to the #1 of King’s run, and might even shed some light on “Knightmares” (which, again, hasn’t happened yet when “The Price” begins). It’s really good.

The Sanctuary in HEROES IN CRISIS gives heroes a place to talk to themselves; seeing the tension between Bruce and Barry (that surprisingly comes almost entirely from Barry) suggests they really need to be talking to each other. But things are never so easy in a world that moves this fast; if the final page is any indication, the situation’s about to get a whole lot more complicated, and this first chapter ends on a solid hook.

Guillem March’s art is awesome throughout. On page one, you can sense the pressure Batman respectfully, but firmly places on the chest he’s about to cut into with a left hand deftly poised for a fluid and precise slice. Energy and emotion are palpable throughout, from Wonder Woman’s foreground fury in the Amazo battle to the weariness that clings to Batman’s sharp edges. When the Justice League says they’re exhausted, you can see it. When Flash admonishes Batman, you can feel it. And it hurts. Tomeu Morey’s palette is colorful and capable; I love how Batman seems to absorb the light around him as he stalks through the rubble of the brightly colored Flash Museum. I’ve been familiar with (and a fan of) March’s work since GOTHAM CITY SIRENS, and this is seriously the best single issue I’ve ever seen him draw. Morey’s colors really bring these pages together.

It’s always a bummer to have a story as crazy as “Knightmares” punctuated by a detour such as this one, especially when that detour involves buying two issues of another book that some of us might not be reading. We’re invested in “Knightmares,” and we want to know how it resolves, where it goes next, and how it plays into Bane’s big plan to break The Bat yet again. But Williamson and March deliver such a strong start to “The Price” that I didn’t even mind, and I hope you like it as much as I do. – John Bierly