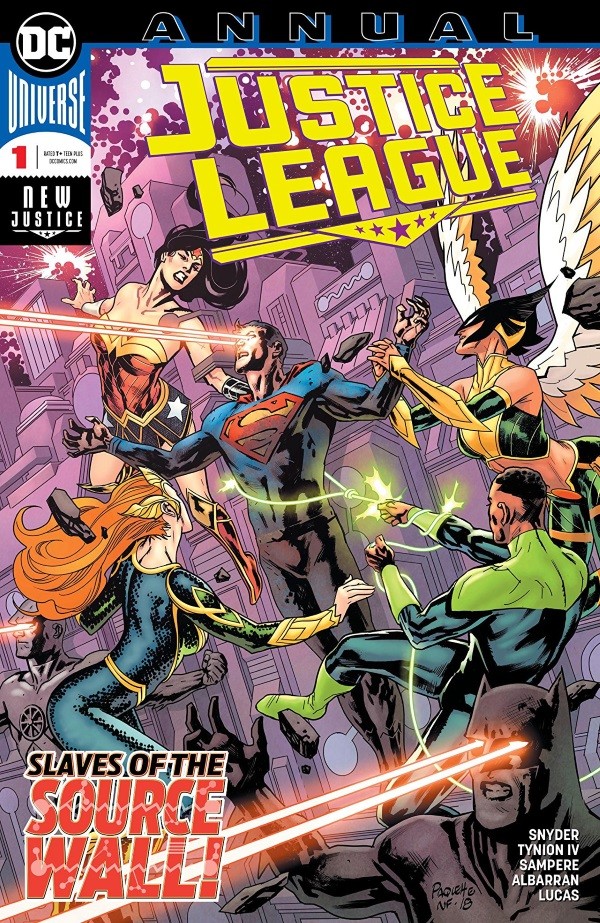 SYNOPSIS: The Source Wall has degraded too much, and the League must patch the hole right now or the whole Multiverse will collapse! Our heroes scramble for a solution and turn to the only thing that might work: the Omega Titans! The only problem? They killed the Entropy Titan back in JUSTICE LEAGUE: NO JUSTICE. Whoops…but never fear! Kyle Rayner, Miss Martian and Steel—from the non-planet-eating Titans team—guest-star with a plan to create a new Entropy Titan…one that’s so crazy it just might work

So, I really wasn’t planning on covering Justice League Annual #1. As I’m sure most of you all know, comic book annuals are usually supplemental stories, not directly tied to the main storyline of the book, and often contain short one-off stories or pin-up pages.

This is not one of those annuals.

In fact, if you plan on sitting this issue out and have any clue what’s going on with the larger “New Justice,” you’re in for a world of confusion. Never fear, dear readers; if you must read it, then I must review it!

Justice League Annual #1 is a direct follow up to Justice League #16 and the continuation of the “Escape from Thangar Prime” storyline.  The Justice League, with expanded participants, is being led by Starman to the Source Wall. Joining them are the Green Lantern Corps, the New Gods, and Shayera Hol along with the last of the Thangar Prime fleet. The combined forces have worked to gather the Omega Titans, the only beings that can heal the Source Wall and prevent the undoing of the Multiverse at the hands of Perpetua.

I sang the high praises of Justice League #16 and, unfortunately, the annual is a bit of a regression. Scott Snyder and James Tynion IV again handle the story duties, but the writing is not as strong in this issue. The story is solid and moves the overall narrative forward in a rather large leap, however, the words leave a bit to be desired. Tynion is a more than capable writer and can often handle a bit of grandiosity, but in this issue, the narration gets a little out of hand. What is meant to be poetic and powerful frays at the edges, particularly in the introductory pages. The words all sound good and have a rhyming nature to them without actually rhyming, but their purpose can be a bit muddied and contradictory. Perhaps that’s that point, however, as Tynion writes himself that the Source Wall is the place “where all things lose perspective.” Some simplified language would go a long way in telling a very complicated story.

From a story perspective, the structure of the books flips back and forth from the present action at the Source Wall with the combined heroic forces battling the Legion of Doom and Braniac (yes Braniac…HE’S BACK!) and two weeks prior. The flashback scenes have the heavy lifting of exposition and filling in the gaps of the plans for each team. Sadly, they also serve to break up the continuity of the issue’s story while leaving some unanswered questions remaining. It feels like the series would have been better served with an additional issue to flesh out these points between #16 and Annual #1.

The story is still strong enough overall to stay engaging with a full cast of characters working together and at odds with one another, the introduction of new concepts, and the continued focus on “lesser” characters such as Hawkgirl (playing an essential role), Martian Manhunter, and Starman. Without giving too much away, the emergence of Perpetua ensures that this storyline is kicking even further into high gear.

Speaking of Perpetua, I can’t wait to see what is in store for this character. The issue delivers more questions than answers, and while I’m not ready to call them plot holes or inconsistencies, I’m hopeful that the team clarifies the essence of her existence sooner than later. Is Perpetua the creator of the Multiverse or the creator of the existence that pre-dates the multiverse? She’s referred to as both. Is she a larger-than-life, all-powerful being, or one that can be contained in some sort of catatonic state in the Legion of Doom headquarters? Is she actively bringing about the end of the universe or is it simply a reaction to her being freed from her prison? Or was she asleep within the Source Wall?

The art in the book is handled well, if unspectacularly. Daniel Sampere provides the pencils in a solid effort, depicting a multitude of characters in other-worldly environments. The framing and page layouts are strong, and the action is easy to follow despite the complicated storyline. However, it would be difficult for me to say that the art stands out from other pencilers and I prefer the previous issues’ combined efforts of Cheung and Segovia. Certain character shots feel as though the perspective is a bit distorted (one panel including Superman, Batman, and Mera stands out) but the work as a whole is good.

Overall, Justice League Annual #1 is a solid book that doesn’t reach the heights of the series best efforts but is more than deserving of your attention due to a compelling (if slightly disjointed) storyline. The artwork is quite good but falls short of great. – Garret Grev