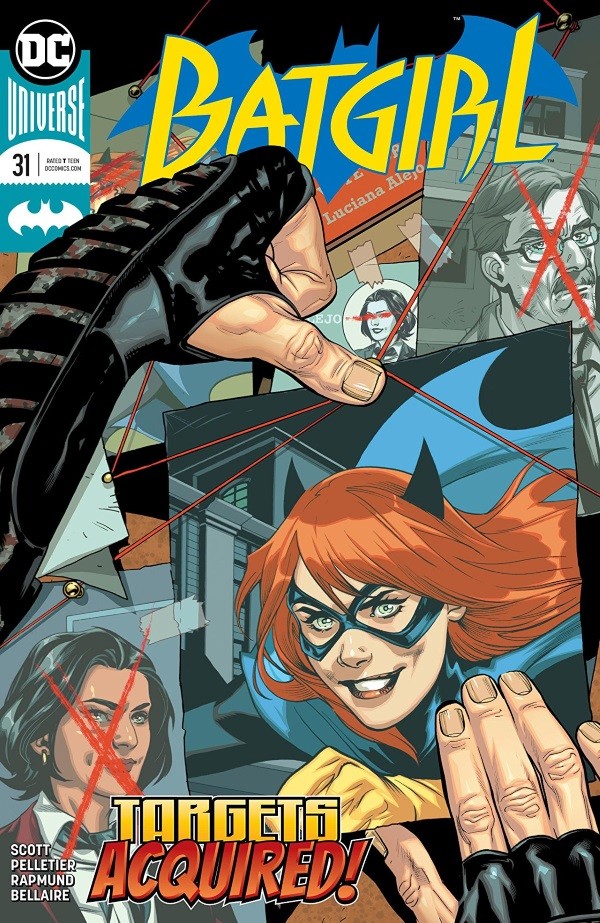 SYNOPSIS: In this issue, it’s Batgirl for Congress! Plus, masked assassins and awkward exes! Barbara Gordon volunteers to campaign for an up-and-coming reformer candidate who wants to take on the GCPD. That puts Barbara in a tough spot against her father—police commissioner James Gordon. And just when things couldn’t get any more awkward, a former flame reenters Barbara’s life. Personal angst and a masked super-villain hunting a mystery target. It’s gonna be a long day, Babs.

OK, so I pulled that synopsis from the DC webpage for this issue, but it doesn’t seem to actually describe what happens in these pages. The “former flame” must be referring to Jason Bard, but he entered the story last issue and there was no mention of a previous relationship with Barbara. I’m thinking they must have put up this synopsis before this issue’s script was actually finished.

The action starts with Batgirl fighting some… snot man in an alley. Like, he’s a man covered in snot, or consistently oozing snot, or perhaps made of snot – it’s unclear. And only made more strange by the facts that we get no explanation of who this is or how he came to be, he doesn’t seem to have any connection to anything else going on in the story, and there’s nothing else really supernatural or sci-fi in this issue. But hey, what comic can’t be improved with a good old fashioned snot-man fight?

Batgirl is still wearing her new, Sean Murphy-designed costume with that mysterious yellow backpack. In this month’s edition of “What’s in my bag?”: I’m going with…corned beef on rye bread with cabbage, tomatoes, mayo, and spicy mustard. It’s a not-quite Reuben sandwich. It’s a Greuben.

After tensions build at the campaign offices, Batgirl stakes out a fundraiser being held for candidate Luciana Alejo at…Chateau Bourgeoisie? That’s a bit on-the-nose, don’t you think? Before too long, Batgirls spots Cormorant, the hired assassin teased at the end of the last issue. Before he’s able to get off a clean shot, Batgirl pulls out a handgun that fires little gold coins at him.

A knock-down, drag-out fight ensues, with Babs both taking and dishing out a pretty nasty beating. She does come away with a blood sample though and quickly identifies the assassin back at her clock tower HQ. Some more investigation into who’s behind all of this leads to another violent encounter with Cormorant and Alejo’s rival, Branson Moore, seemingly crossed off the list of suspects. While interrogating Moore, Batgirl cuts him off mid-sentence with “I’m not interested in lies, Mr. Moore.” Ha! I’d love to hear someone use that at a White House press conference.

I like what Mairghread Scott does in this issue. She lets us ride along as Barbara peels back a couple more layers of mystery, shows her working through frustrations by taking down a thug, and gets inside her head as she works this case as both Barbara and Batgirl, being careful not to let one identity bleed over to the other. There’s a nice balance of storytelling here and I’m looking forward to more of it next month. – Rob Veatch III