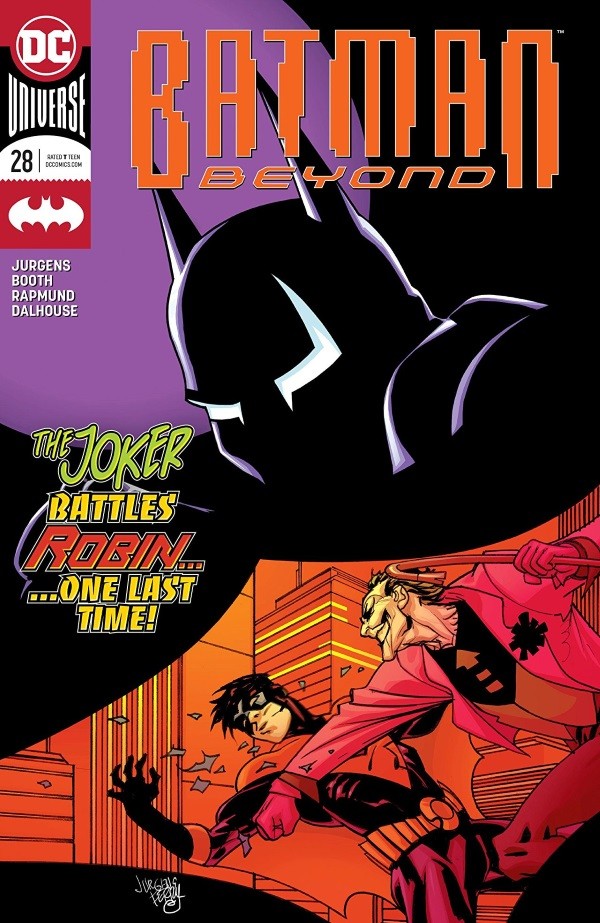 SYNOPSIS: The Joker prepares to deliver his fatal punchline: everything and the kitchen sink hits the fan for Batman and Robin, and even with Dick Grayson’s help, the Dynamic Duo of tomorrow and Bruce Wayne may not stand a chance. Will Joker turn Terry’s brother into the new Jason Todd? Is now a good time for Terry and Bruce to clash? And why are Neo-Gothamites cheering on the Clown Prince? Will anyone survive “The Final Joke”?

Question: What do you get when you give the Joker access to high-tech, futuristic cybernetic enhancements?

Answer: An ultra-formidable killing machine hell-bent on the destruction of Gotham and the Bat-Family!

There was no shortage of action in BATMAN BEYOND #28. Dan Jurgens cut right to the chase and kept his foot on the gas the entire time. The tension between Bruce and Dick comes to a head and Dick takes matters into his own hands. Most of the action is between Terry, Matt, and The Joker ‘borg, which is a good thing. Hopefully, it means that Jurgens is comfortable in having Bruce hand over the reigns a bit more to Terry and Matt instead of having an increasingly geriatric Bruce fight every supervillain that pops his/her head up.

The writing is what you expect at this point: very solid. Dan Jurgens remains one of the more consistent writers out there today in my mind (props to the Dick Sprang reference–always nice to see respect paid to the history of the character!).

On the art front, Norm Rapmund and Brett Booth put in another commendable effort. Once again, everything looks great. From character and background designs to panel layouts, these guys are really good.

The most exciting part of this issue is the promising set up for the next one. Much like we got to revisit The Killing Joke previously, we’re going to get a callback to another monumental Joker-centric story in the next issue.

After a bit of a stumble last issue, Jurgens has definitely picked up some steam this month. – Matt Whaley