SYNOPSIS: Bruce Wayne may be a dead man in the eyes of the villainous Magistrate, but this dark detective isn’t through yet! In this pulse-pounding finale, Bruce makes his final move and comes face to face with the man at the top of Gotham’s oppressive regime, Peacekeeper One! With bombs planted and the trap waiting to be sprung, this final battle will decide the fate of Gotham City once and for all… 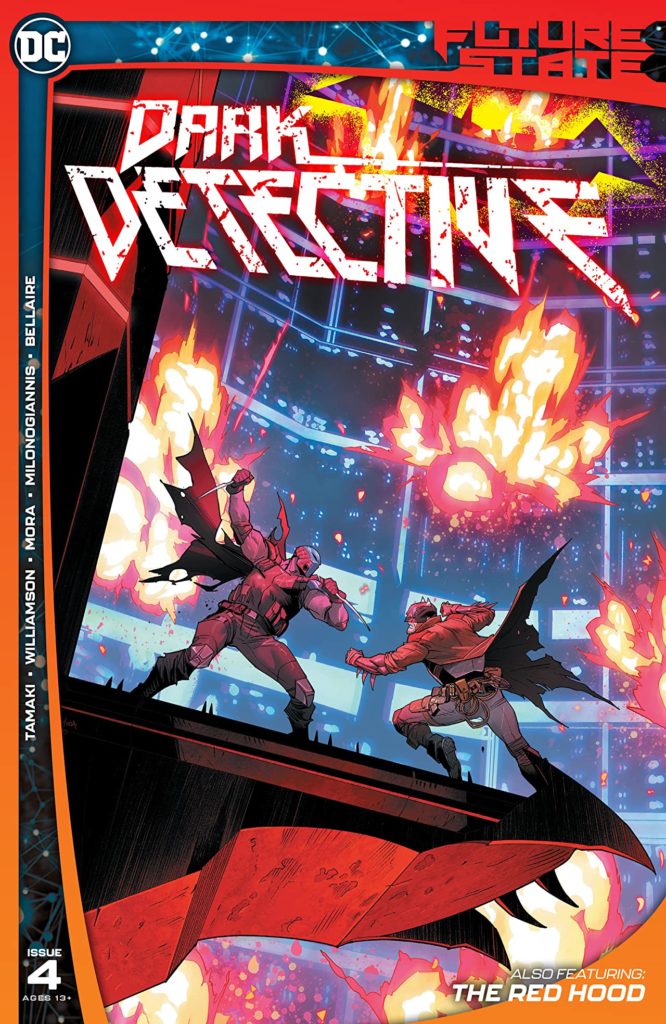 Ladies and gentlemen, fanboys and fangirls, readers of all ages!  The fourth and final issue of DC Future State Dark Detective is upon us.  Writer Mariko Tamaki has done a splendid job of keeping the reader invested with every turn of the page, but can she seal the deal and wrap of this mini-series with a beautiful bow on top?  Artist Dan Mora has delivered beautiful pencils and some of the most creative page layouts while taking inspiration from some of your favorite science fiction and action films.  The new dynamic duo in Gotham City is Tamaki and Mora.  Now let’s get to the review!

Tamaki left us hanging in the last issue; Bruce Wayne has been doing his due diligence and bringing his work home with him but at what cost?  Well, as always, old Brucie is one step ahead of the Magistrate and Peacekeeper-01.  Now here is where Tamaki lets the creative juices flow.  We have been reading about a Bruce Wayne on a journey back to the top for four issues, trying to reclaim himself as Gotham’s hero but is Bruce Wayne the actual “Dark Detective”?   Here Tamaki throws the ultimate curveball, and the reader might as well be Pedro Cerrano at the plate.

Tamaki has been teasing the readers with a more prominent role for Hannah, the daughter of Bruce Wayne’s paranoid land-lord Noah throughout the series.  Hannah’s been doing just as much detective work on the Magistrate as Bruce Wayne. This little twist is just what we love to see from writers. We all love seeing Batman being the top dog in town, but in the 80 plus years of his history, we all know he can’t do it alone.  Even Noah himself unknowingly helped Bruce Wayne in defeating the Magistrate. This issue did come full circle in so many ways.  Bruce picked the right place to hide in plain sight, to keep his ear to the ground and allow him to get back on his feet, the right place, and the right people.

Hannah and Bruce have the same mission, stop and expose the Magistrate.  Tamaki uses a race against the clock technique to finish off the issue as Bruce Wayne takes on Peacekeeper-01 in a fight to the finish.  Some might feel a bit let down that there was not more behind Peacekeeper-01. He may come off to some as a disposable villain.  Remember, this is a story all about Bruce regaining his confidence, picking himself back up.  It’s almost the rebirth of Batman and how ironic since the last DC initiative was titled “Rebirth.”  The villain of the story was not one character as much as society as a whole; this story was much more profound.  It’s a story about the people vs. the government. Bruce Wayne was and is always a man of and for the people.

Once again, we are blessed to have Dan Mora illustrate this story.  Mora doesn’t cut any corners.  Every page, every panel is filled with details and expressive emotion.  Early on in the book, Mora presents holograms and monitors similar to the 2002 Tom Cruise film Minority Report. He is keeping up with his theme of honoring sci-fi films of the past.  Mora shines with the Hannah/Bruce interactions first in the apartment and later in the van.  Panels filled with rich emotion and complex facial expressions.  You don’t need to read a word; you get a feel of what is going on by reading body language, a mark of a masterful artist. When Bruce dons his cowl for the finale, this is some astounding craftsmanship.  The last eight pages are a highlight reel of everything Mora is capable of; no holds barred artistic creativity on display. Even the smaller panels of Batman perched above the city are as stunning as a splash page.  Mora’s two-page spreads are majestic and bold.  The only nitpick, the fight choreography towards the end is not as easy to follow as previous issues, but the actual artwork is still jaw-dropping.  Mora’s Gotham City fully embraces the vibe of Batman Beyond’s Neo Gotham. Some of the skyline architecture looks like it was pulled right from the show, making the city itself another character and not just a backdrop. You will not find a more beautiful interpretation of explosions and destruction in the comic shop this week.

Dark Detective has been the standout series among the Gotham-based tales. Tamaki has shown she has the chops to write a gritty, investigative story perfect for Batman in only four issues.  She crafts twists and turns, leading the reader down a path they did not know they were on, keeping you on the edge of your seat without cheap tricks using emotion to drive the story.  Tamaki knows what makes not just a good Batman story but a significant issue of Detective.  Having her team up with the artistic talents of Dan Mora is just the one-two punch that will have fans craving for more and local comic shops selling out of Detective Comics every month.  Get those pull list e-mails in on time if this was just a taste of what is coming. Then we are all going to be in for a great run of stories!

I will close my review with a little review of Future State as a whole.  Having read every issue of DC Future State to date, all thanks to the advance review copies we are lucky enough to receive.  I have purchased the books that I felt deserved my cash even after reading them for free.  I would rank the Gotham City edition of this event as follows:

I’d also highly suggest reading these non-Gotham-based Future State titles, Swamp-Thing, Immortal Wonder Woman, Wonder Woman, Suicide Squad, and Superman: Worlds of War.  These are what I believe to be the best of the best.

In a category, all it-self is Green Lantern because it’s the only Future State title where the backup issues are above and beyond better than the main story. It is just a bit odd how that worked out, honestly.

Future State was a fun two-month mini-event, and I had some doubts going in.  Many of these are anthology books, various price points, backup stories that flow right into some of the main ones.  It was an exciting approach, and for the most part, I feel it worked pretty well.  Though I am happy, we will be getting back to main continuity, for the most part, come March.

The next time we talk “detective” will be after the release of Detective Comics #1034 on 3/24/21.  It will be a post-Snyder Cut world, and we will be in the thick of DC’s new initiative Infinite Frontier.  Happy reading all and support those local comic shops.  Don’t buy digital! – Peter Verra