SYNOPSIS: The Producer’s scheme is in motion, and the GTO is on high alert as Gotham’s hope of a peaceful new horizon begins to collapse. Rattled and recovering from a close encounter with Starlet, Harley examines whether her complicated past with villainy is a burden or a boon to her new identity. She weighs two final options: break all ties and retire to a quiet life, or embrace the chaos, risk, and responsibility of protecting the people and the place that created her. The choice itself may be fantasy, as a targeted attack on Harley ends in tragedy and drives Bruce to a reckless decision that could extend his prison sentence indefinitely. 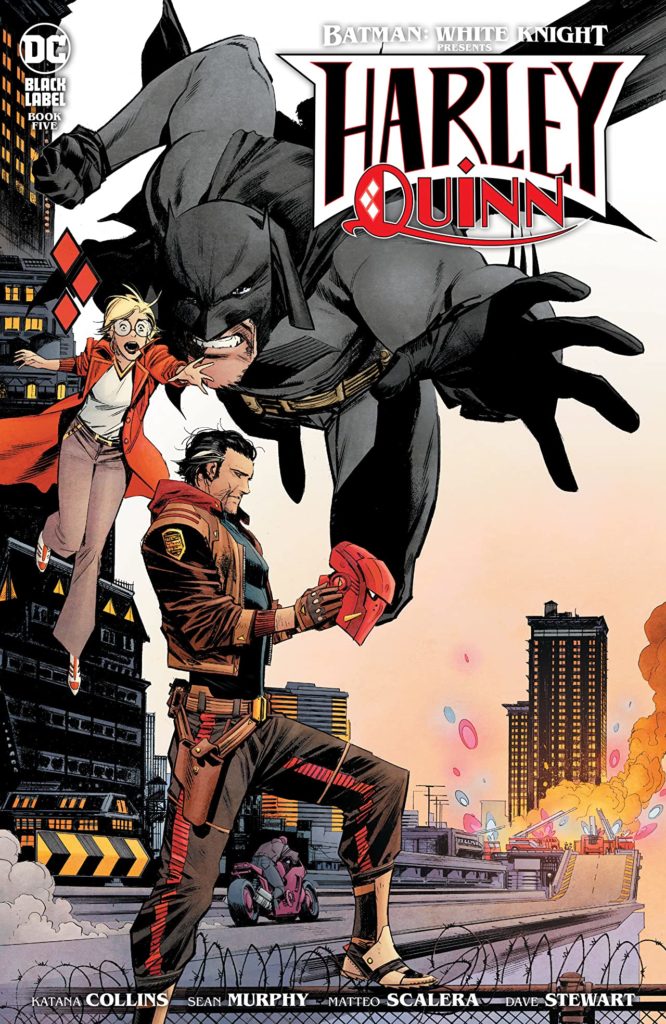 Our story is coming into focus as we approach the grand finale of this first WHITE KNIGHT spinoff series. Leaving off last month with a major confrontation, we pick right up to see how it ends, and the state Harley is left in. As she recovers, we receive more flashbacks to shed even more light on how she got involved with Mistah J and donned her black & red jester outfit. With the villain(s) on the loose, she’s got a target on her back, and so do the ones she cares most for.

I feel like I open my reviews for this book saying the same thing: this is a solid, comfortable comic book story. It’s digestible, fun, dramatic, and exciting. ALL of that is meant as a compliment toward writer Katana Collins. It surely must have been daunting to consider following up creator (and husband) Sean Murphy’s two WHITE KNIGHT stories, but she’s doing it perfectly. I’ve really enjoyed how this series is on a smaller scale, making everything feel so intimate. Plus, while it definitely is a Harley Quinn story, we get our fillings of some Batman. In this issue, even a little Jason Todd…but I won’t go any further as to not spoil anything.

Matteo Scalera continues to exceed all expectations. I’ve loved everything he’s done up to this point, yet he still manages to surprise me with each issue. The soft depictions of each character mixed with that unique blend of coloring give each page an original, dark feeling that is magnetic to the eye. I can’t wait to see what he does next.

This is a really fun comic book story. It expands on the WHITE KNIGHT universe with great characterizations. The mystery is slowly unfolding while also shedding some light on previous relationships we’ve already been exposed to. It’s been a fun ride and I really look forward to whatever this team has in store for the grand finale. – Ryan Lower