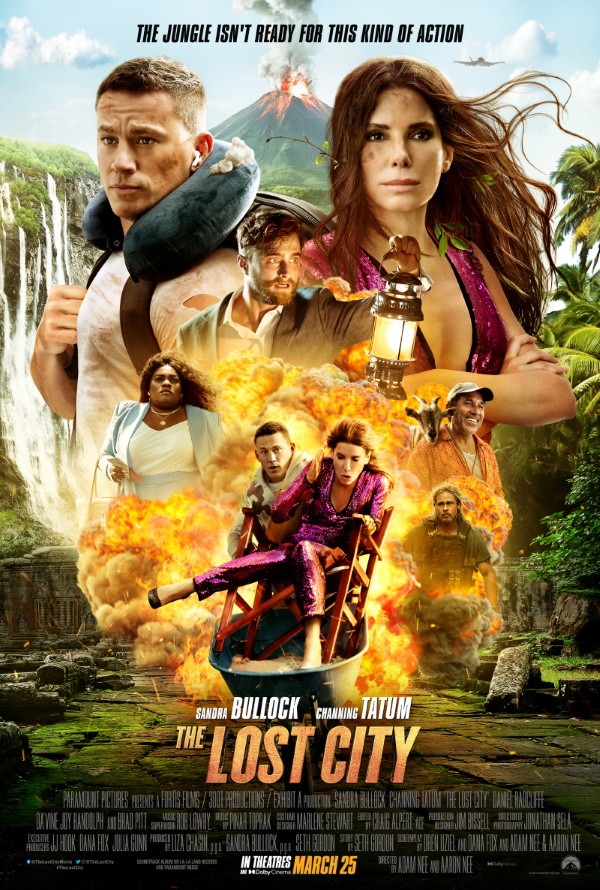 The Lost City, starring Sandra Bullock and Channing Tatum, provides a fun little romp into fantasyland if you’re in the mood for some escapism. If you’re looking for a serious piece of filmmaking, you won’t find it here. That said, it’s a decent, popcorn, matinee type film.

Directed by Aaron and Adam Nee, it almost pulls off a successful spoof of romance/action films — that is until it begins to take itself too seriously. It draws heavily from Romancing the Stone (1984) and its 1985 sequel Jewel of the Nile with a little bit of Mission Impossible thrown in.

Sandra Bullock plays successful romance novelist Loretta Sage who’s been a depressed recluse since her husband’s death 5 years earlier. It’s taken her this long to finish her “last” novel. Channing Tatum plays Alan Caprison who is her cover model. He often confuses himself with Dash, the hero of the novels he represents on each cover.

Loretta’s agent Beth Hatten (Da’Vine Joy Randolf) has arranged a publicity tour, something Loretta definitely doesn’t want to do. Beth convinces her that she must promote the book as if her career depends on it because it does. Alan is all in for the tour since he’s its main draw for adoring fans.

Reluctantly, Loretta abandons her usual clothing, sweats, for the garish, magenta-sequined jumpsuit that Beth has rented for her. Her novel is based on the legend of a lost city containing the tomb of a king and his queen. The legend speaks of a bejeweled ruby crown which happens to be the target of an eccentric billionaire Abigail Fairfax, brilliantly portrayed by Daniel Radcliffe. His maniacal search for this treasure leads him to kidnap Loretta because he believes only she can translate a fragment of a map he has found. He refuses to believe that the book is fiction.

Alan, assuming his Dash persona, is determined to rescue her and convinces Beth to hire a soldier-of-fortune, gun-for-hire, ex-Navy Seal Jack Trainer, hilariously played in an extended cameo by Brad Pitt.

The whole rescue sequence gives Sandra Bullock the opportunity to show her skill at physical comedy and her absolute bravery in looking completely inept for the sake of the plot. Channing Tatum proves equally adept as he displays none of the characteristics of his alter ego, Dash. Both characters, however, are allowed to grow in competence, maybe a little too much, as the narrative progresses.

The Lost City was filmed on location in the Dominican Republic providing some breath-taking scenery. The many stunts are equally breath-taking and sometimes humorous. Escape by chair and a leech-removing bit in a river got the most laughs.

The language of the romance novel genre is spoofed although there’s no actual sex in the film — just a lot of innuendo. There is violence, some nudity, and a few bad words, hence the PG-13 rating. If you’ve seen the trailer, you’ve seen Channing Tatum stripping down, so that won’t be a surprise.

For the most part, The Lost City is entertaining, but it loses some of its charm when it gets a bit too serious in the end. There’s a plot twist that you may or may not see coming that provides an epiphany for some characters and leads to a fairly unrealistic conclusion. The conclusion heavily suggests a sequel, but that may depend on how it does at the box office. If you’re looking for a little frolic that doesn’t require too much thought, The Lost City is your ticket. – Jo Anne Hyde