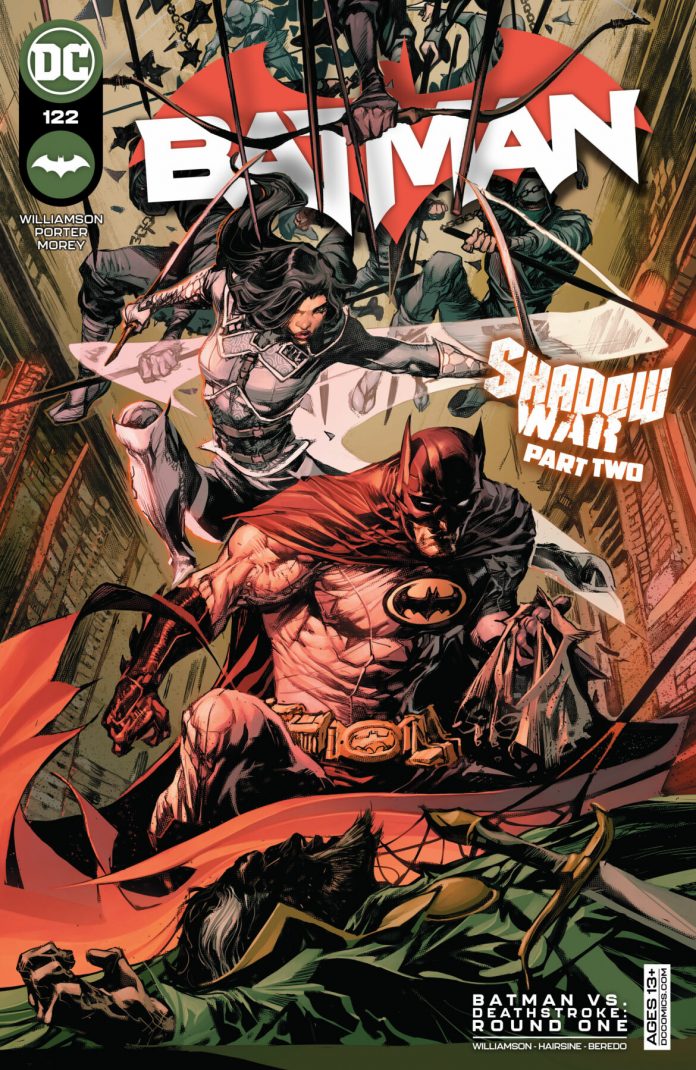 SYNOPSIS: Ra’s al Ghul is dead, and Talia is out for revenge! Batman is on the case to find Deathstroke before Talia’s elite killers do! But Batman starts to piece together that not everything is what it seems in Ra’s‘ death… and knows whom he must interrogate to get answers…Talia herself! Can the two former lovers ever work together again?

A new crossover story began last month in “SHADOW WAR ALPHA” and will be crossing into the main BATMAN title for the next two months. After a strong start in that issue, I had genuine optimism for the story that Joshua Williamson is crafting.

This week’s BATMAN #122 brings us to chapter 2 of this 9-part series. Following the assassination of Ra’s al Ghul, Batman looks into the motivations behind the “alleged” shooter, Deathstroke. Somehow, the expert marksman hit his target with one shot, but fired multiple times at Talia and missed. Meanwhile, Slade Wilson is fighting ninjas who are hellbent on revenge, while his daughter and Damian Wayne are seeking to take him down also.

There’s a lot of story crammed into this 20+ page comic. Williamson has included elements from his runs on the ROBIN and DEATHSTROKE INC. titles, yet if you haven’t read those books you won’t be lost here. I’m not usually a massive fan of events in multiple titles, but this story is working for me so far. Batman is the star of this issue and does some great Batman things. However, it’s also making sure to build on the first chapter, and lays the groundwork for where we’re heading next. Williamson is a great storyteller, and I like what he’s presenting to us so far.

Howard Porter tags in for the art duties here and does a great job. I personally enjoy his style, and how it takes advantage of the comic book medium. We get to see heroes and villains dressed up and kicking each other’s asses. It’s pure fun and the artist’s enthusiasm bleeds through the pages.

Also, as has been happening for quite some time, we get a backup story (also written by Williamson) that is an interesting short tale that ends in an intriguing cliffhanger. It put a smile on my face.

Overall, BATMAN #122 is a fun chapter in this crossover event. I understand if those usually aren’t your thing, but I’m impressed thus far with the story and will definitely track down the remaining issues. – Ryan Lower