A thoroughly cinematic drama, Elvis’s (Butler) story is seen through the prism of his complicated relationship with his enigmatic manager, Colonel Tom Parker (Hanks). As told by Parker, the film delves into the complex dynamic between the two spanning over 20 years, from Presley’s rise to fame to his unprecedented stardom, against the backdrop of the evolving cultural landscape and loss of innocence in America. Central to that journey is one of the significant and influential people in Elvis’s life, Priscilla Presley (Olivia DeJonge).

I am a lifelong fan of Elvis Presley and I have been waiting for Elvis to get the big-screen biopic treatment for most of my life.  A biopic that would tell Elvis’ story truthfully and respectfully…warts and all.

Baz Luhrmann’s ELVIS is THAT movie and it did not disappoint.  In fact, it exceeded my extraordinarily high expectations.

Austin Butler plays Elvis from the age of 19 when he burst onto the scene in 1954 with “That’s All Right Mama” to age 42 when he died in 1977.  Butler’s performance is definitely Oscar-worthy, but the fact that he did his own singing for the “Young Elvis” songs from the 1950s makes it even more remarkable.  Butler absolutely nails Elvis’ mannerisms, his voice, and his on-stage moves.  But make no mistake, this isn’t Butler simply doing an Elvis impersonation.  It’s a great acting performance first and foremost and it moved me tremendously.  He simply WAS Elvis in this film. (And anyone who thinks Baz Luhrmann should’ve cast a damn Elvis impersonator in the role is insane!)

Though the film is titled ELVIS, the story is told through the eyes of Elvis’ longtime manager, “Colonel” Tom Parker (Tom Hanks).  One might assume that since Hanks’ Parker is the film’s narrator, then the narrative would be skewed to come off as making Col. Parker a good guy.  That, however, is not the case.  Col. Parker is definitely “…the villain of this-here story” as he proclaims early in the movie.

Parker fancied calling himself “The Snowman” and took great pride in his ability to play and get over on people.  The fact he used Elvis’ neverending fear of returning to poverty in order to manipulate him and his family (in particular, Elvis’ father Vernon portrayed by Richard Roxburgh) is borderline evil.  However, it’s clear that Elvis would’ve never quit the Colonel regardless of the latter’s shenanigans nor the former’s desire to do so. It was definitely a love/hate, codependent relationship…one that neither man could leave.

The rest of the cast were all great — though the roles were small compared to Butler and Hanks.  If I had to pick a standout performance amongst these folks, it would be Darce Montgomery as Steve Binder, the producer of what is known as The ’68 Comeback Special.  This segment of the film also provides a bit of comedy as Binder, the other producers, and Elvis do exactly what they want to do despite the fact Col. Parker had promised NBC a family-friendly Christmas special with Elvis singing “Here Come’s Santa Claus” while wearing an ugly holiday sweater!

Another thing I really loved about ELVIS was its depiction of how much Elvis loved African American music and the great Black artists of that era.  Hopefully, the film will help dispel the BS that Elvis was a racist and stole from African American singers and musicians.  Additionally, it was great to see Baz Lurhmann include Little Richard, “Big Mama” Thorton, B.B. King, Arthur “Big Boy” Crudup, and Fats Domino as characters in the movie and give those people their due.

RELATED | BOF’s Everything About ELVIS Page

Be prepared, ELVIS is not your standard biopic — i.e. it’s not Elvis’ WALK THE LINE.  If you’ve seen Baz Lurham’s previous films, you know what to expect.  It moves fast, jumps around, and is very stylistic.  It’s probably Baz and his most “Bazziest,” if you will.  Furthermore, Baz likes to include contemporary music in his period films and ELVIS is no exception.  In fact, I’d say the soundtrack of the movie is a character of its own and adds significantly to it.  As an Elvis fan, I’m of the belief that he would have loved the covers and remixes of his songs as well as original material like “Vegas” by Doja Cat because he himself did covers and “remixes” of the songs he loved.

For the “Elvis Purists” who may happen upon this review, Luhrmann takes some creative liberties at times as well as combines events in Elvis’ life which are shown as singular events in the film.  Also, some events depicted in the film happen before or after they actually did during Elvis’ lifetime. For example (and it’s not a spoiler), Elvis is shown buying Graceland at some point in 1956 when he actually purchased it in 1957.  As a diehard Elvis fan and someone who considers himself an amateur Elvis historian, none of it negatively affects the film in the least nor its portrayal of Elvis’ life.  In fact, I’d say these choices made ELVIS a better film.  If anyone lets the fact that Elvis Presley never sang “Trouble” in concert in 1956 negatively affect their experience watching ELVIS, well, bless their hearts.

ELVIS, of course, does not have a happy ending.  However, it should be considered a very happy event as a whole because it celebrates the life of Elvis Presley spectacularly.

PS: Major props to Baz for acknowledging the fact that Elvis was an OG comic book fanboy and included it as part of ELVIS‘ storyline! 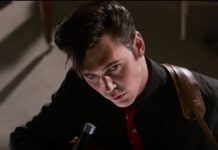