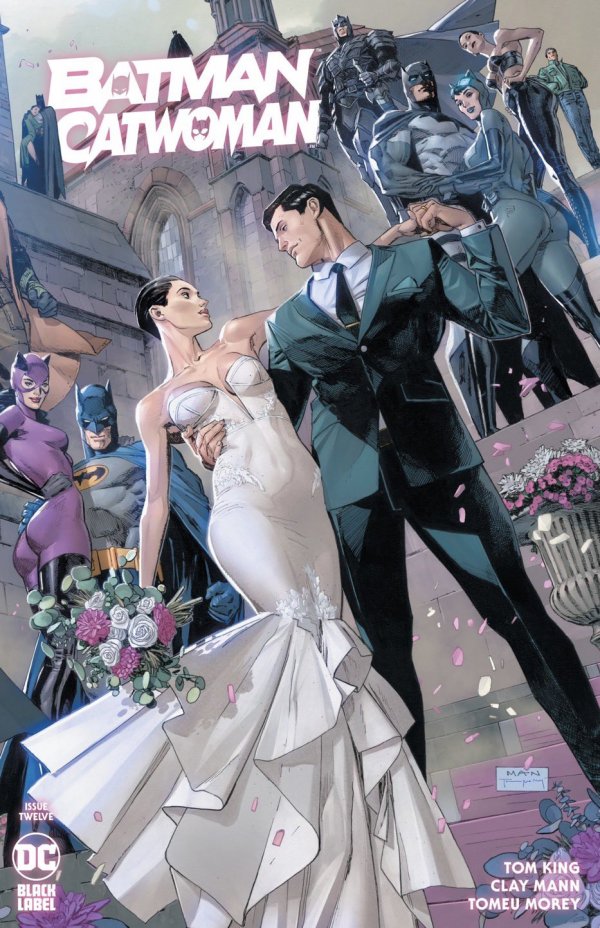 SYNOPSIS: Wedding bells are finally ringing for Batman and Catwoman! As our story concludes, the lovers prepare to take the next steps in their lives together by trading everlasting vows. The Bat/Cat wedding is here, and knowing Bruce and Selina, it’ll be anything but conventional. You won’t want to miss this final chapter of Tom King’s Batman epic!

“Why does anything happen the way it does?”

Good things come to those who wait.

And Bat Fans have waited a long time for this issue and the advertised events therein.

Batman/Catwoman launched under DC Comics’ Black Label imprint back in December 2020, spinning out of Tom King’s run on Batman. As such, it carried forth a lot of his plot points and ideas from that volume, in addition to folding in nods to Batman: The Animated Series and over eighty years of Batman continuity.

Now, after eleven issues and a special, we have reached the end of the road. Given that this series has hit quite a few bumps along the way when it comes to release dates, I sat down and read everything in one sitting, in an attempt to fully grasp what King was trying to say.

I won’t lie and say I didn’t come into this with my own set of expectations. Bringing in Andrea Beaumont as The Phantasm certainly had me wonder if King was going to set up a deadly love triangle, which he did. It just happened to be between Batman, Catwoman, …and The Joker.

Another expectation I had was that Batman would be the main character. With a story sprawled out across three eras, one of which being after Bruce has departed from this world, that just wasn’t so. Despite her being second-billed, this is Selina Kyle’s, excuse me, Selena Wayne’s, book through and through.

And I’m okay with that.

King really explores who and what Selina is. Has her lonely and difficult upbringing made her a villain? Has her love for The Dark Knight allowed her to rise above her nature and become a hero? King’s answer is yes.

However, as is often the case in life, nothing is ever all black or all white. Gray permeates everything, and it does so here. Duality and forgiveness are major themes. The Joker is trying to force Catwoman to decide on her identity and Selena rejects his thesis.

There is very little action in this issue. Instead, King fills the pages with character beats, explaining why Bruce and Selena fit, and why together they are good. As a character who cameos implies, them together is a thrill of hope. Certainly, the existence of Helena personifies that, as her life blesses both her parents and her adult career as Batwoman continues her father’s good work.

Clay Mann’s art is jaw-droppingly stunning. The wrapping paper serving as the panel gutters and cat chasing the mouse all return from prior issues. His sequential storytelling propels you through the emotional beats. There are several standout panels, but among my favorites is Selena holding Bruce in front of the mirror, in a pose echoing the first cover of the series. It brings us full circle to the beginning and takes us to the intimate heart of these characters.

This series has gotten dark and twisted at times. There is certainly an emotional heaviness to be found in this outing, but it does get balanced out with lighter moments. King provides two endings, one set in the future and one in the present.

The future ending was most unexpected. In truth, I’m still digesting what it means. While on the surface it seems oddly celebratory, there is an undercurrent of cynicism. After all, good or evil, no matter what you do, your angel of death awaits.

The final ending, the one set in the present day, is quietly jubilant. I hope fans don’t feel cheated by it. It’s simple, fun, and encapsulates what I wanted to see.

Batman/Catwoman has most certainly been a ride. Would this have worked in the main title? Given the ongoing nature of comics, probably not. I’m happy to think of this as an alternate Earth, one where two people have found each other and found some amount of healing together, despite all the hard work, suffering, and naysayers to achieve it.

For me, King and Mann, not to mention Sharp and Leon, have created an enthralling story of two people in love. It’s not easy, it takes lots of work, and it’s complicated, but it’s worth it. – Javier E. Trujillo