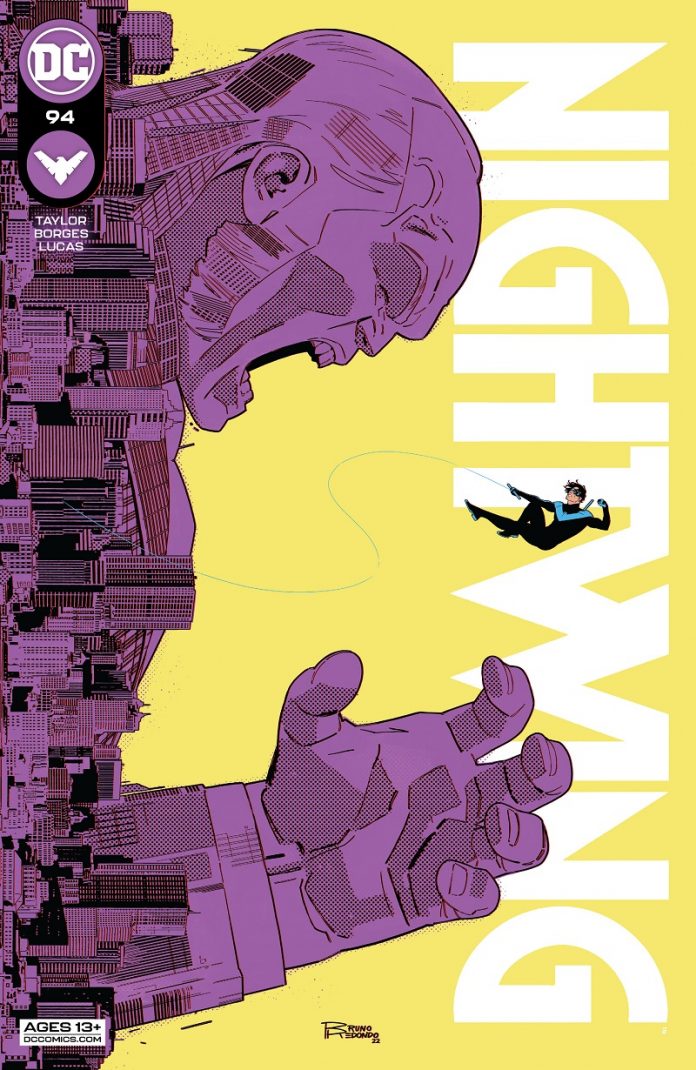 NIGHTWING #94 makes you feel comfortable as our hero has another run-in with the Bludhaven police, complete with his usual quips, but then ups the stakes big time.

After busting the dirty cops for trashing the youth Haven, Nightwing and his allies set their sights on the equally dirty Commissioner Maclean as a means to take down the man behind it all: Blockbuster!

Didn’t dawn on me until now: having the word “clean” in the commissioner’s name has to be a joke, right?

Geraldo Borges temporarily takes over the artwork again from Bruno Redondo. It’s a smooth transition with the only visible difference being Barbara Gordon has fewer freckles and no glasses.

We’re also treated to a swell variant cover by Dave Talaski where Nightwing hangs out with Flash over a cup of coffee. I approve of Nightwing using a French Press to make his cup but the carton of milk nearby is worrisome!

The color in this issue stood out more than normal, credit to Adriano Lucas for that. The whole issue has this light blue and pink throughout. At first, it threw me off as the colors seemed an odd fit for the tidy home of corrupt Commissioner Maclean. As we’re shown more of Bludhaven, especially a striking panel depicting Macleans’s speeding car making a getaway, I loved the look more and more. As a fan of BATMAN FOREVER and BIRDS OF PREY (2020), I appreciate when parts of DC’s cities have a glow to them.

I really liked the extra-oversized limo Blockbuster had in this one. Borges clearly had a lot of fun making Blockbuster stand out in everyday places. Kingpin should have had one of those limos in INTO THE SPIDER-VERSE!

Finally, NIGHTWING #94 is bookended with a beautiful tribute to Neal Adams written by Tom King using Adams’ quotes featured in THE COMICS JOURNAL #72 from May 1982. The tribute includes words of praise for Adams and is drawn by his son Josh Adams. If your eyes aren’t teary by the time you’re done reading it there’s something wrong with you.

The Adams tribute alone makes NIGHTWING #94 worth buying but luckily it has a solid story to go with it. – James Armstrong