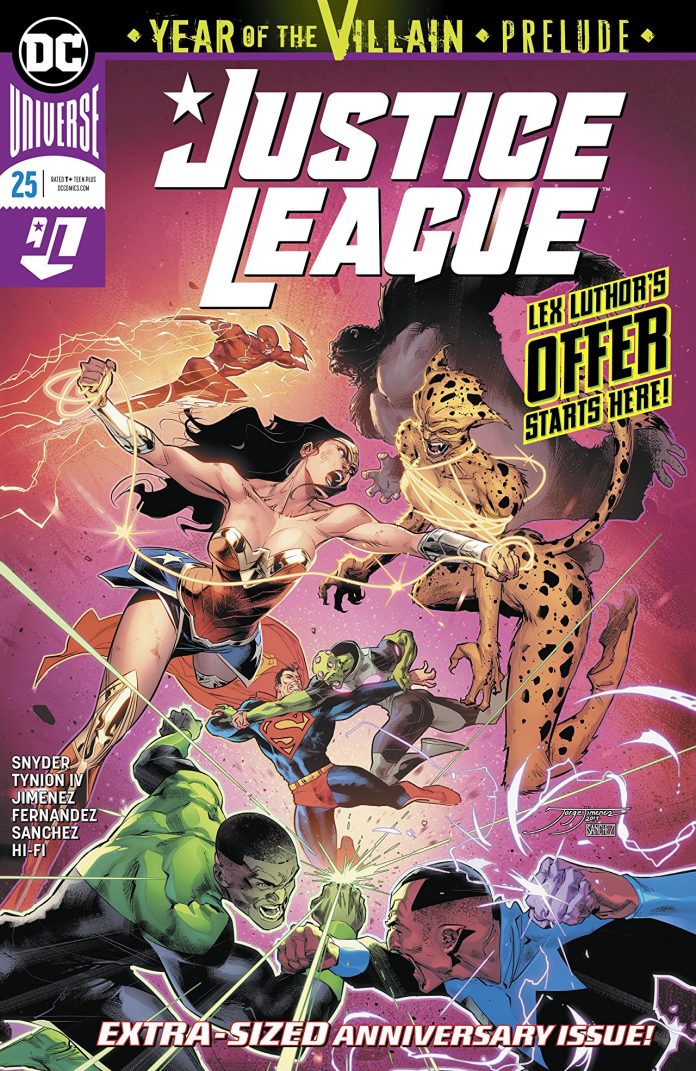 SYNOPSIS: The “Sixth Dimension” storyline wraps up in this oversize issue as Superman faces down the World Forger to save the Justice League! Can Superman withstand the might of a being that can create worlds from nothing?! Plus, with the Justice League away, Mr. Mxyzptlk’s been wreaking havoc! Can anyone on Earth stand up to the fifth-dimensional menace?

Do you think comic creators know when they are producing a fantastic run on a title? Do they recognize when they are on a hot streak like when a basketball player gets in the zone nailing three-pointer after three-pointer? Do Scott Snyder and Jorge Jimenez understand that they are delivering some of the best superhero team-up storytelling in decades? They should because that’s exactly what is happening right now in the pages of Justice League.

Scott Snyder and Jorge Jimenez are the main creative duo again for Justice League #25, an “Extra-Sized” issue serving as the epic conclusion to “The Sixth Dimension” storyline and as a prelude to the upcoming “Year of the Villain” event, but more importantly it’s a fine issue in its own right. It’s such a satisfying read that I hesitate spoiling any of it for you, but that would make for a very dry review so consider yourself warned: Mild Spoilers Ahead!

Snyder really shines in this issue’s Superman work. The previous issues have seen Superman trapped in a low light galaxy designed to keep him depowered and out of the action or kill in his efforts to escape. He’s been driven forward by the memory of his son and father. More specifically, Clark has been haunted by the memory of a perfect day that ended in a personal failure when he forgot to light a paper lantern with Jon in memory of Pa Kent. In the prison galaxy, Superman finds himself running out of time and power, on the verge of dying in the void of a sunless space. There is a primary relationship between Superman and his family that resonates profoundly in this series, surpassing any of the other characters’ connective tissue to the existence they are fighting to save. It’s a character study of Clark Kent, the man who always feels a responsibility to do the best for everyone, who holds himself to such a high standard that the slightest failure weighs on his conscience, and who is determined to be the hero at all costs. It humanizes the stakes of the story and makes them personal.

Snyder’s treatment of Batman is equally impressive here. We’ve been led to believe that Batman has sided with The World Forger, donning an advanced “Sun Bat” suit which will allow Batman to rewrite the minds of the Justice League to abandon their convictions and wage a preemptive war against potential threats to bring about the idealistic and authoritative future, avoiding the wrath of cosmic judges. As usual, Batman has plans of his own and uses the suit’s powers to provide Superman with an opportunity to escape that ties directly into the memories fueling his efforts. Snyder’s ability to build upon and payoff story threads is masterful and it’s on full display here. But more than a plot device, the portrayal of Batman brings something that’s been missing (but also refreshing) from this title; it refocuses the core of the League and this universes salvation on the friendship and partnership between DC’s flagship characters while highlighting who they are and how they operate.

Jorge Jimenez may well be the best artist in comics today. It’s not just that his pictures are sharp and clean, or that his panel design moves the story along in equally breathtaking and awe-inspiring ways. His work adds to the words in a way that enriches them and elevates their impact. There is no better example than a beautiful and kinetic splash page depicting a fully powered Superman in flight with his son and father present with him in memory and imagination, serving as his motivation and his cause.

There is a lot more to love in this book, including new characters playing pivotal roles and a new and surprising addition to the Justice League. The backstory “The Message” by James Tynion IV and Javier Fernandez is a well-executed epilogue to the main story and stirs up plenty of interest for the upcoming “Year of the Villain” while not feeling like a needless tacked on commercial. Tynion hits some of the wording a bit too on the nose in this setup, particularly in a lengthy speech by Lex Luthor, but the stakes of this next chapter are clear. The Justice League will need to grow in numbers and with members from throughout the multiverse to stop the spread of Doom, the full reemergence of Perpetua, and impending cosmic judgment from the others of her kind.

Justice League #25 is a fully satisfying conclusion to “The Sixth Dimension,” an exciting preview of “The Year of the Villain,” and a fine example of the best in the comic medium. Do not miss it. – Garret Grev