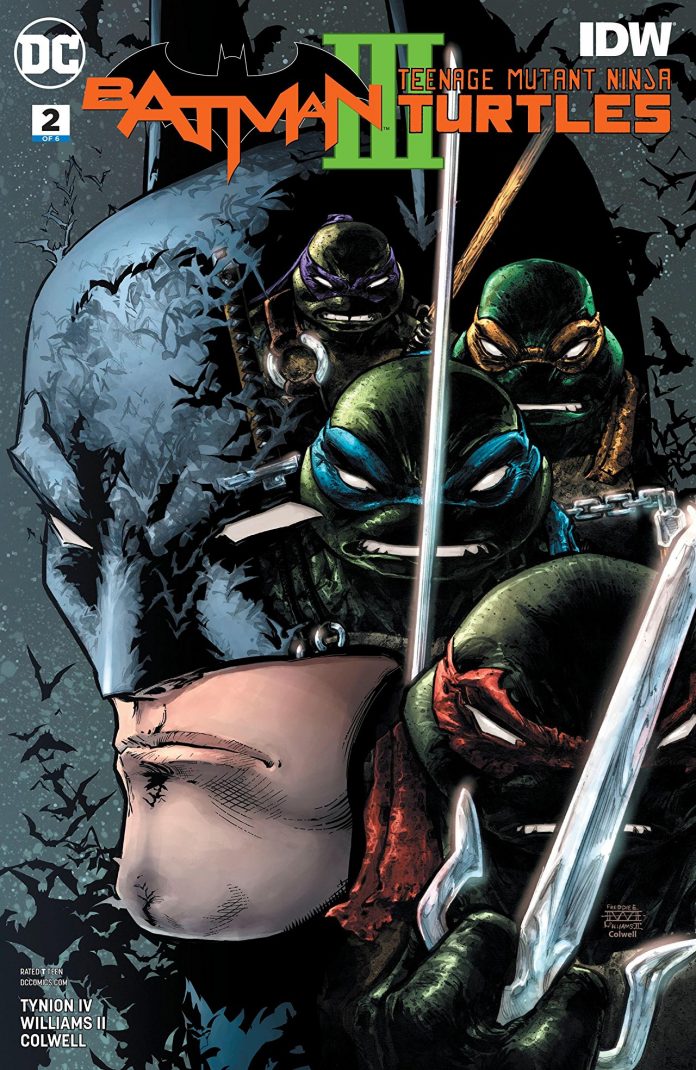 SYNOPSIS: Kevin Eastman, co-creator of the Teenage Mutant Ninja Turtles, joins series artist Freddie E. Williams II as guest artist for the second issue of BATMAN/TEENAGE MUTANT NINJA TURTLES III! Krang’s true power has been revealed, and now it’s up to Batman and the Turtles to stop him, but their only hope may lie with the strange, yet familiar, visitor from another world.

This story is insane.

Issue two of the latest BATMAN/TEENAGE MUTANT NINJA TURTLES III series is bananas. I know that’s what we thought last month, but man they cranked up the crazy here. And you know what? I dig it!

We left off with a black and white Raphael in the Batcave with The Dark Knight, the Turtles and Splinter. Then we got our first look at the real reason for all of this crazy: an Anti-Monitor Krang. Here, we get a full on explanation, and also some pretty sweet fighting. It seems like the b&w Raph is a full-on badass, and cranky (classic Raph). In a nutshell, Krang has collided two different timelines, which has messed up the histories of these two worlds (hence the Batfamily Turtles, Splinter Alfred, etc.).

I’ll admit, I had no idea where author James Tynion was going to take another miniseries with these characters. The first was so lovably entertaining and involved most of our favorite characters in Gotham. The second series brought in more and took us to New York City. So what’s left? This is where Tynion’s brilliance comes in. Not only does he bring us Krang, but instead mashes up all we’ve known and loved to create this mystery. It’s unpredictable for sure, and has endless amounts of surprises. I give all of this praise and I’m not even a massive multiverse and Anti-Monitor fan, THAT’S how great these two issues have been.

When the writer shared his ideas with artist Freddie Williams, he surely started drooling. The opportunities for an artist on a crazy series like this are endless, and he is nailing every panel. I’ve always liked his work with the Turtles, and the previous two series. Here, the designs of everyone are really cool and detailed. His combos of the Bat-family into the TMNT family are spot-on. His settings are fun and ooze comic book. Oh and as a bonus, we get help from Kevin Eastman this month (you’ll know exactly what I’m talking about). How awesome is that?

I can’t praise this issue enough. We are set for a wonderful series here between Batman and the Ninja Turtles. If you missed last month’s issue, it’s not too late and you’re not too far behind. Snatch that up, buy this issue, find a pizza parlor on your way home and have yourself a night. – Ryan Lower

WB Not Having “Hall H” Presentation at SDCC ’19